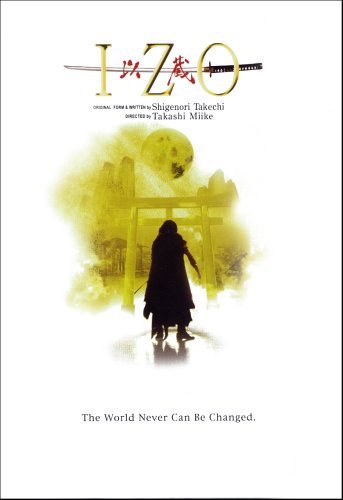 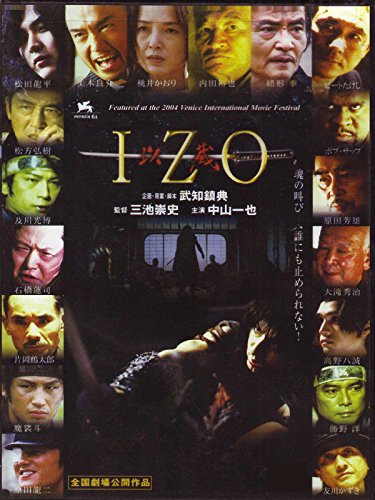 An executed samurai takes an existential journey throughout time, space and eternity in search of bloody vengeance.
We begin in 1865, when the Shogunate is on its last legs, but still capable of punishing its enemies. One is Izo (Kazuya Nakayama), an assassin in the service of Hanpeida (Ryosuke Miki), a Tosa lord and Imperial supporter. After killing dozens of the Shogun's men, Izo is captured and crucified. Instead of being extinguished, his rage propels him through the space-time continuum to present-day Tokyo, where he finds himself one with the city's homeless. Here Izo transforms himself into a new, improved killing machine, his entire soul still enraged by his treatment in his past life. His response to the powers-that-be, whose predecessors put him to death, is the sword.
I am the tally of your soul... Score: 10/10 Izo quite possibly is the best movie on Buddhism ever made. Of course someone else might say it's not about Buddhism at all. Some say it's bizarre and meaningless, who am I to argue with them? Beauty is in the eye of the beholder. Same is with the interpretation of film.

Izo is genius directed, every shot, every motion deliberate. The imagery concise, intimate and undaunted.

The story is a sort of Buddhist Dante's Divine Comedy with allegory's ranging from Buddhist's eight-fold path, and archetypal myths. The dialog is almost a koan, possibly the most sincere take on Zen I have ever seen on film.

Watching Izo, I felt like it all takes place in a desolate plane between life and death. Izo has died, and instead of letting go into death, he is a vengeful spirit who seeks revenge. The Philadelphia Film Fest program guide described the plot of IZO as such:

"A samurai travels through time with just one goal: to kill every single human on the planet."

That basically sums it up. A man takes a sword and hacks away at nearly all the people he comes in contact with. He stabs a military general to death with the help of some zombie soldiers. He slices his own mother's body in half from the waist down. He kills some kids, he kills some businessmen, and he kills a real estate agent who turns out to be a vampiric demon. When he kills infinity (yes, infinity ITSELF, not an infinite number of people) and the movie STILL doesn't end, things start to get a little tedious.

Knowing Miike, you'd be right to expect some outlandish violence, a high body count, and perhaps a mind-boggling plot from all of this. What you might not anticipate is a lot of philosophical mumbo jumbo, World War II stock footage played backwards and forwards, and a guitar player who appears every so often to sing throatily about elephants and flowers. (At one point the camera lingers on this guitarist's face for a full SEVEN MINUTES or so without any cuts or camera movement.)

Though I think I may have liked Izo, I have many criticisms.

First of all, for a film about sword-fighting, IZO lacks both the beauty of HERO and the direct outrageousness of KILL BILL. Quite simply, the fights were poorly choreographed and involved too many cheesy stunts. Izo flies over his enemies a few times, just like the characters in CROUCHING TIGER flew, only less elegantly. Izo dodges a bullet in slow motion just like Neo did in the MATRIX. The sound of a heart beating played over fade-ins and fade-outs just like it does in every made-for-TV horror flick in existence. During the rare times when Miike WASN'T deploying effects that have already been clichéd for years, each sequence seemed to go like this:

For the first ten minutes I didn't mind the lack of special effects or variety, but once I realized that there wouldn't be any progression and that the film would go on like this for a full two hours, I began to feel rather antsy.

The repetitive fight scenes could have been alleviated by some decent cinematography. If you can't give me an engaging plot, at LEAST give me something interesting to look at! But no. The whole movie had a very sloppy vibe, as though it had been rushed through production. Many of the shots seemed haphazardly composed or not composed at all, like arbitrary shots of tree branches and jittery hand-held action footage. Indoor shots were often over-exposed by light coming in from the windows but otherwise under-exposed. I sometimes had the sensation that brief flashes of stock footage were inserted to make up for gaps in continuity. Also, it could be that I saw a worn print, but the first half of the movie had a very brown, drab feel. Perhaps some sharp color could have livened things up.

So yes, the movie was boring, ugly and maybe an EL TOPO rip-off, but somehow I thought it was good anyway. Part of my positive opinion stems from the fact that I admire any director who has a dream and achieves it, no matter how wrong they may be to do so. Also, intellectually, this IS a very engaging film. Since Izo is so unrealistic as a character, the viewer is practically forced to understand his journey as an allegory. In my opinion, Izo represents the grudge mentality: when someone hurts him, or acts like they want to hurt him, he always reacts swiftly and lethally. When a person ignores him or approaches him in kindness (like the schoolteacher, a few of the women, or the children of the future who have learned that nations do not really exist), he lets them pass without harm. His general aim is to destroy anyone who claims to have more power than he does, including the Prime Minister and God. Through juxtapositions with World War II footage, we see that Izo's attitude is linked with Japan's stance during World War II: surrender is dishonorable, but by not surrendering, one is only asking for more violence. In order to stop war, one must cease to threaten it, thereby undercutting the formation of a grudge.

While watching IZO, I felt like I would understand the details better if I were more familiar with Japanese traditions and culture. My feeling was correct. After probing around the internet, I learned that Izo was a true historical figure, a samurai-turned-homicidal maniac. I also learned that the unusual style of music played by the guitarist (fanciful lyrics, anguished voice) is a distinctive Japanese genre that emerged after World War II in response to all the suffering.

Still, I would not recommend IZO lightly, not even to Miike fans. I'm not sure if the film is brilliant or terrible, but overall... life is short and IZO is long. Watch it only if you have the time or patience for such an undertaking.