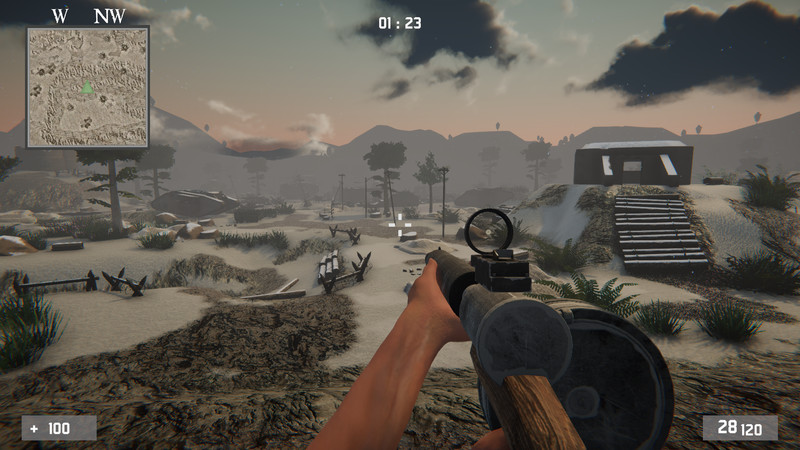 Think back to a time when military shooters were so dominant and important in your gaming schedule, what made them so good? It's simple, They were fun! No boats, tanks or jets to do your work for you - keep those boots on the ground! You are a soldier, you have your guns, your body and most vitally your mettle! Head out, Grunt!

With a distinctly historical arsenal made available to you, you can choose to play any way you want. A selection of the weaponry also contains attachments that were either in use on the field or being tested at the time, giving you lots of options! Unlock more guns as you progress through the ranks to become the ultimate foot-soldier!

What's the forecast? You choose! You can play in clear, rainy or snowy settings in Grunt1914. These selections have a distinct effect on the maps you choose to fight on, as the visibility and controls adapt to the weather cycle at play! As the fog fills the air and the snow piles will you be able to hold your nerve and take that perfect shot? Time will tell!

It's the classic story as we've heard it told many times before, the story of brutality and fear, yet also victory and brave hearts! You can play as either a soldier from the Axis alignment, or the Allies confederation. Take up arms in Deathmatch, Team Deathmatch and Gun-Game modes as you rush to be proclaimed the victor above all others!

Do not desert the battle soldier! Grunt1914 features eight distinct and robust maps to explore and seek triumph in! These are all based on real life locations from novel and peculiar theaters of war of that historical time. Each map features certain unique traits and areas to uncover and unravel, as you make your way through deserts, forests, tombs, military bases, underground hospitals, towns and many more rare areas!

There are no power-ups or buffs to help you here, no super powers or special treatments to be had. Only one thing matters in Grunt1914, your tactics! How you react and the way you play will decide your fate! There are no vehicles or mounts to save you! Your skill is all you have here! Are you a sniper that favors long range kills, are you a run and gun heavy grunt or are you sneaky silencer type? You can be any class you want, as long as you can survive!

Brave the harsh battlefields and arenas with a compass and map in hand, use those senses to locate enemies on the field! All of these are neatly laid out and visible to you at all times, exactly when and where you will need them! Use these tools to your advantage to turn the tide and become the victor when all seems lost!

Aligned Games© was started by me, Johannes Christiaan Nienaber in 2013 as a video-game development studio. At that time I focused on the creation of smaller scale games, but have since moved into developing bigger and better games. I run the studio myself and as such all of its associated video-game are my sole creations. Grunt1914 is my first foray into the PC gaming market. 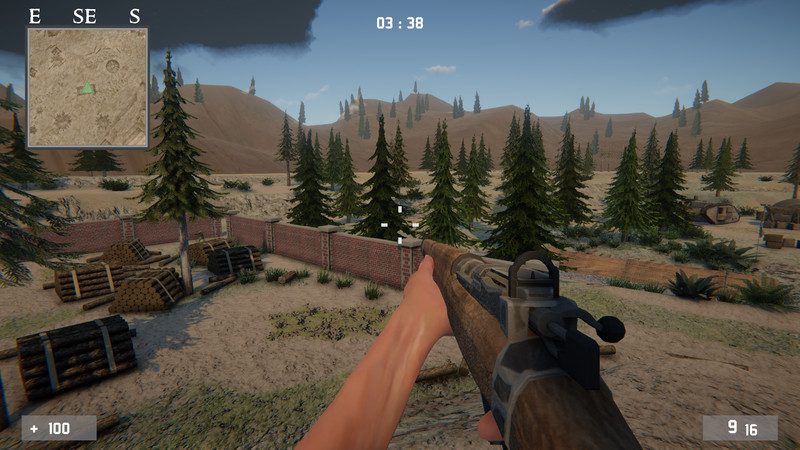 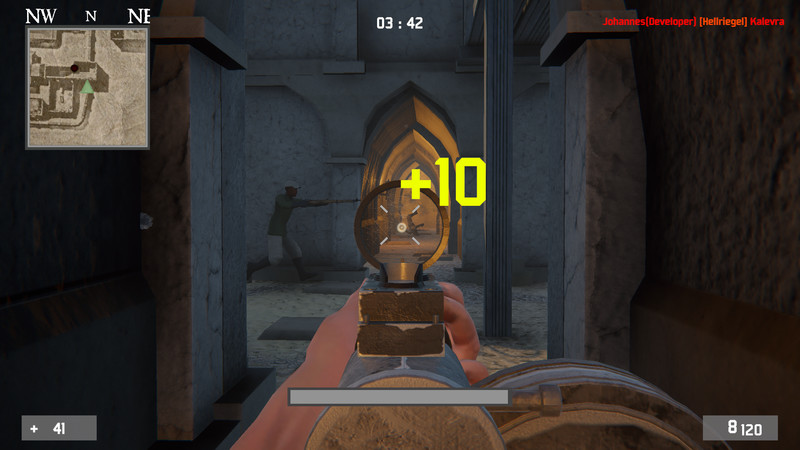 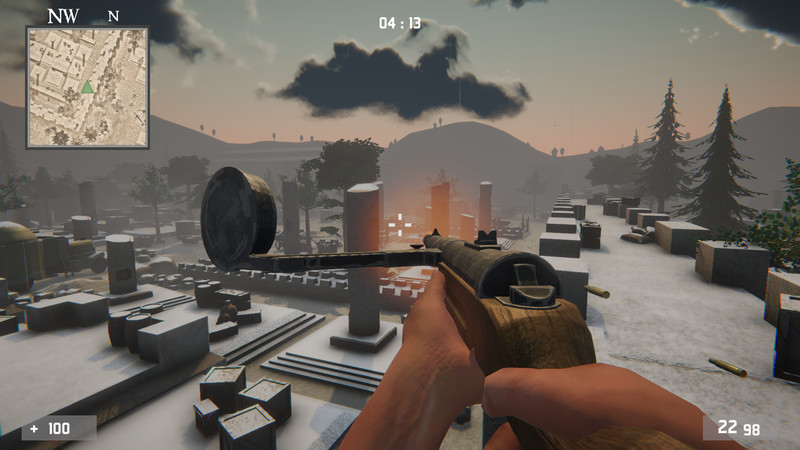 Fun, interesting & fast, Grunt is a perfect example of what a LAN shooter should be.

Here's my experience so far :

- The game has really nice graphics for an Early Access game.
- The variety of guns are really good and they all feel great.
- There are so many great maps to choose from.
- The audio quality is excellent.
- The ability to choose the weather is really unique and cool.
- The developer seems really active with updates.

I easily recommend this game! Give it a try!. I had lots of fun playing this game!

I like all of the maps and guns.. Fun, interesting & fast, Grunt is a perfect example of what a LAN shooter should be.

Would recommend 10\/10.. Grunt1914 is one of those rare indie games where its clear how much effort and work goes into it. I read on the studio's Facebook page that there is only one person that created the game, which is very commendable.

Why I think its great :

- The game has so much content for an indie game. Even with only bots to play against its allot of fun.
- There are 8 maps that are super unique and detailed. And already a new map was released.
- There are many guns to play with, each feels different and unique.
- The graphics are really good for an indie game. There's alot of objects and stuff in the world.
- You can play in first or third person.
- The game is really stable and even though I'm on a laptop I got a really solid framerate.
- Its great to be able to make your own servers.
- There are allot of options to configure the game with.
- You can level up and unlock new stuff
- There are bots to play with.

Things that still need to improve some more :

- Some of the audio sounds didn't sound very accurate.
- Some of the guns needs to be configured a bit more.
- Sometimes the hosting will take a few seconds to get going, this is only a small issue though.
- The bots can sometimes be a bit stupid, to be fair I've seen this in most AAA games too though.

Overall I have to say I really enjoyed the game so far and will definitely keep playing allot. I have seen some people saying that there aren't many people playing but I think the community needs more time to grow. I was able to find a few matches easily so I didn't have that issue. Even without other players the bots still count towards your progression and they are fun to play against.

It seems to me like some of the people that played the game and had negative reviews maybe didn't really play much at all because I had none of the issues they described.

Its obvious how much work went into this game and I would recommend it to anyone that enjoyed the older style of FPS games. This felt allot like the old Call of Duty or Medal of Honor games, which to me is awesome.

With some support and time this game could become really great. The developer also seems to be very active with constant updates and new stuff.

Give it a chance! I did and I love it!

In this update the advanced graphical selection and choices are vastly improved and expanded on. With this update all major post processing features that are used within Grunt1914 can now be tuned. 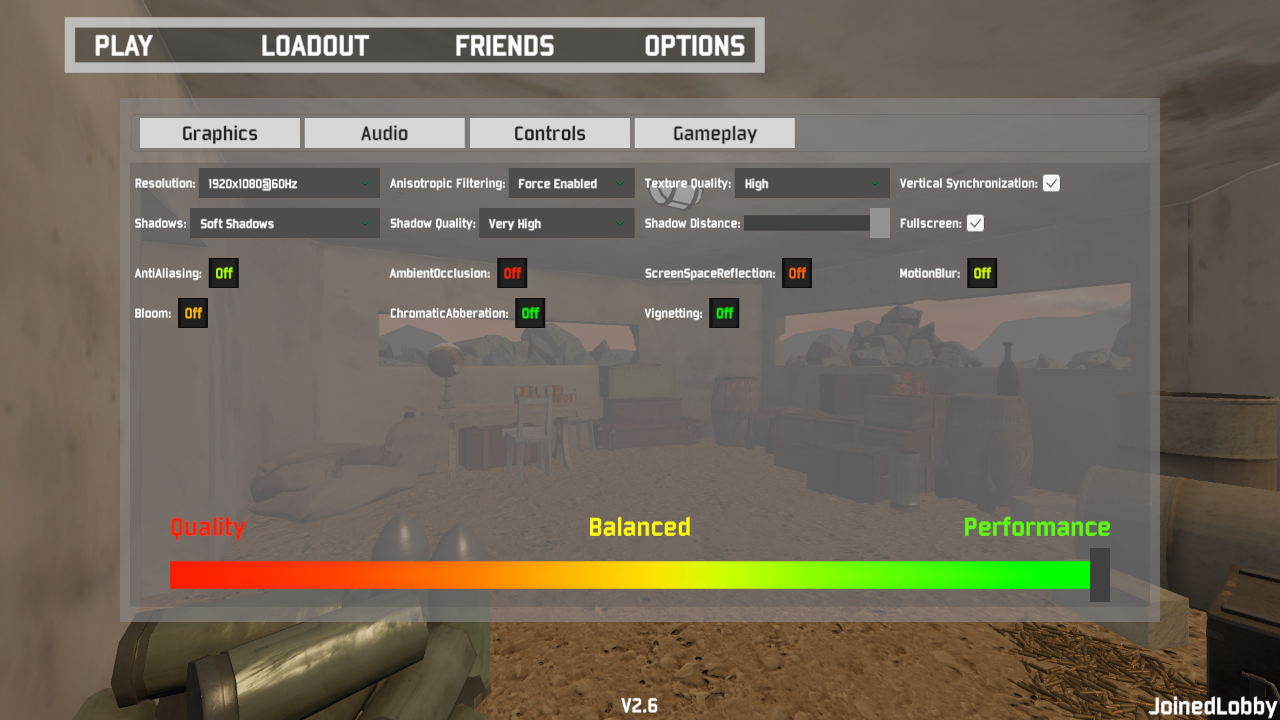 These settings include Ambient Occlusion, AntiAliasing, ScreenSpaceReflection, MotionBlur, Bloom, ChromaticAberation and Vignetting. These all affects performance and fine tuning the settings will get each player the experience they desire in terms of quality vs. performance. 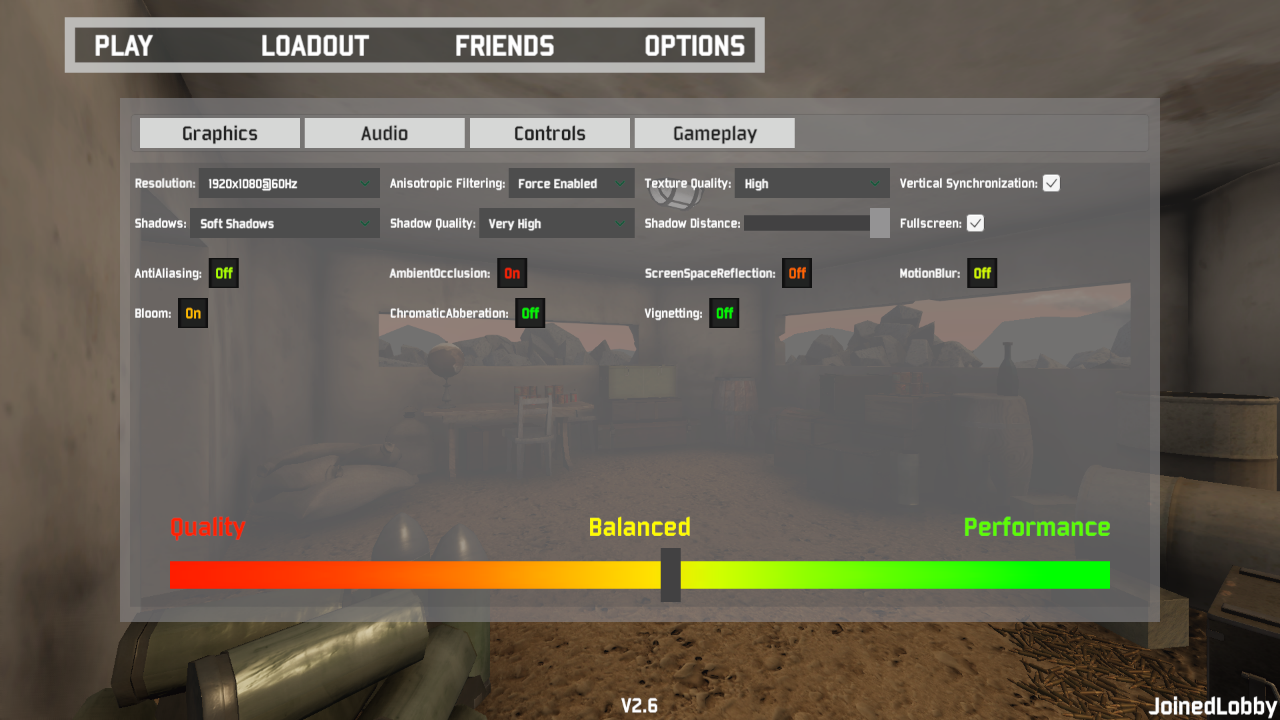 This update aims to improve the experience for players that have difficulty running the game at maximum settings, by providing many more options to select or deselect. 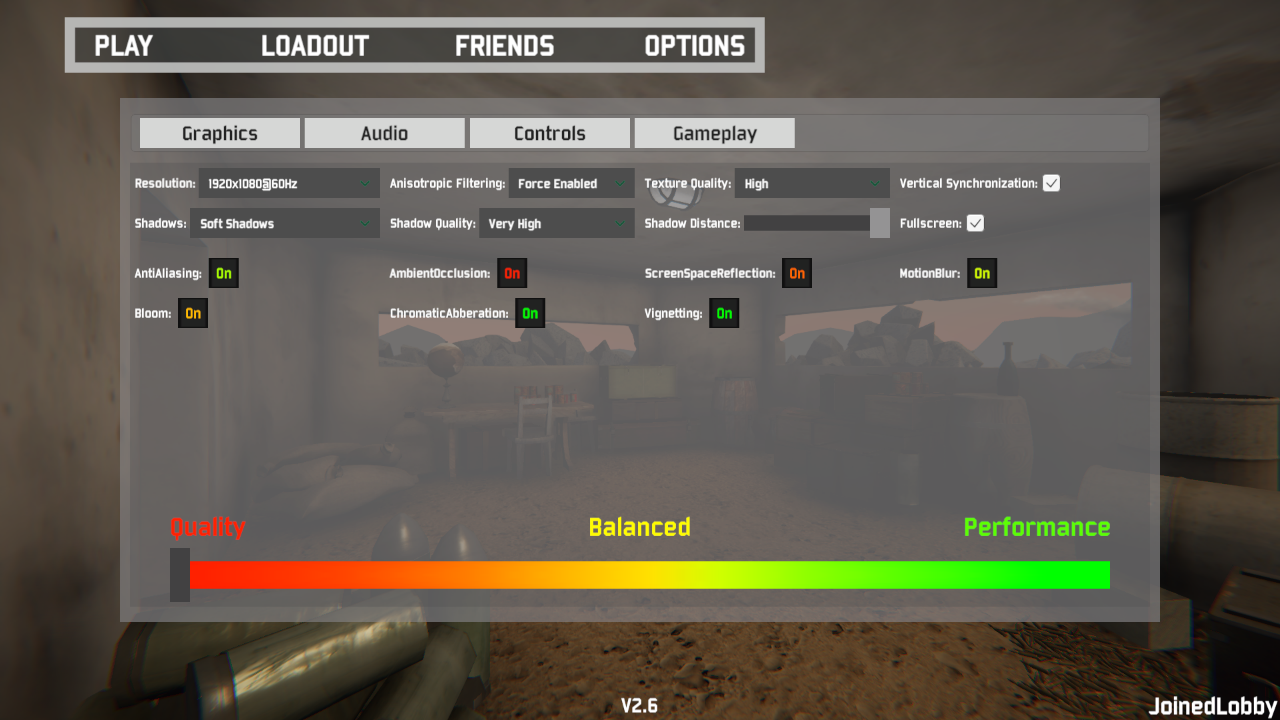 At the bottom of the graphics settings menu there is a ""performance bar", this shows the player what the current state of quality vs. performance is - represented by a color slider. All advanced settings are color coded to represent its level of performance. AmbientOcclusion for example is very intensive so its red, whereas Vignetting is very light, and is then green as a result. 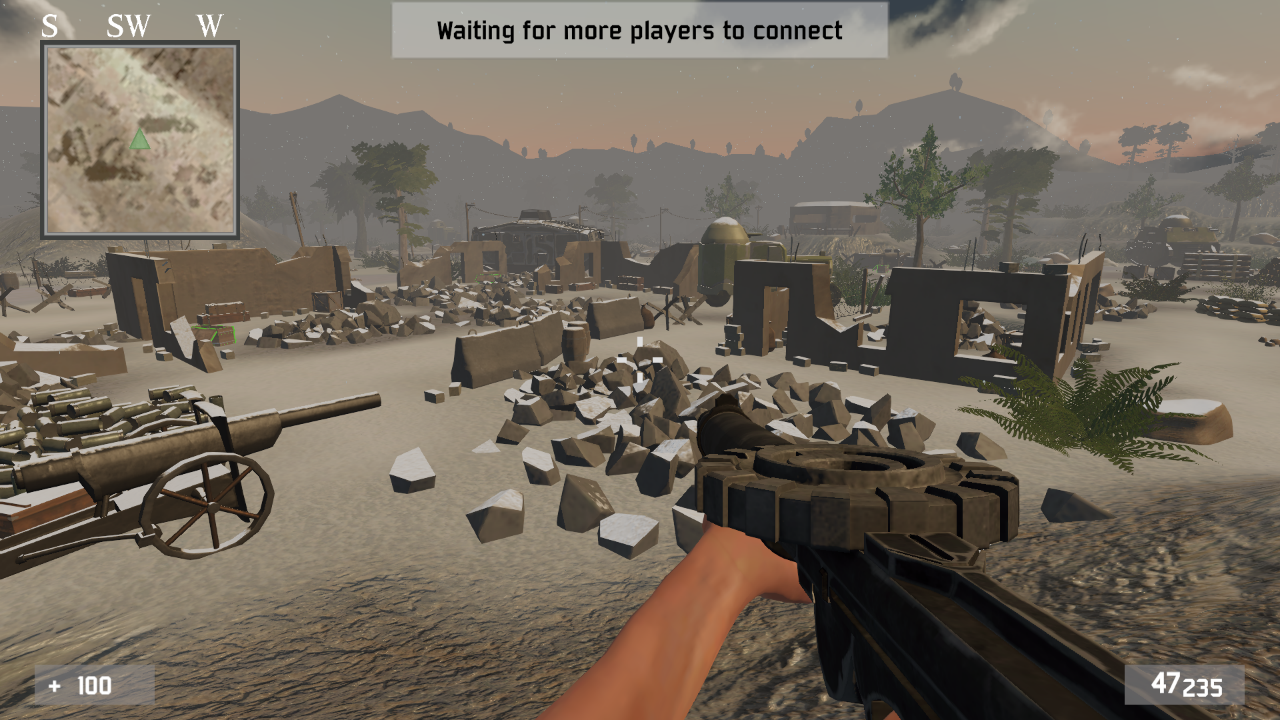 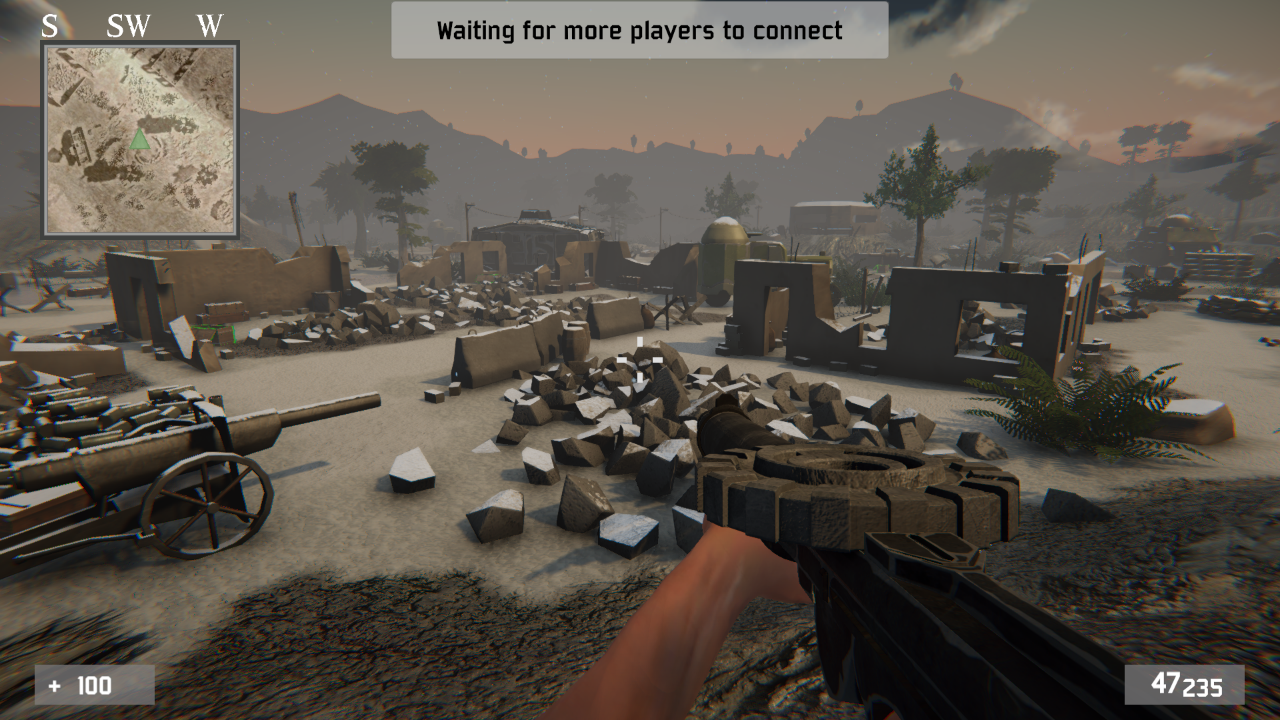 As is clearly represented above, there is a huge gap between maximum and minimum settings, hopefully this will help bridge the performance issues for some players.

This feature is due to be altered further going forward.

In this new update ammo stations are introduced to the game. 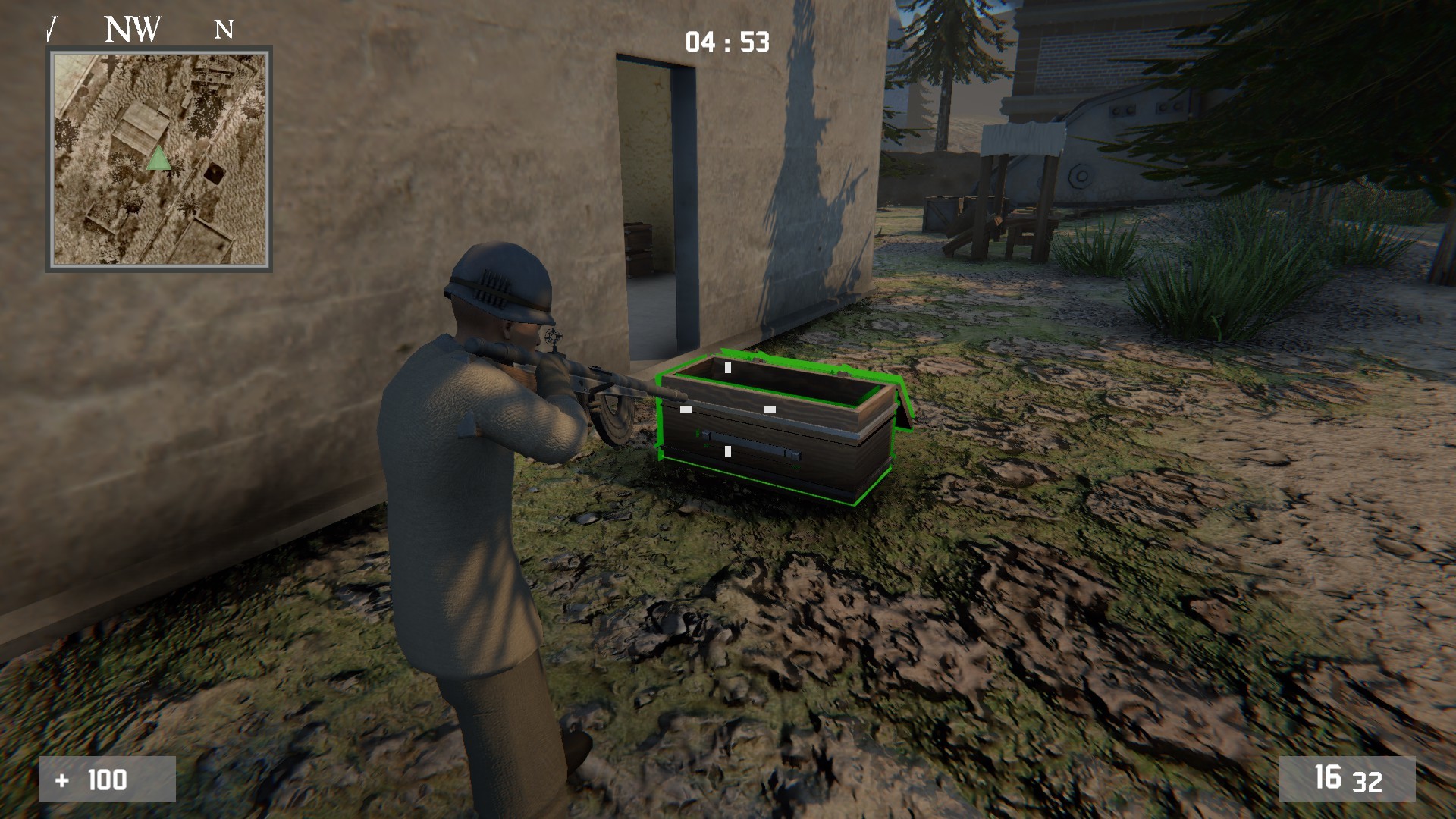 These are placed randomly and strategically around the map and are there to naturally provide the players with more ammo when they run out of bullets. Combat can be fast and brutal and munition stocks usually drop fast in the heat of battle. 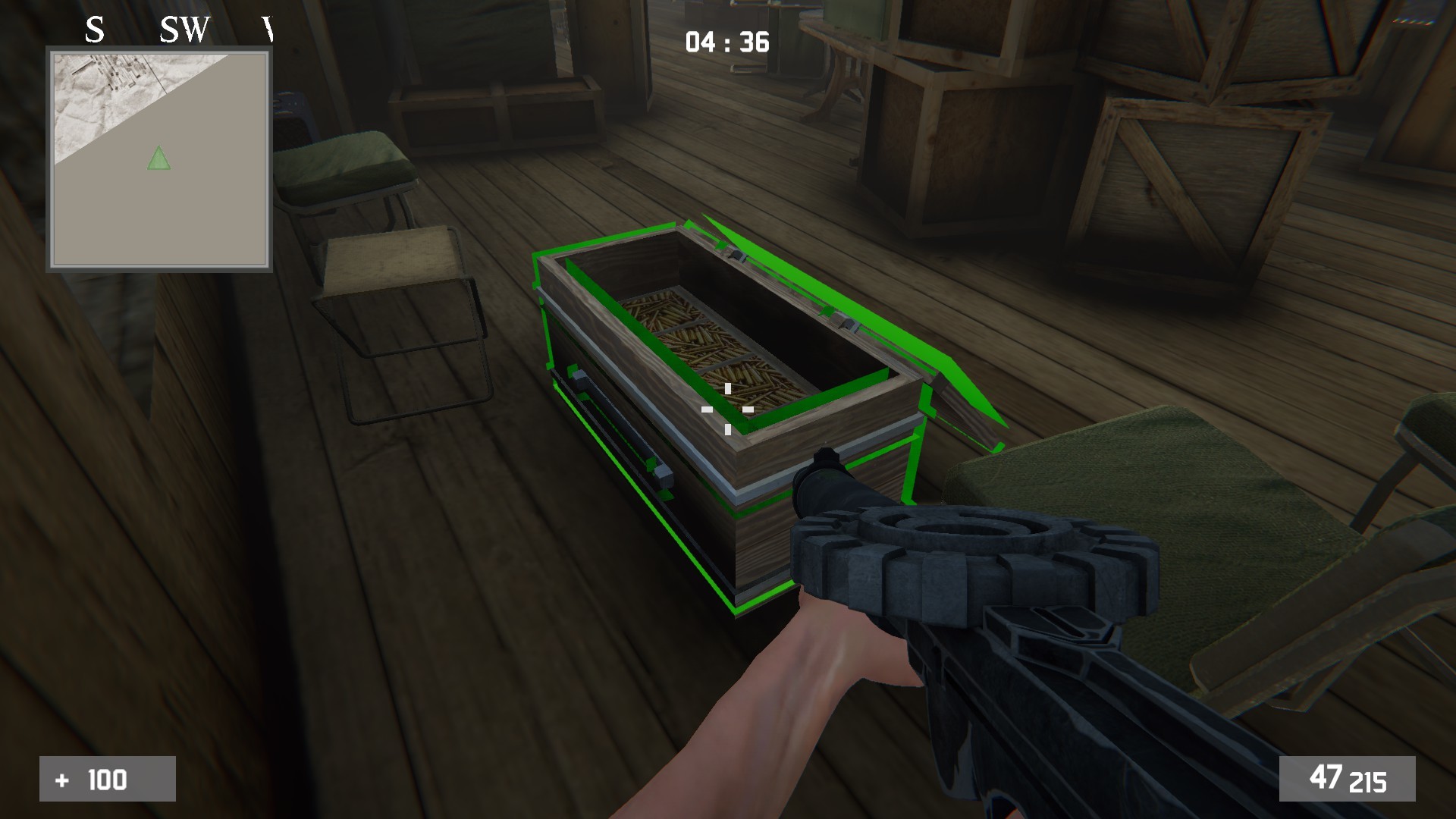 They are intractable by simply walking near them, they then add a certain amount of ammo to your gun's available munitions. 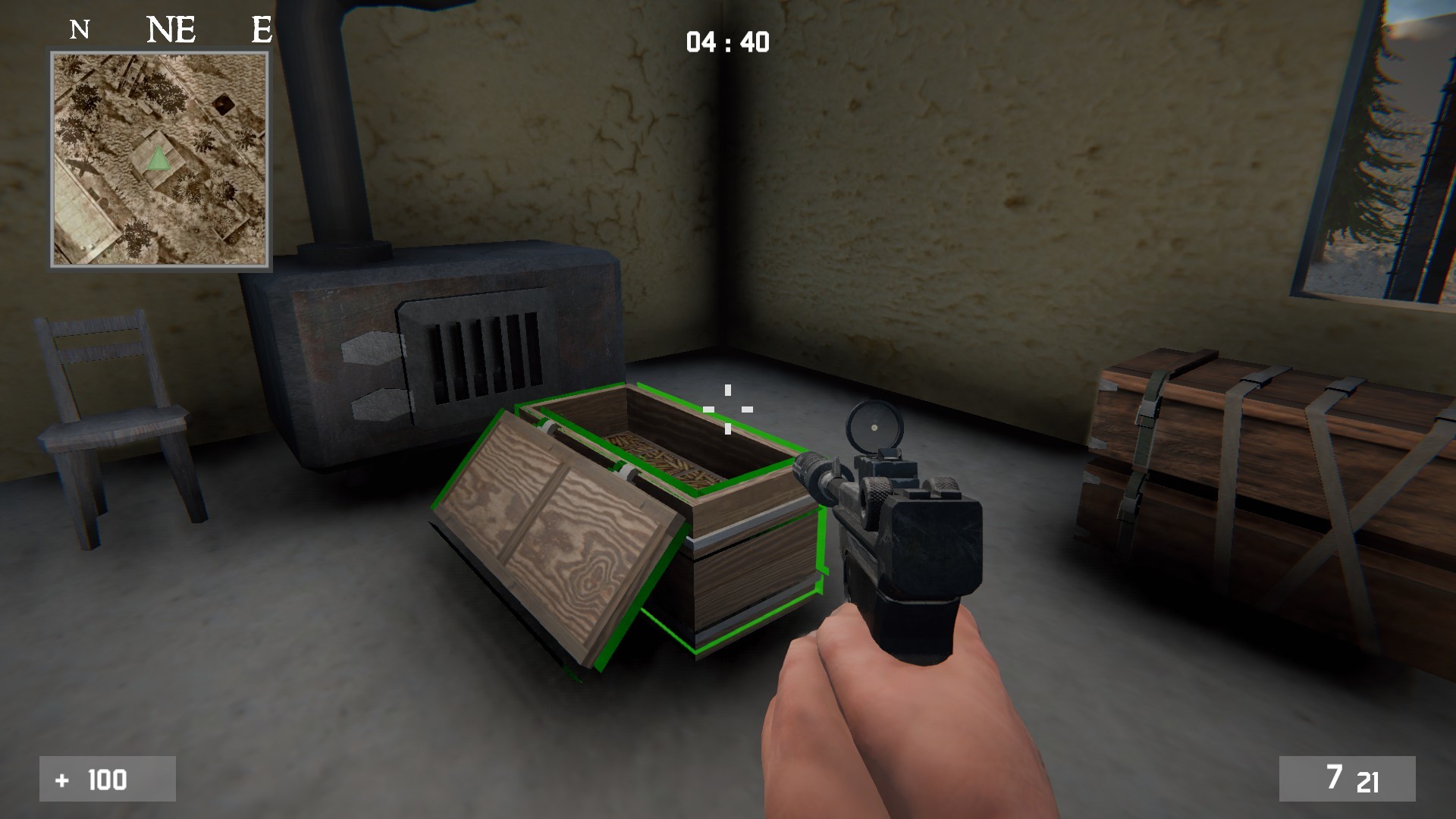 The stations are destroyed when depleted but re-spawn to the same location every 10 seconds once destroyed, ensuring the battle rages on!

This is the update for a new gun, the Lewis gun. 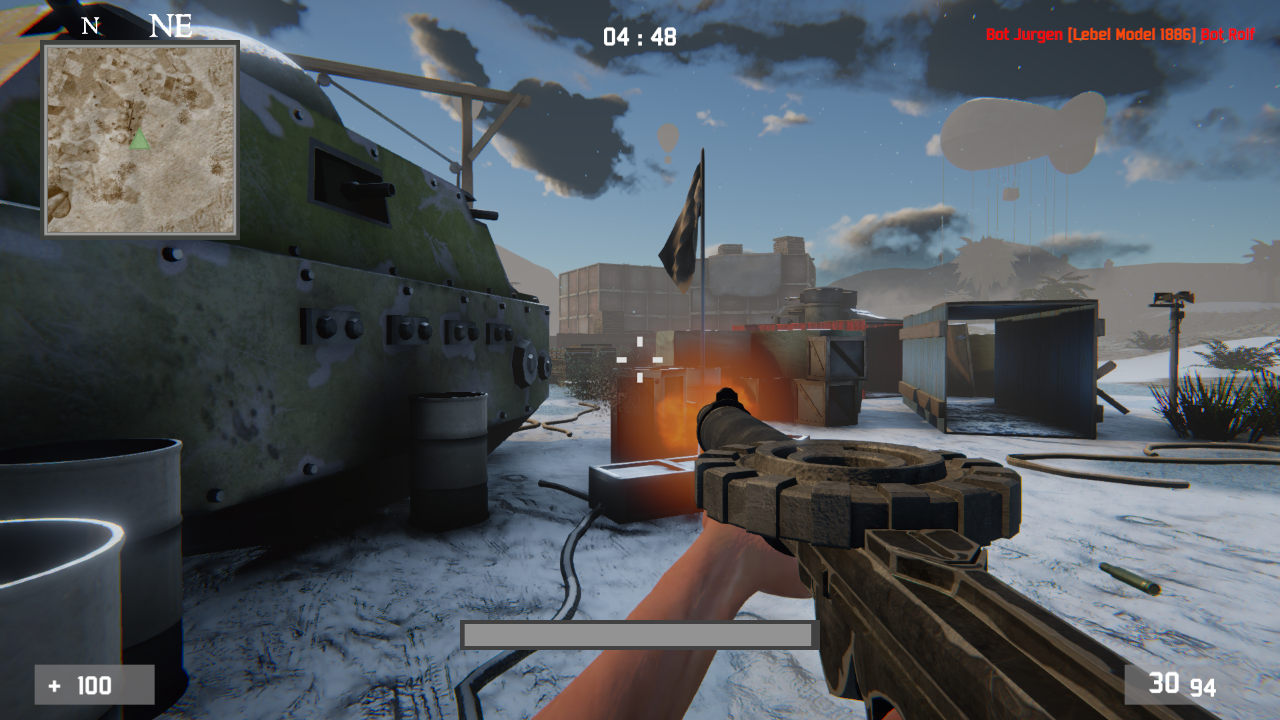 The Lewis gun is a classic in world war folklore and history, making it a must have for Grunt1914. The gun is of English origin and was mass produced in England during its early lifetime in 1914. 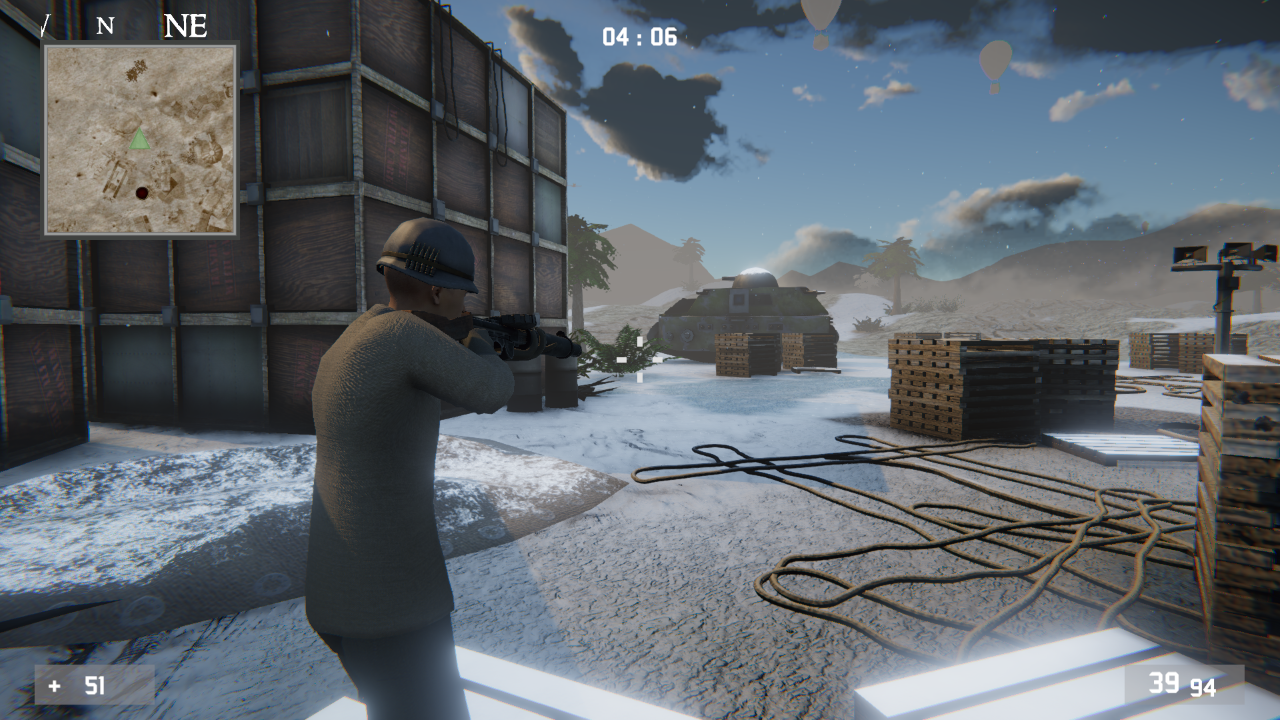 Using advanced cooling techniques the gun has a 47 round pan magazine. It has a incredible RPM of 600 in Grunt1914 and does allot of damage over a short period! 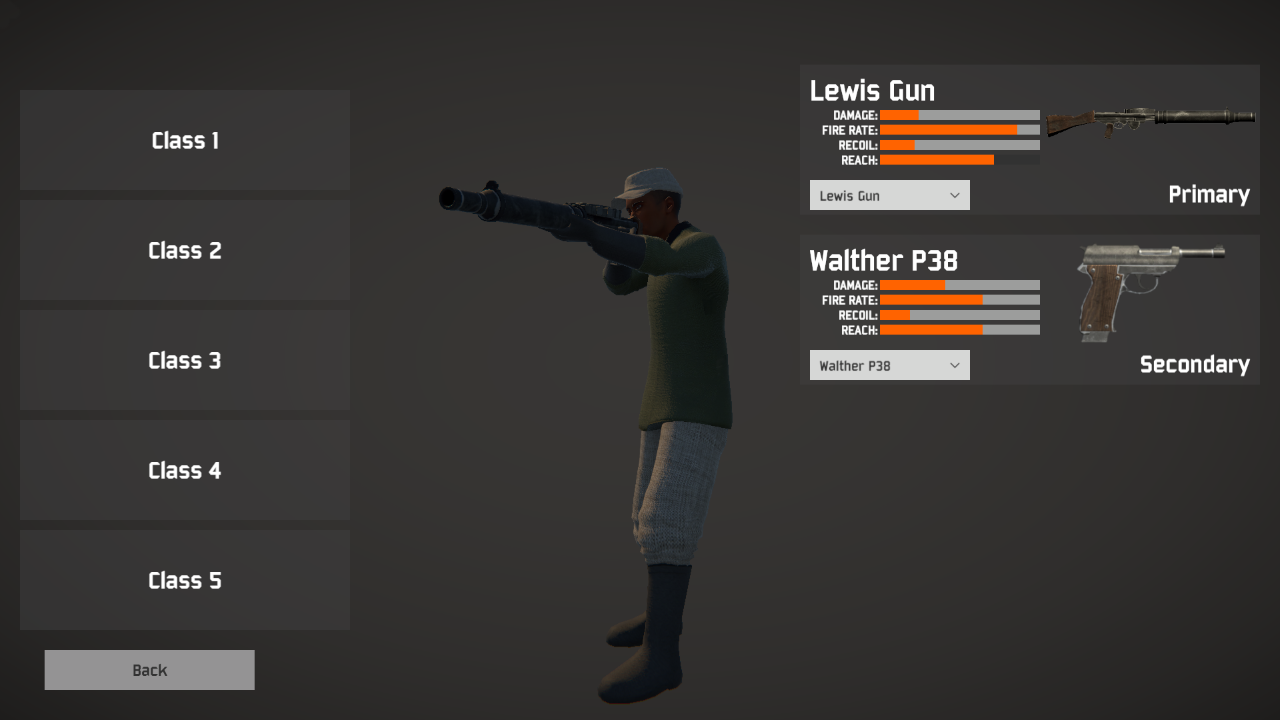 Using this new weapon you are sure to become the ultimate run and gun grunt out there on the battlefield! Heavy style!

This is the second update for a new map, called Express.

Express is by far the smallest map in the game and is suitable for very small team death-match games or as little as one on one death-match or gun-game rounds. Shotguns, sub-machine guns and pistols will work best here, with rifles and machine guns being too slow and heavy to really challenge on this map.

Express has a multitude of boxes, crates, props and other such miscellaneous items strewn about on a train. The entire map is on a underground troop and supply train, moving between battles. The train contains a storage cart, and three barracks carts to explore and fight on. Access to the cockpit is locked.

This map is only an interior and as such only has the clear weather option.

This map is quite experimental at this stage, and as of yet it is unclear how players will find the experience. As such the map is due to change in the coming weeks based on player feedback.

This is the first update for a new map, called Freight. 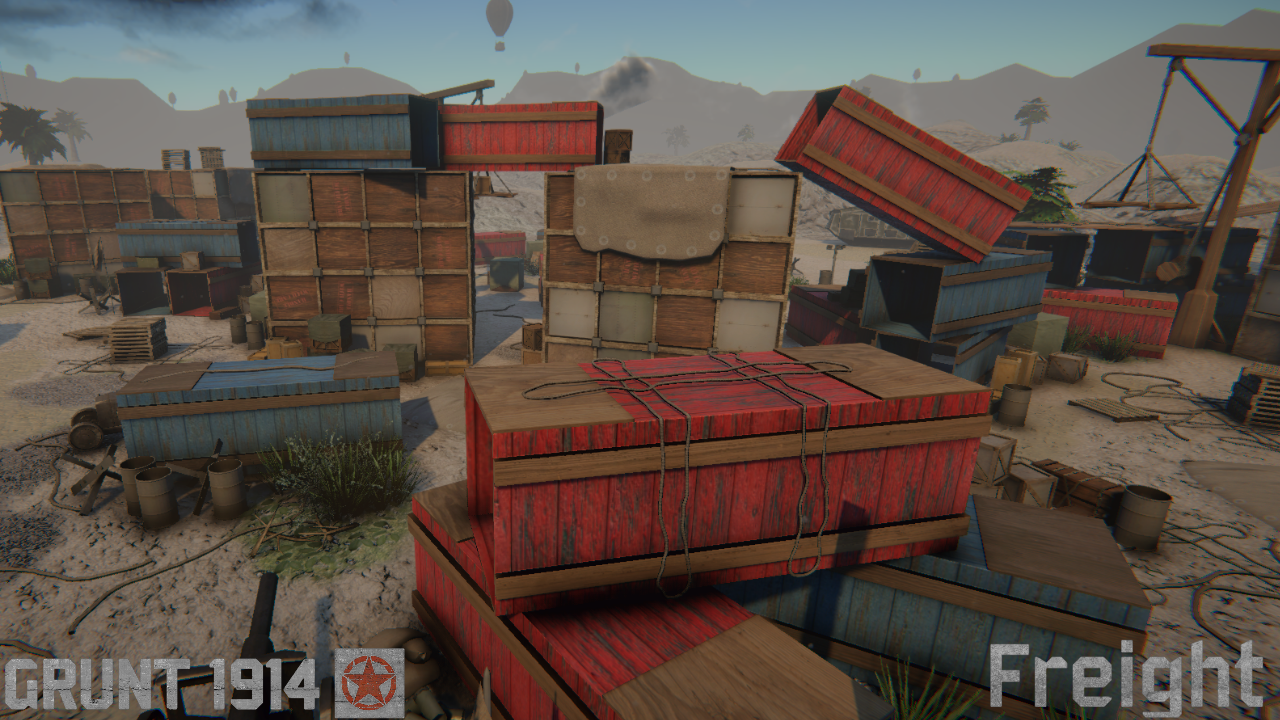 Freight is a smaller map than the rest of the maps in Grunt1914 and was designed specially for close quarters fighting. Shotguns, sub-machine guns and pistols will work best here, with rifles and machine guns having to take the back seat on this one. 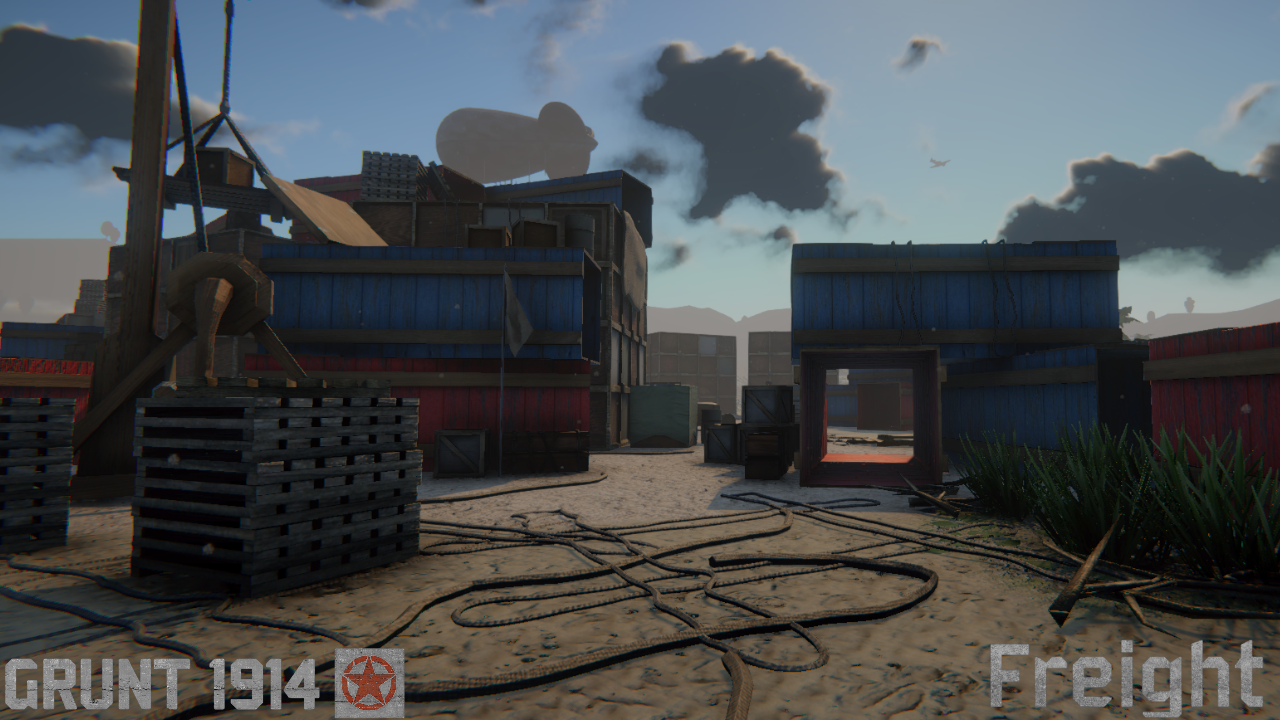 Freight has an assortment of crates, boxes, barrels and containers varying in sizes strewn about the area to provide cover for grunts in the heat of battle. The map is as the name suggests a stockpile of goods and weaponry stored away for the troops in the field. 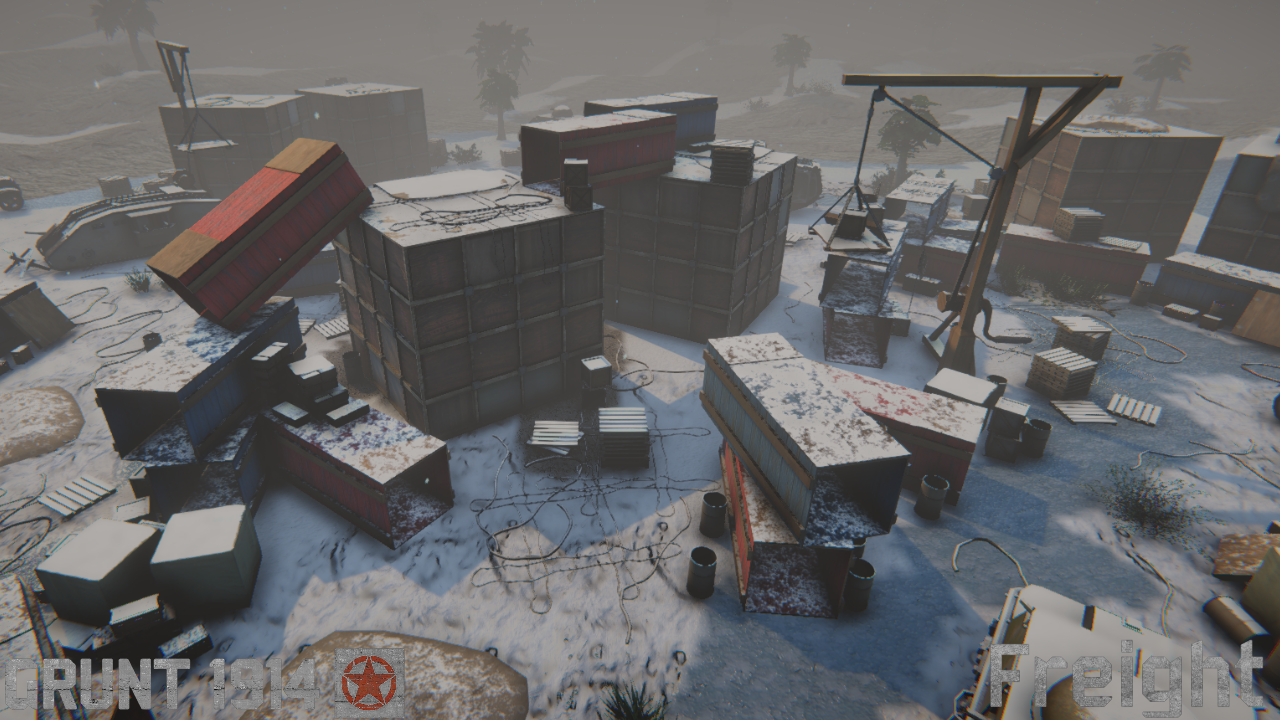 This update includes all the weather options for the map, with clear, rainy and snowy conditions available. 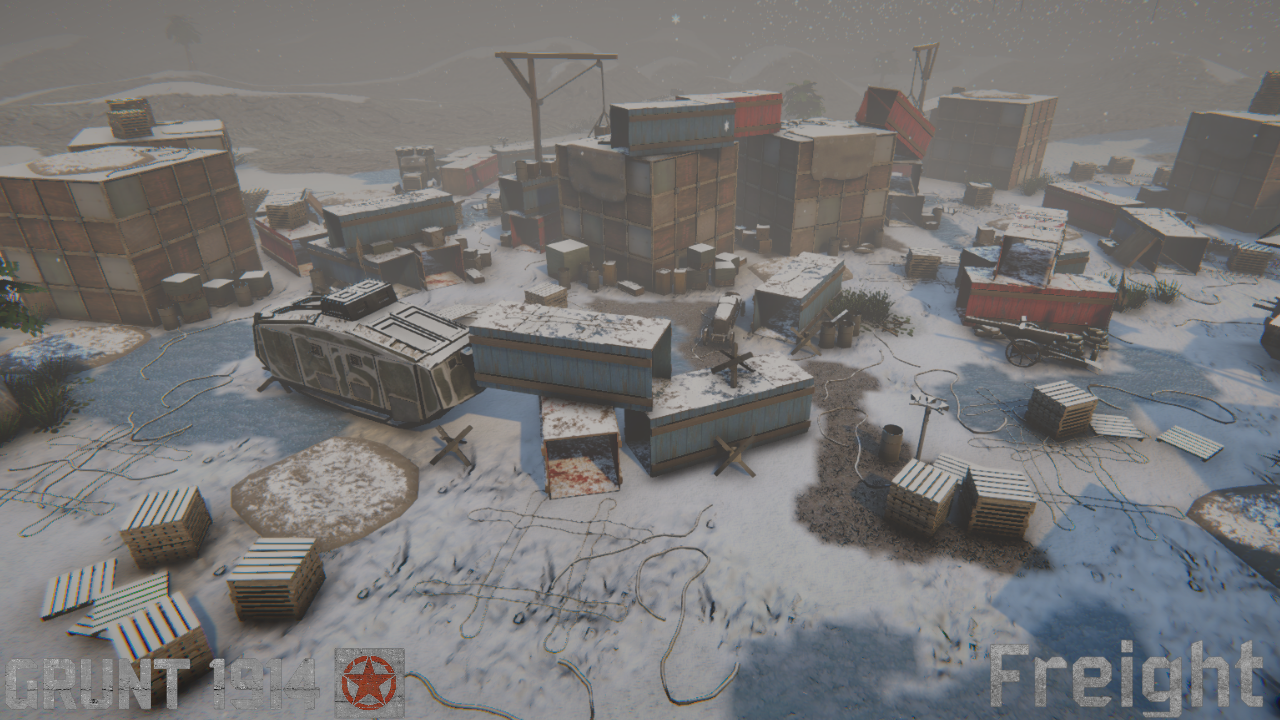 The map is due to change in the coming weeks based on player feedback. 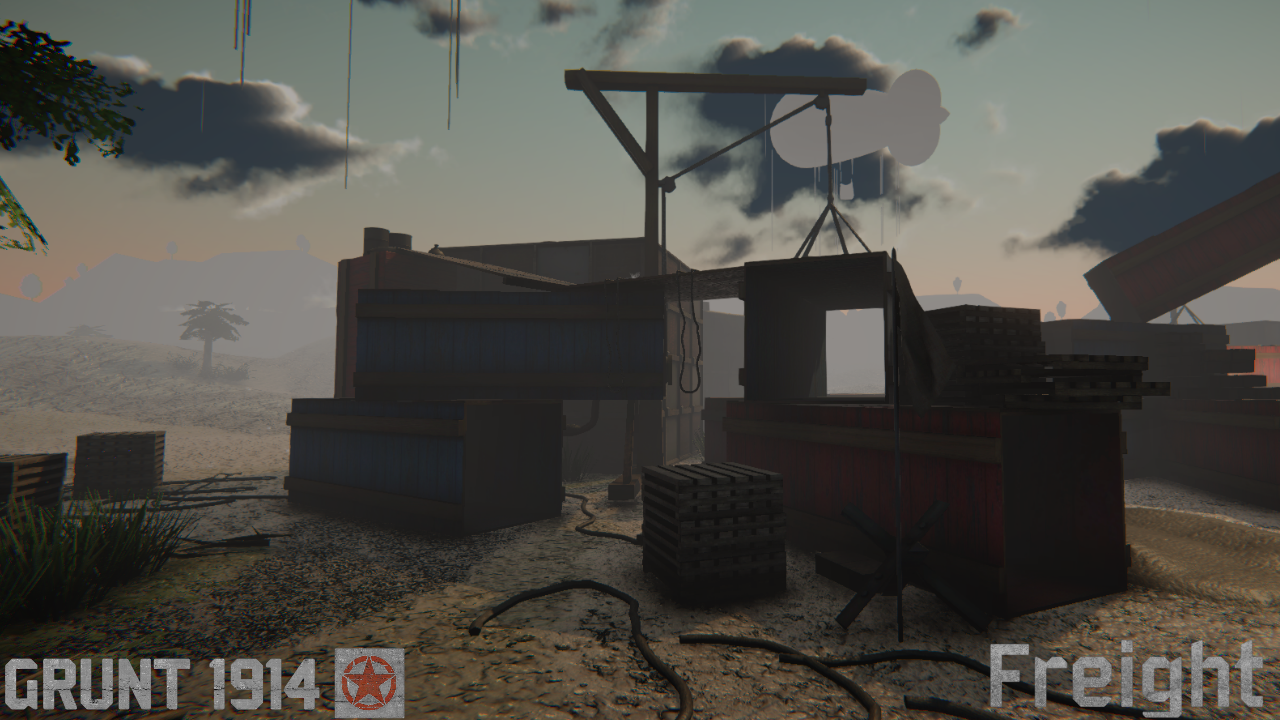 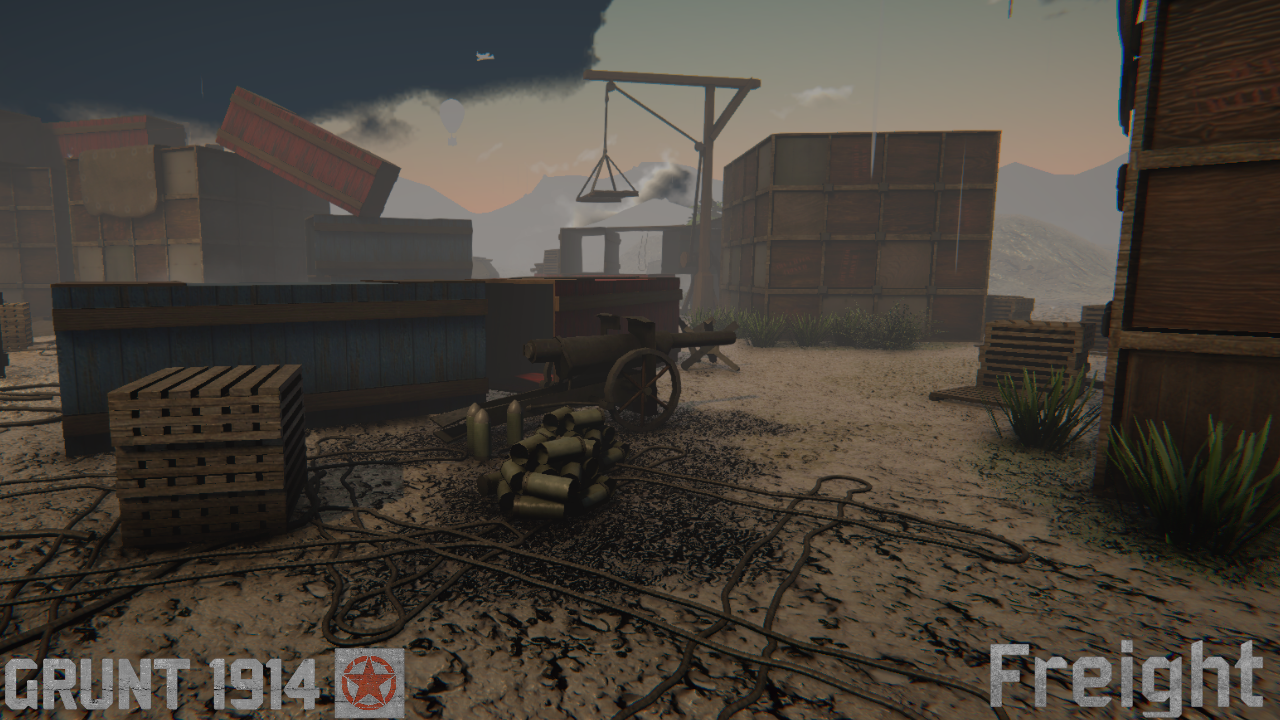 In this update the main menu and specifically hosting of matches is altered extensively. 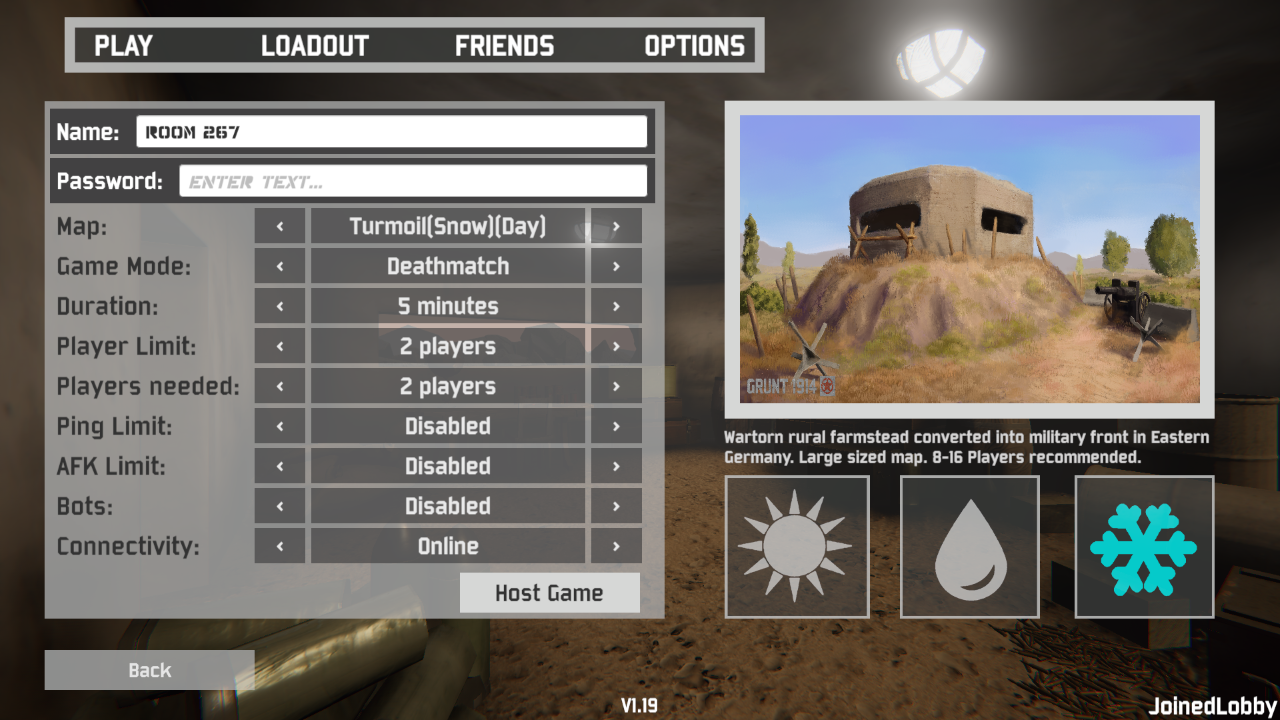 You can now see an image of the map when selecting it and there are icons indicating whether you are playing in clear, rainy or snowy conditions.

The login name is also now saved so that it isn't necessary to type it in every session. 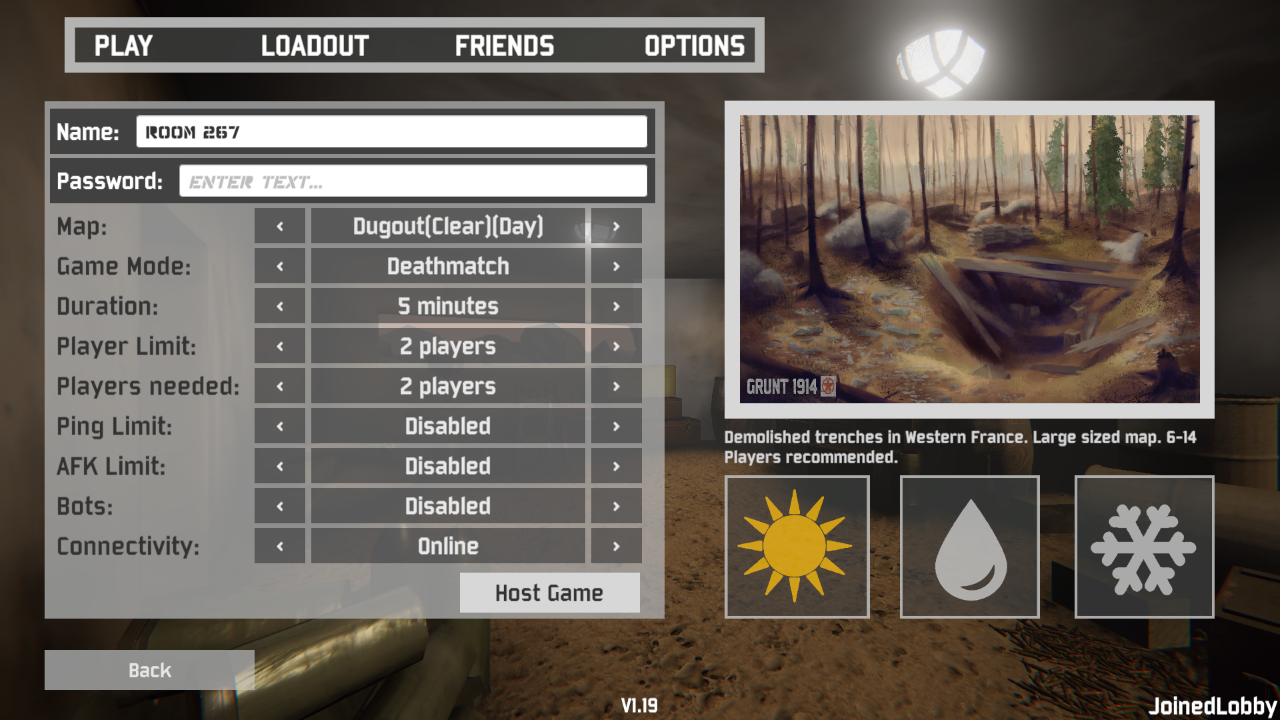 There was some confusion among users when selecting maps before, this update aims to eradicate that issue.

This feature is due to be altered further going forward.