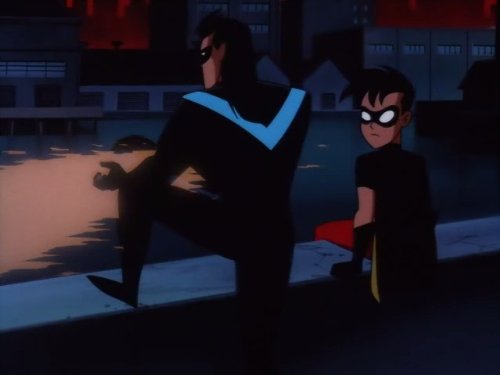 Dick Grayson reveals to his successor the secret of the strained relationships with his mentor and Barbara Gordon.
This is in my opinion the best episode thus far. Young Tim Drake (mini-Robin) has a row with Nightwing and claims he's "Just like Batman" and that they used to be the Dynamic Duo. So, Dick tells him why he drifted apart from Batman. Batman confronts a dude in front of his kid, for which Robin comes off the better one here.

However, the other reasons Robin decided to call it quits make him come of as an arrogant idiot. He is angry because he did not reveal to him the truth about Barbara, which he had no right to do so and he believes that he put her in danger, which is also not the case.

This episode is more about the characters and real emotion rather than a whole lot of action. Also, we finally get to see what happened to make Robing become Ightwing.

One reason I like this episode is because we get to see the original Robin again, with only some minor changes. I wish they would've brought the original Joker back as well, he was still revamped.