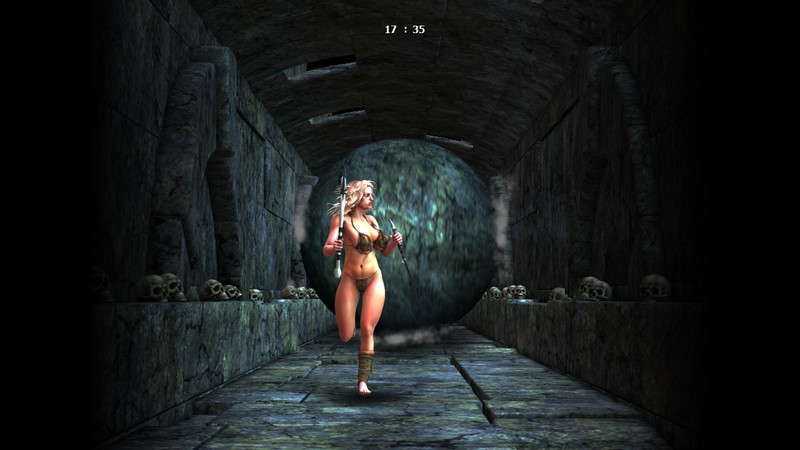 A non-stop action game, completely skill based. Immerse yourself into an incredible adventure in a world inspired by the 80s’ Sword & Sorcery fantasy. Frantic action, brutal fighting, monsters, romance, and plenty of Heavy Metal rhythms.

In a kingdom conquered by an evil sorcerer, a beautiful girl known for her prophesies as the Oracle predicts the coming of a savior, a Barbarian who will come from far away and break the chains of slavery.

◾ Six game characters: What are their destinies? It depends on you, as each character has unique abilities and special moves.

◾ Multiple endings: the endings depend not only on the chosen character, but also on the series of actions taken during the game.

◾ Gore, Blood and Guts: Massacre your enemies, chop them in pieces.

◾ Non-stop action: No breaks, you must always be on guard.

◾ Completely Skill Based: No RPG elements, everything is based on your reflexes and your abilities as a player.

◾ Versus Mode: Challenge anybody - your friend, your girlfriend, your relative - and find out who is the strongest. 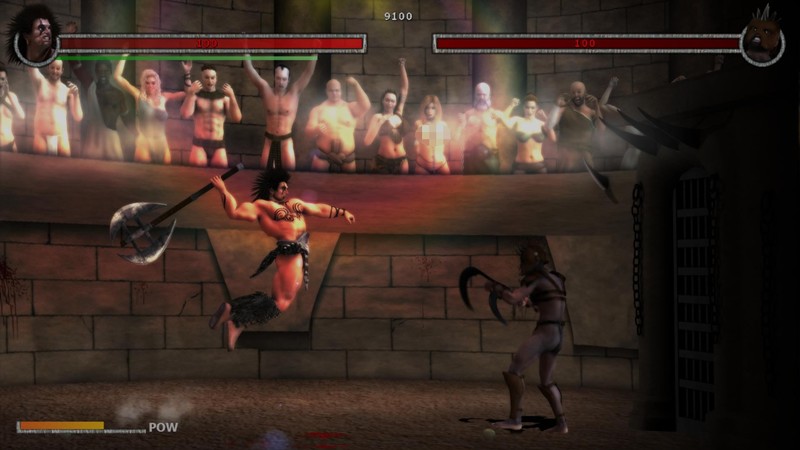 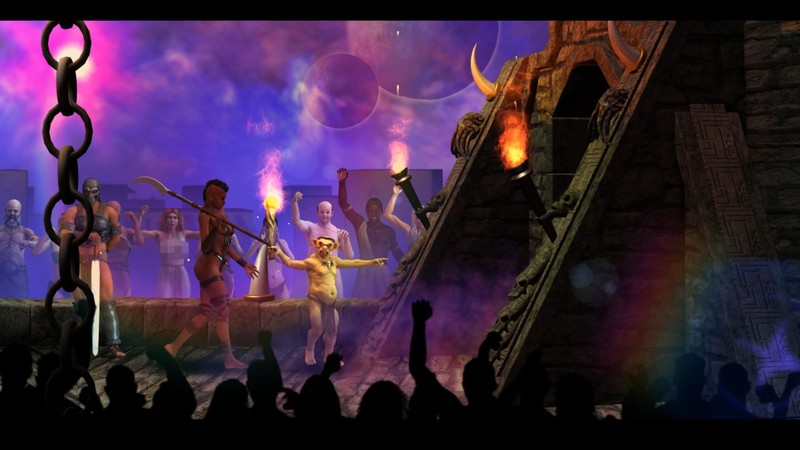 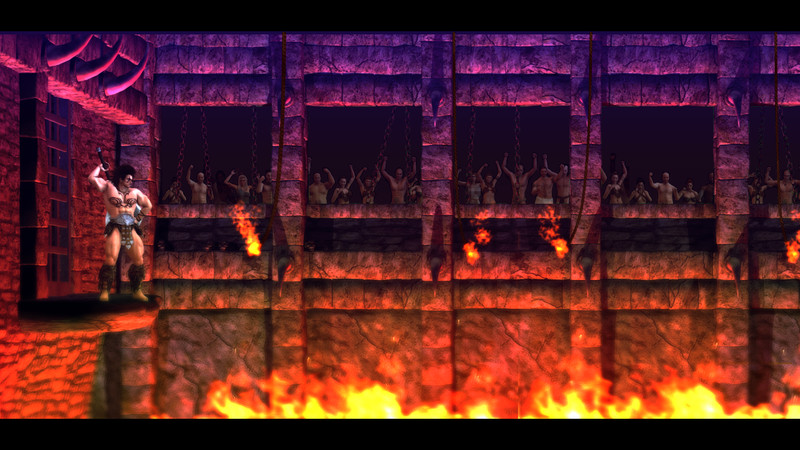 
This game lacks of the story, the map, and the context and the adventure sense of its predecessor. Some of the mini-games (like the Triceratops one) are so hard and ruins a good campaign with any character. I likes the idea to brings adult conent and sex scenes as a reward of a good running, but , the endings of almost all characters are censorerd or changed: we asks for adult content.. If there was ever an idea as badly executed as this one, it would've resulted in a the project's critical failure, followed by an investigation into the boon-dongle, then arrest and prosecution for all the parties involved.

On paper, the idea was to take the \u00bd-ar$ed 'fighting' system from Age of Barbarian<\/b><\/a> and put it into a tournament style fighting game \u2014 much like what Namco (now Namco-Bandai) did with Tekken's 'Force Mode'. But where Namco's attempt was partly successful, they knew to limit their 'story mode' to basic tournament fighting \u2014 exactly what Soul Calibur's 'Adventure Mode' allowed for, and what Arena: An Age of Barbarian Story<\/b> sadly does not.

Arena aAoBS (with emphasis on the 'BS') fails miserably in many respects, despite it having an interesting theme (like Weapon Lord<\/i>, incidentally also published by Namco in the heady days of the Super NES).

The controls are a bastardized version of the AoBEx mechanic (a sprint button replaces the jump button, since you're supposed to be able to 'jump' and 'duck' using just the joypad in a one on one tournament fighter style battle) in what is supposed to be a fast-paced fighting game (akin to the 'Dead or Alive' series). There is no dedicated guard button, but the parry mechanic is used to intercept incoming attacks. Similar to AoBEx, there are high and low attacks, requiring high and low parrying (although in AoBEx, most of the parrying is done against high attacks due to the large size of the bosses).

Arena's attention to detail will display the incoming enemy attacks as an upward red sigil or a lower red sigil, telegraphing your opponent's attacks so you can muster the correct parry stance. A successful parry will allow your character to counter-attack (although in practice, the enemy usually blocks your counter-move).

Aside from parrying, each character can also use the clumsy dodge-roll maneuver, which allows your fighter to 'switch-up' sides against the opponent, although this is chiefly for the battles where you fight more than one enemy (similar to that one battle in Data East's Hippodrome<\/i>). What's unfortunate about the dodge-roll is that it eats up your fighter's stamina meter, which also fuels your attacks. When your character runs out of stamina, they make one slow attack, then get stunned momentarily while they catch their breath \u2014 this easily opens you up to enemy attacks.

Arena also takes the 'Super\/Ultra' meter from CAPCOM's Streetfighter<\/i> series (and numerous SNK fighters) and allows for you to unleash a devastating ultimate attack against the enemy, once your bar is full. That of course, may not always save your bacon, since the game will also drop random power-ups into the fight (similar to the item containers in the Smash Bros.<\/i> series) which results in some awful RNG when your opponent, nearing death, suddenly regains a good portion of his lifebar to continue fighting you (and dragging out the time you need to defeat him). Similarly, the power-ups and explosives (which damage and kill you) stop dropping in the final few battles, but the bosses (esp. the final boss) will have exceptional maneuverability compared to your stodgy ground-based \/ can't-fly-like-a-wizard character. They will murder you easily even without the RNG power-ups.

Despite all of this attention to the fighting system, Arena's developers decided to introduce other elements into the game that have nothing to do with tournament fighting. In between bouts, there are these quasi-adventure segments reminiscent of the retro-style {Prince of Persia<\/i> death-trap ridden dungeons as well as newer mini-games similar to what one finds in Crash Bandicoot<\/i> or God of War<\/i>. Where you normally suffer loss of vitality in the fights, your character will instantly die in bloody giblets if you fail in the mini-game's endeavor.

That normally wouldn't be a problem (I've continued countless times in tournament fighting games), save for the fact that Arena aAoB imposes a 60 minute (more like 60 minutes and 10 seconds) timer on your session, forcing you to complete the game in that amount of time. While this normally wouldn't be a terrible condition, Arena's designers decided to dock you a full 10 minutes for each continue you use after the initial two times. It's akin to playing the original Prince of Persia<\/i> with time penalties being stacked on top of the time you waste on repeating the sequence or segment<\/b><\/i>, and for some players, this is pretty much the straw that breaks the camel's back.

Many of the detrimental traits of this game can be summed up by this user (Rah_Zen) in his post<\/a> critiquing the game, and I for one, heartily agree.

Aside from the time constraint the game imposes on you, the moves for all the characters appear to be the same (much like how Rahaan and Sheyna have the same \/ similar moves-set in AoBEx) with the chief difference in damage done, attack speed, and weapon reach, which basically leads to a fairly boring button mash-fest. Even the moves-set in Midway's original Mortal Kombat<\/i> are more complex than the moves in Arena.

And the simple button mashing approach that the game pleads you to take is at odds with the its expectations. In AoBEx, there was some measure of timing and counter-attacking the bosses (many whom instantly killed your hero); with Arena, the ever-present ticking timer (which incidentally, does not stop<\/i> for cut-scenes or non-action sequences) will pressure you into committing risky action, which usually results in losing more time after you die and are forced to continue almost ad infinitum<\/i>.

I've played lots of games \u2014 in fact, that was my job<\/i> for well over 12 years (and bought me my first house) \u2014 and I can see that Arena aAoBS has more bad issues than good. However, those bad issues appear to be unfulfilled germs of good ideas; the execution and implementation are at fault.

(+)<\/b> Interesting homage to the classic swords & sandal movies - there are references to Conan the Destroyer<\/i> (Bombaata and Zula), The Barbarians<\/i> (as enemies), and a few others (Red Sonja and Death Dealer are extra DLC).

(+)<\/b> Intriguing blend of action and adventure with the non-fighting segments between battles. More suited for an Age of Barbarian Extended Cut expansion, IMO.

(\u2014)<\/b> Strict time penalty. Stronger character who can do more damage will have more time to navigate the game's puzzles while weaker characters have almost no time to make any mistakes (fights take too long to win). My advice \u2014 double the timer to 120 minutes (the console port of Prince of Persia<\/i> had the 60 min. doubled to 120) or nix the timer penalty when continuing.

(\u2014)<\/b> Poor integration of the non-fighting sequences feeding on the same time used for battles. Include option to skip the non-fighting sequences from play. Players taking this option should be able to clear the game in 60 min or less (no time extension needed). Or stop the timer (from counting down) during battles (and esp. during cut-scenes where your character cannot move). My advice \u2014 Finishing enemies off grants additional time. Time extensions should also spawn in the battles, or when a player completes a non-fighting QTE\/puzzle segment.

Play Dungeons & Dragons: Rise of Warduke<\/i><\/b> on OpenBOR. It's free, and you won't regret it.. Game is quite hard to win. Also WTH is with the gameplay that if the opponent moves away, you get pulled, which you can't evade properly if there a two enemies with one near you, and many times I fell down the pit because of this.. I think it's a cool game, old-school and sexy and fun, but I support that more playable characters would be nice :)
Also, the controls are better than I expected.