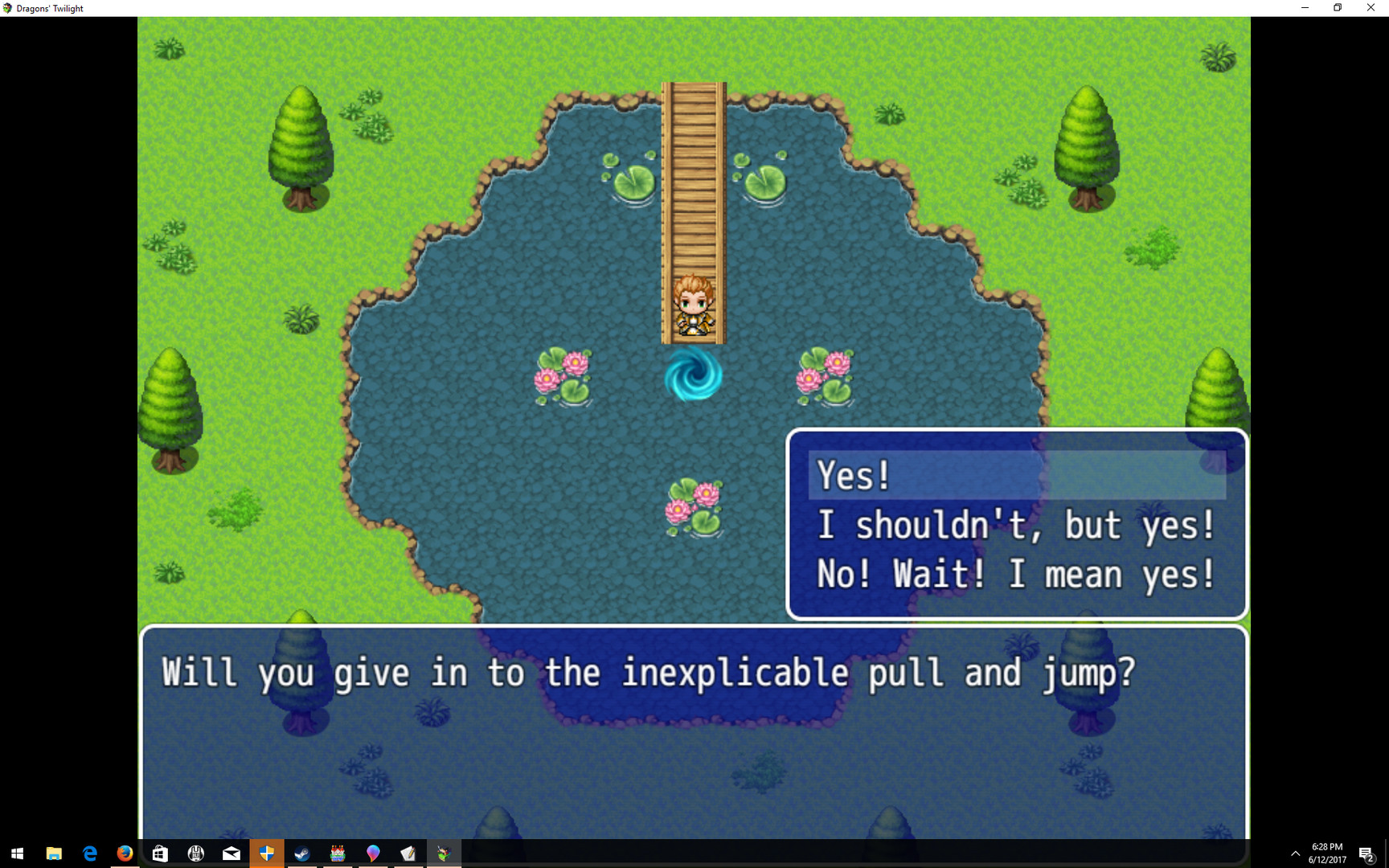 The world is in dire need of a hero…

Such a shame it’ll have to settle for less.

Follow Alvar, Landric, and Valerie as they
successfully fail their way to restoring a
fallen dragon to her former self in hopes
of stopping another dragon-god from
obliterating mankind. 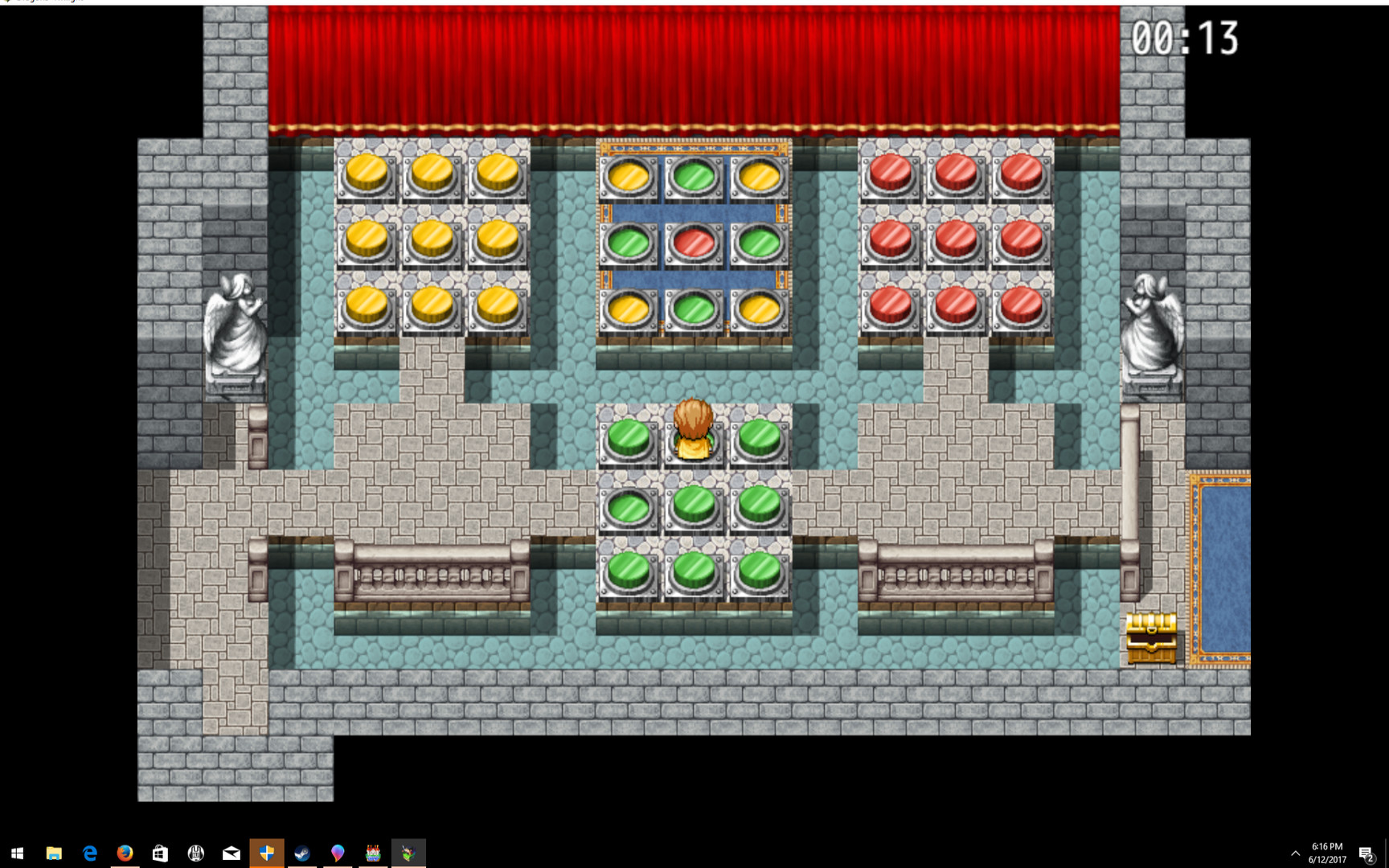 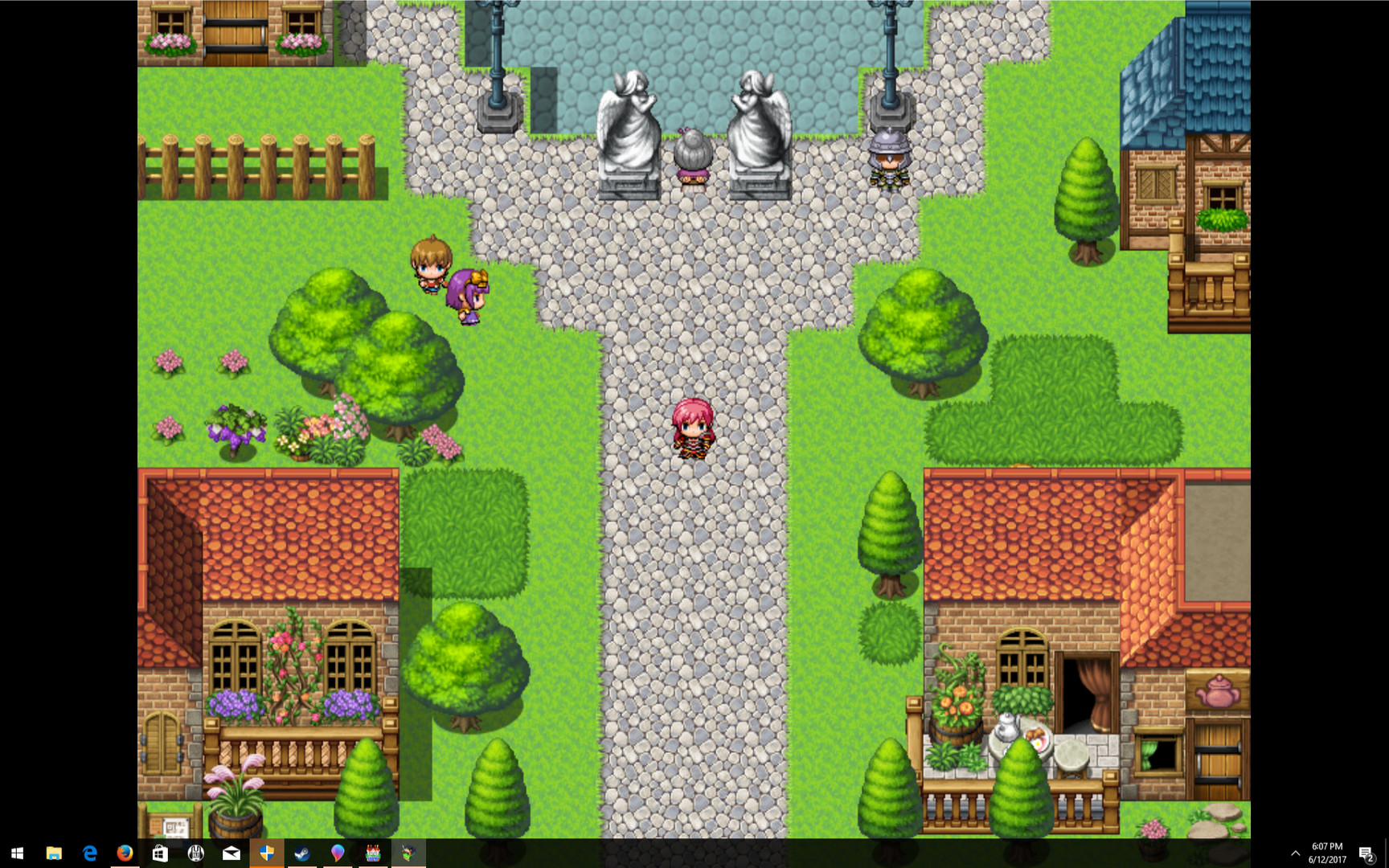 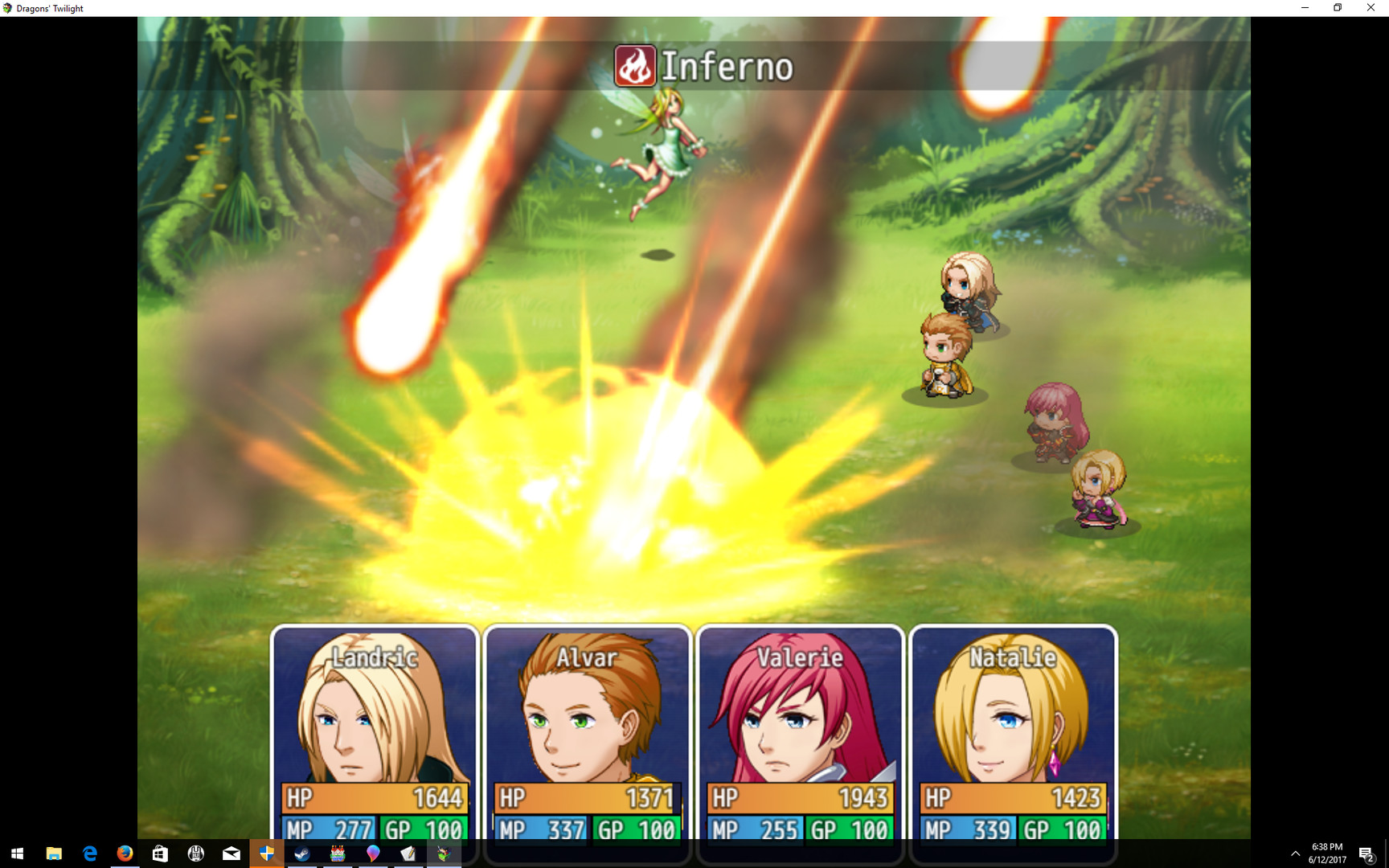 
enjoyed the game. a little short for me but overall pretty good. whens 2 coming out?. simple game, but better than I expected.. I WAS going to do an Einlanzer review first, but I guess I'll have to settle for this instead. What can i say about this game? This is RPGMaker, and it is fairly good, the music and dungeons are a bit repetitive, but this game feels a bit lackluster.

For some reason it feels like this is half a game, despite the story being relatively well written. My main reasoning for this is that I'm used to in RPGMaker games you to be around lv 50-70 when you reach the finale. In this game you are lv 30 if you do EVERYTHING. It feels short in that regard.

But I admit it was a good story, except for the final act which was kind of cliche. I will admit there were SEVERAL points before the finale that had me laughing at the seams, but the finale was a bit lackluster. But not a terrible game by any stretch of the mind.. I really enjoyed the game, and very reminscent of 90's RPG's, which I loved. It was very straightforward, overall easy to figure out controls, etc, and what puzzles were included weren't overly complex. Challenging but not frustrating. Even if you missed some weapons, armor or magic, winning battles and the end bosses was still possible. The few drawbacks in my opinion was that it was a bit heavy on the "gay" jokes at one point, there were regular but minor spelling errors throughout, and there weren't changes in visiting locations or dialogue after a major event that was supposed to prompt them.

Things I'd like to see added: 1) an accessible world map would have been great in going back to get special armor/weapons, etc. 2) Easier changing/selecting of gear/magic out of battle, 3) Ability to swap characters and gear/weapons/magic in battle.

The biggest problem I had was that after finishing the end battle, there wasn't an option to save that I saw. The game just restarted itself back on the game menu screen. I left a dialogue open with Argus and Eris, stepped away for a couple of minutes to check dinner and returned to the menu screen, with it asking me if I wanted to continue. When I clicked continue, it took me back to pre end-battle, which I would have to do all over again to learn the final scenes of the game. So, I won't go back to do that just for end dialogue and credits. That was a real shame.. Let me start by saying Dragon's Twilight isn't a bad game, it's just a matter of whether it's worth your time or not.

Let's get the obvious out of the way first; yes, default is everywhere in this game. I don't believe there's a single piece of custom anything anywhere. Animations, Sprites, Tiles, Icons. All default. And, while I will be the first one to say that defaults doesn't automatically equal a bad game, it does take a toll on the game for reasons I am about to get into.

Let's talk about what I liked first. Number 1: The Writing, mainly the humor. This game is hilarious and very witty and will have you chuckling a lot as you play. It was the main motivator for me to continue playing. Though, there are a large amount of spelling and grammatical errors throughout. Number 2: the Gear System. You see, skills don't work in this game like they do in so many others (Level-up, get new skills, repeat). In this game, all of your skills (for the most part) come from your equipment. This adds a new level of strategy when choosing what to equip your characters with at what times. While one piece of gear might just have better stats than another, it also might not come with the skills you'd like to use. It was very fun system to play around with. And finally, Number 3: Difficulty. This might seem basic, but a balanced difficulty is hard to achieve but this game did it for the most part, at least the way I played.

Now for the not so good. Number 1: The Story. While the story isn't necessarily bad, I just found it uninteresting. Dragons wanna kill stuff, one hero must stop them, that kinda thing we've all seen before and this game's story wasn't doing things too unique or different to really reel me in. To it's credit though, it doesn't take itself too seriously, which is good. Number 2: Here's the big one, the combat. Now, while the combat isn't "Spam Attack = Profit" and you will be using different commands and items to win, it just gets SOOOO BORING after a couple hours. You'll be fighting the same group of enemies again and again (I don't know about you but I prefer Quality over Qauntity, which this game does the opposite of), watching the same animations play out over and over against battlers we've all seen a trillion times before. This is REALLY where custom art could've helped a lot in spicing the game up and making the large amount of boring encounters far more interesting.

I should also mention the puzzles, which are a mixed bag. Some were fun to play around with (The Mine Cart one was my favorite) but others are annoying and don't help the sloggy-feeling this game brings.

To summarize, this game started to feel like a chore a few hours in and that's never a good thing. I do want to say though, that this series has potential. The addition of custom art and spicing up the encounters and combat a bit will go a long way for this series and, according to the author, that's what he plans on doing. So, I'm very interested to see what the developer will make now after getting some feedback. However, I found this title just too much of a slog to finish at this time.. I've played this game for a while and I absolutely love it. I bought it last year but sadly only have 13.6 hours. It's a really fun game and I can't wait to see what's next when I get back on! Would reccommend to anyone.. this is a great game except that there is not a lot of coin given for the extemination of enemies. the amount given does not seem to be in tally with those enemies. this makes it very difficult to amass enough to be able to purchase equipment which then seems to be an exorbant rate for said items. I realize that a lot of experience points does upgrade the team but having better equipment and coinage would be a better idea. the concept of the game is wonderful especially having other teams and then coming together. It lends more to the game. Another bug is the slow loading of the game in some places especially when doing the puzzles- by the time the game has reloaded to the next screen - too many seconds have been lost to do this puzzle . these are minor problems in the game but overall I would recommend it to gamers.


Dragons' Twilight II Progress Update:
Just wanted to let folks know that I have indeed been working on the next Dragons' Twilight game. I've taken your feedback and improved many systems as well as added much more playstyle customization, achievements, original art, cinematic/orchestration quality music, and more.

With a only a few hiccups, progress has been good so far. I expect a release to be between September and December 2019. So please hang in there a bit longer, and I'll be sure to drop another progress update as we get closer to launch.