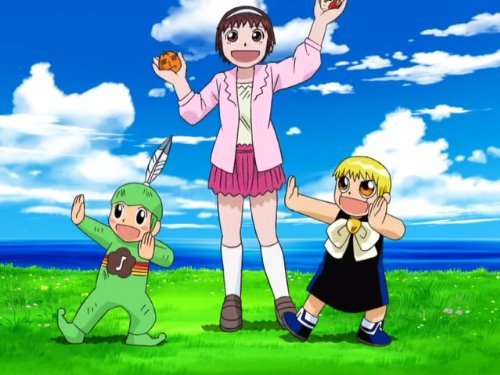 On a picnic at the beach with Suzy, Kiyo and Zatch are practicing the fourth spell when suddenly they hear someone singing a song in the distance. Approaching the voice, they find a little boy named Yopopo in a green outfit dancing to the song. When Zatch playfully starts imitating the dance, a girl named Djem appears. Though at first she assumes that Zatch is a mamodo and attacks him, seeing Kiyo makes her think she is mistaken, and she invites Kiyo and Zatch for lunch. As Djem begins spilling the story of the Battle of 100 Mamodos, she explains that her mamodo, Yopopo, with whom her relationship has soured, has the power to attract other mamodos with his song and dance. Meanwhile, Suzy notices that Yopopo has disappeared. Only Djem knows what it means; Yopopo has found a mamodo and has gone to fight alone... without his book of spells! Djem is furious but Kiyo and Zatch see that Yopopo wants to protect Djem...for it turns out that he is fighting the cold-hearted giant mamodo Kikuropu who hurt Djem's mother and grandfather! Encouraged by Kiyo and Zatch, Djem finally makes up her mind to fight! But even with Zatch and Yopopo battling together, they cannot match Kikuropu's power! Yopopo's book of spells catches fire...and Kiyo's passion to stamp out the fire and protect his new friends finally awakens the power to make the fourth spell work! The combination of the two powerful spells and Djem's musical spell succeeds in setting Kikuropu's book of spells ablaze! Meanwhile, as Yopopo is about to disappear, Djem apologizes to Yopopo for being so cold to him and tells him how much she really adores him. Yopopo finally smiles as he returns to the mamodo world....