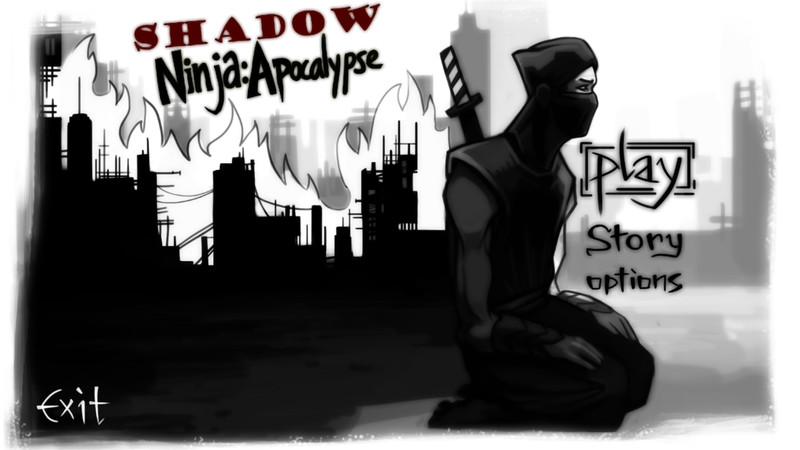 Evil mists have corrupted the people. Chaos is everywhere. Can you make it in time to the source of the chaos before everything gets consumed by evil?

On your way there will be many obstacles and rogue ninja's. Dodge these obstacles and get to the source of evil so that it can be stopped!

Prepare for a near impossible challenge in the world of Ninja's


Shadow Ninja: Apocalypse is a side-scrolling platform game in which the player takes control of the player character, Shadow Ninja, and guides him through 85 levels. A game over screen appears when a enemy or a trap kills you, however, the player may restart the level and continue playing. In each level you’ll be provided with weaponry (10x Sword or 20x Kunai) to defend yourself and you’re tasked with staying alive as long as possible. The graphics provide a mystery atmosphere and it makes the entire experience just delightful. The controls are pretty simple and easy to understand so you will have a no problem learning the ins and outs of this game.

1. Maintain ninja balance control.
2. Focus along with your movement, jump and attack.
3. Stay alert to the entire scene. Do not become so engrossed in watching only your ninja that you do not notice other enemy ninjas and deadly objects.
4. Use only your weapons if needed. Some enemy ninjas are harder to kill with Kunai, use your sword for stronger enemies.

Encyclopedia: Lists of weapons, tools and enemies in Game Ninja (忍者) were a type of warrior who specialized in unconventional warfare such as infiltration, sabotage and assassination during the age of the samurai. Another way of calling them is "shinobi", meaning "those who act in stealth". Ninja employed deception and forgery tactics to take opponents out by surprise. Due to their unorthodox methods which contradicted the way of the warrior (bushido), the ninja were not credited with the same honor as the samurai.

The diverse range of skills practiced by the ninja is called ninjutsu - the art of stealth - and includes training in armed combat, weapon techniques, military strategy, meteorology, geometry and breathing synthesis. Ninjutsu was passed down through generations within families or directly from teacher to a selected one or few disciples. This secrecy in part explains why little factual information exists about the ninja, giving rise to lots of stereotyping of them both within Japan and in the West.

Kunai (Used by you and enemy) The Kunai was a small dagger-type tool that served primarily as a utility knife. It’s secondary use was as a weapon, with a sharp point and short handle it was a great throwing weapon. It was also a great close combat weapon as it could be used in very tight situations.

Some other uses for the kunai include a climbing device, a hammering tool, a make-shift spear tip just to name a few.

Ninja Sword (Used by you) The ninja sword (ninja-to) was different than that of the samurai. The long sword that the samurai carried was made of high-carbon steel, and took months to have made. They were hand made specially for each samurai, taking great care to make a very high quality sword. It was so sharp that it could easily cut a man in two, even through their armor. The length of the samurai swords averaged around 26 1/2 to 37 inches.

The ninja sword was considerably shorter, only 24 inches, and the quality of the swords was much poorer. The reason for the poorer quality was the way they used the sword as opposed to the way the samurai used theirs. Samurai would swing their sword, severing limbs and slashing at the opponent. Ninja, on the other hand, used the sword more in a stabbing motion. To use the blade of the ninja sword effectively you would have to use a sawing motion when the blade came in contact with the opponents flesh.

Another reason for the poor quality of the swords is that since ninja were mostly mountain people and outlaws, they could not afford to hire expert sword smiths like the samurai could. Also their own sword smiths did not have access to the right resources to be able to make curved edge swords with well constructed blades. If a Ninja could overcome a samurai he would take his swords, simply because they are better.

Although the ninja sword was smaller and poorer quality, it still had its advantages. The scabbard for instance was made longer than the sword, about 3 to 4 inches longer. At the end of the scabbard there was a hidden compartment that was used to hide small weapons such as spikes, daggers or small amounts of poisons. Another use the sword had was that it could act as a small step by jamming the blade into the ground, the ninja could use the hand-guard as a step to get that extra height needed to scale a wall. Because the blade was not very sharp, the ninja could also use it as a hammer by holding onto the blade (carefully) and hitting with the handle. Also it was common to have the tip of the scabbard come off so it could be used as a snorkel. The Shuriken is the trade mark ninja weapon made famous by the movies and stories about the ninja. The shuriken was simply a flat piece of metal with sharpened points that were thrown at the enemy.

The shuriken was not originally designed as a killing weapon. It was mostly used to distract or deter so the ninja could escape. While in the midst of a get-away, the Shuriken could be thrown at the samurai chasing the ninja, possibly making the samurai think twice about continuing the chase.

Although the shuriken was not intended to kill, it was easily made lethal by dipping the edges in poison. This was effective, but sometimes it backfired when the ninja would accidentally cut himself while digging around for it, thus poisoning himself.

Shuriken were also designed to hit the opponent then bounce away out of sight. This way a ninja could fool an unsuspecting guard or sentry into believing he had been cut by an invisible swordsmen. The Kusari-gama is a combination of a sickle (short scythe) and a long chain with a weight attached to the end of it.

The sickle end was used in a slashing or stabbing motion, as well as used to block and hook opponents weapons. By holding the chain portion of the weapon, the sickle could be swung around to get a greater reach with it.

The chain portion of the weapon was most often used for trapping an enemy or their weapon. Once tangled up with the chain, the ninja could finish him off with the sickle. This was a weapon the ninja invented out of farming tools they used and easily available. A metal guard worn over the knuckles in fighting to increase the effect of blows. a wolf of a large variety found mainly in northern North America, with grey brindled fur. There were two types of bows used, the short bow and the long bow. They fired wooden arrows, often dipped in poison to make them even deadlier.

Kunoichi (female ninja) were often experts with the bow and arrow. a light fencing sword with a tapering, typically curved blade. a broad, slightly curved sword with the cutting edge on the convex side. a hand tool for cutting wood or other hard materials, typically with a long, thin serrated blade and operated using a backwards and forwards movement. Toxic gas having a similar density to air, it mixes easily when inhaled people in the city will acting crazy! b4d347fde0 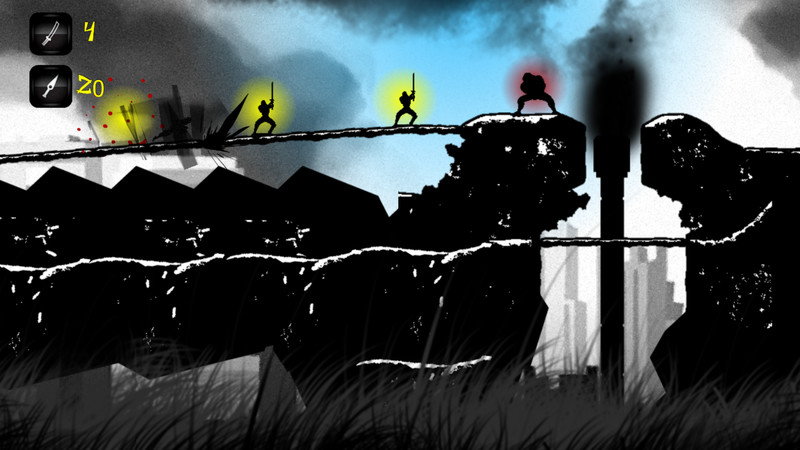 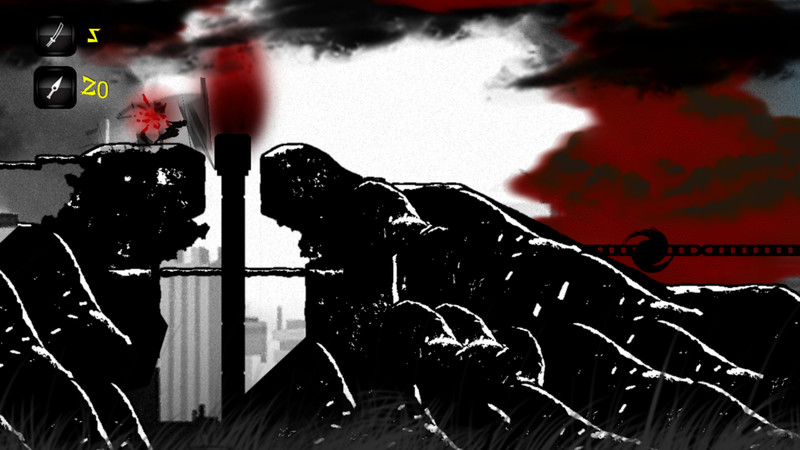 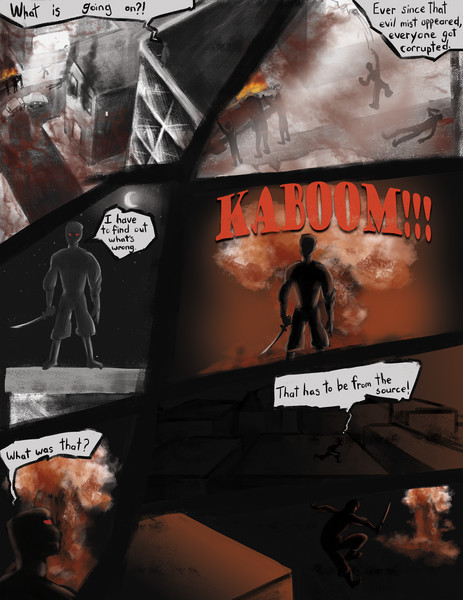 Shadow Ninja is bad. Have no delusions, it's like the love child of a tablet runner and a flash game.

It's a single button game where the player jumps over spinning disks, whirlpool disks, ninjas who pose, ninjas who menace, a dog and an explosive tower that kills you sometimes.

Despite only having one button the controls are still unresponsive with the character sometimes not jumping on downhill slopes. Left and right 'move' the player but I got all the way to level 31 without ever having to use those controls.

Actually the the left \/ right controls are basically broken with left accelerating the character towards the left of the screen - sometimes so enthusiastically that the stage starts scrolling backwards and the character falls off into nothingness. And right accelerating the player towards the center of the screen - generally causing the player to get hooked on something. Do not touch anything except the jump button.

There's very little in terms of graphics. The stages are black with the exception of the weirdly out of place and low resolution skyscrapers. Red clouds obscure blades, ninjas and the player. Jumping over something when you can not see yourself nor it is bad game design.

Black clouds also hide ninjas and blades against black backdrops. In the all stages I played the only real challenge was learning where the mostly hidden obstacles were.

There's no significant ramp in difficulty, once you've played the first few stages the others was just variants of tap-the-button. Stage 24 introduced a glimmer of fun because there was a genuinely tricky timed platform jump but that was it by the 30th stage nothing else had happened and the tedium had set in.

For a game with controller support it's shoddy - you can jump with the 'A' button but not restart the level. That requires a mouse click. Curiously the players death 'animation' kicks in only about one in every 8 deaths, usually you're immediately kicked back to the menu.

And the menu. There is no way to reset progress so if I ever wanted to go back to a previous stage I can't. The options menu is a picture saying you must play the game by jumping. There are no options. The story menu is a picture of some poorly laid out comic frames that cannot be exited. The only way to exit the story menu is to close the program.

Collision detection is atrocious. Huge bounding boxes around both the player and the obstacles will see you dying in mid-air time and time again. Particularly bad are the strange little kill-you-at-a-random distance towers and the explosions; some of which do not kill you at all.

Shadow Ninja feels like a half-finished student project that someone is asking money for. It's not worth it; even it were free it would still not be worth it. Steer clear - save your money.. I love runners. But definitely not this one. Unresponsive controls (mouse controls feels better somehow), lazy level design. Jump key often does not work, most of the obstacles are barely visible or not visible at all. Beat the game (50 levels) and didn't even feel that masochistic pleasure which often happens with such games. Also somehow lagging on a very good PC although almost not showing framerate drops in steam overlay. Also runs only in a window so technicaly support any monitor resolution but of course it's just a picture stretching. Very disappointing.. so bad this game. i actually used my money to get this