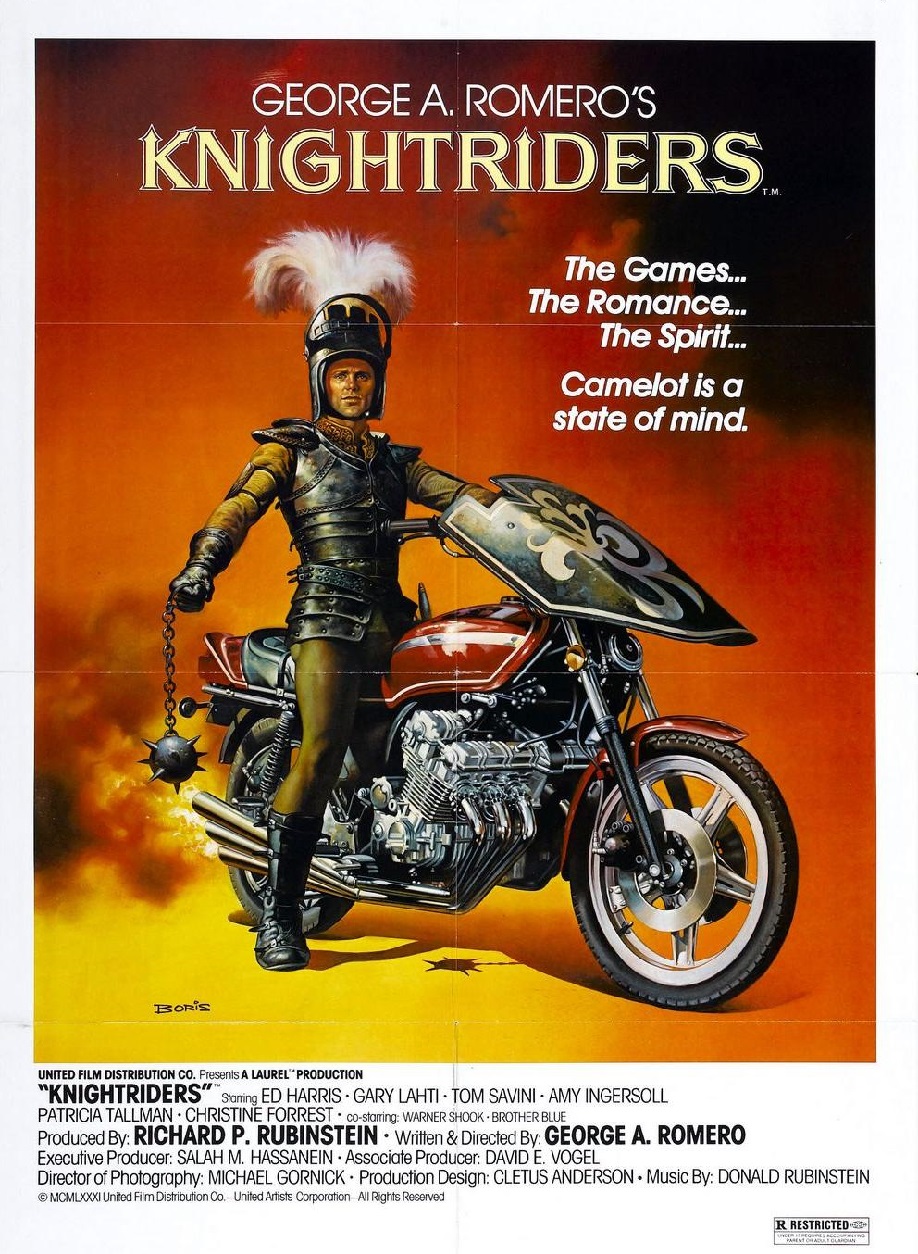 A medieval reenactment troupe find it increasingly difficult to keep their family-like group together, with pressure from local law enforcement, interest from entertainment agents and a growing sense of delusion from their leader.
A travelling troupe of jousters and performers are slowly cracking under the pressure of hick cops, financial troubles and their failure to live up to their own ideals. The group's leader, King Billy, is increasingly unable to maintain his warrior's rule while the Black Knight is being tempted away to LA and stardom, as they all have to ask why they were here in the first place.
A young Ed Harris is the first thing most people will notice about this movie. But look a little deeper, and you will find a beautiful little story about keeping your ideals amid a world corrupted by money. The Knightriders are a travelling fair of motorcycle jousters comprised of various marginalized characters, who live an idyllic existence outside of society. Tom Savini shines as the unscrupulous knight who falls prey to a greedy talent agent. However nothing is as simple as that. Some characters learn from their mistakes, while others do not. An earnest message about the evils of consumerism and the perils of following the herd that is still relevant in today's materialistic culture. Excellent performances abound from the varied cast. While there are plenty of gut-wrenching motorcycle stunts to keep everyone entertained. This is a film about innocence lost and found, with a bittersweet ending that propels the film into the realm of the mythic. One of George A Romero's finest.
OK, besides Ed Harris and Tom Savini, who else is in this amazing biker film from the early 80s? Well, it doesn't really matter because sometimes things just come together in a way that transcends what the likely original intent was, to patch together a biker movie about jousting knights who engage in feudal combat from motorcycles instead of horses. Yep. The costumes are a bit cheesy, the acting is a bit raw and amateurish and the story..., ah, the story: The story is the Arthurian tragedy of innocence, self sacrifice, honor and unfaithfulness. The tale works around the triad of the King, the very young Ed Harris, the villain, the wonderful Tom Savini and the knight protector, Lancelot, Gary Lahti. Each of these figures represents an archetype which very likely unbeknown to the film makers and they come through wonderfully in the way in which this tale is patched together. Billy,as the King Arthur prototype is idealistic, uncompromising loyal to his own mythology and like the legendary Arthur, ego-less. His loyal knight retainer, Alan, is Lancelot in his nobility and loyalty to his sovereign while coveting his wife all the time. Savini is purely delightful as the Modred counterpart, even taking Morgan le Fay's name as a pun. Morgan covets the crown and tries to usurp it by going off only to discover his new realm is a forest of paper tigers. The final scene and resolution of the tragedy works wonderfully, giving a the only glimpse of the famous story-teller and raconteur, Brother Blue as the wizard, Merlin.

As an anthropologist and mythologist, I saw this tale back in the early 80s and was impressed how the underlying mythology of an essentially low budget film held together in such a wonderful way in spite of a few flaws. I consider it a cult classic. Knightriders is overlong and at times fairly undramatic, but for viewers who stick with it and accept the premise, there is much of interest to be found here.