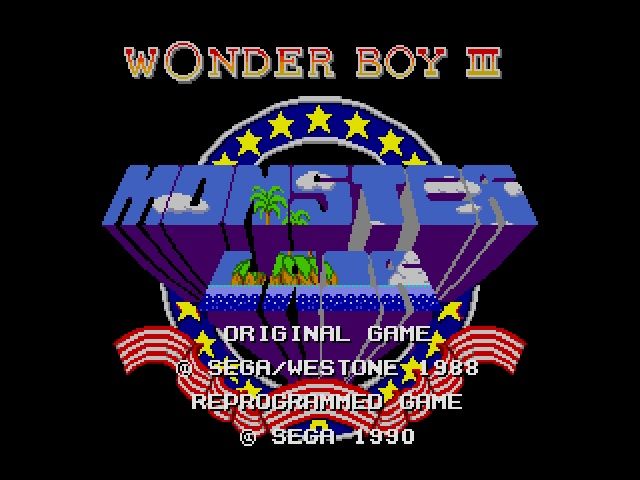 The monsters are attacking the quiet town of Xenobia.
Guide Leo and Priscilla to wipe out the monsters using the Legendary Weapons. 7ad7b8b382 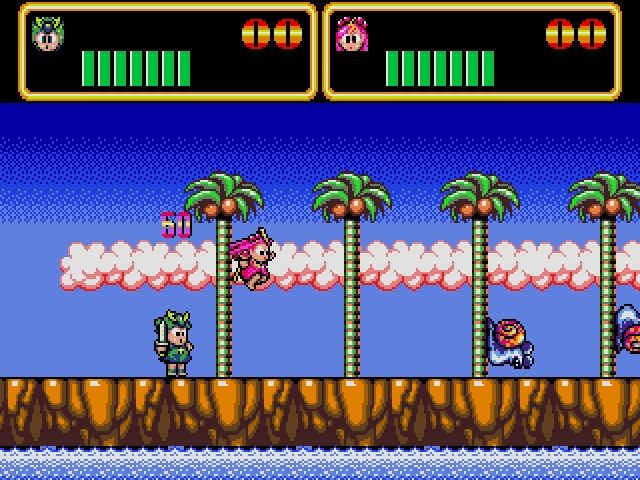 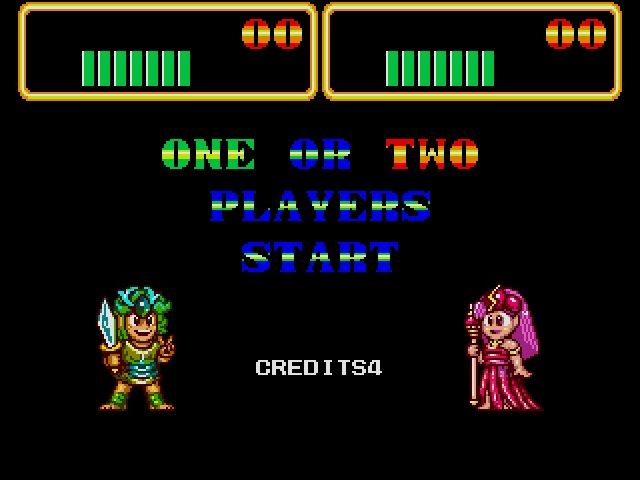 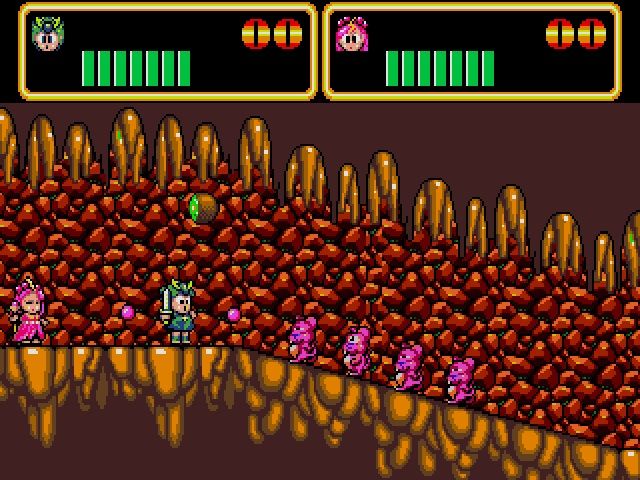 
This is fun to play. Upgrades every 4 seconds. It's like a space shooter but with mans instead... and jumping.. Wonder Boy III: Monster Lair is a mix between auto-scrolling platformer and shoot-em-up for up to 2 players. Or maybe just a bit of shmup. It was originally released in arcades in 1988, indeed was the third game by release date chronology and made by both Sega and Westone in some way or another. It's a bit confusing to be able to tell what Westone did and what was Sega's doing. Wonder Boy series are indeed confusing, seeing how Westone would own everything aside from trademark on name, supposedly, and even use it to make Adventure Islands. You should google out on it.
The arcade game would get ported both onto PC Engine CD as "Monster Lair" and Sega Mega Drive, which you are looking at, how rude. This one was supposedly "reprogrammed by Sega", released in 1991 on 4 Megabit ROM and never came to US for some reason, staying in Europe and Japan.

So no, it's not Wonder Boy 3: Dragon's Trap, it's not metroidvania either. Yep, numbering is a bit confusing there since that action-RPG game had number 3 in name as well. So if you want some RPG action look elsewhere, it's not here.

Since there is no US version, you might be wondering if they picked JP or EU version. Since EU versions are designed to run on those PAL system due to their TVs running at 50hz instead of 60hz and often then not the games gameplay speed would be unoptimized and thus slightly slower. While JAP versions have Japanese language, duh.
Well, the game uses same ROM for both regions, so there was no picking involved. Both emulators provided by Sega run it at 60hz, so it's pretty nice. And game had only English, no Japanese.

The game that you have here is nothing more than emulation of Sega Mega Drive version.


Now, technical part about Sega's emulation here:
The Sega Classic games that you purchase on Steam count as DLCs for "Sega Mega Drive & Genesis Classics" game that should appear in your library.
It has Bedroom HUB which is the one with many features yet lags for many and Simply Launcher which lacks Workshop and Online but at least it works just fine for everybody.
However, Simple Launcher has it's fair share of glitches as well. It can crash. And it does the second time you go to main menu, so always quit after saving there so it doesn't crash when you want to save next time!
Emulation itself, mostly sound, isn't that good but it does it's job. Also, yes, emulator supports quick saves.
As alternative, you can use external emulator to run games that you purchased. Sega kindly placed in all games that you purchased in "uncompressed ROMs" folder that program itself doesn't use, just change file extension to ".bin" or so. The file for this one being "MonsterLair_JUE.SGD".
I also demand you to read digital manual of this game first. You can find it here on store page or go to "manuals" folder of game root and open "03 WB3ML_PC_MG_EFIGS_US_v6.pdf".

Has online (in Bedroom HUB only) and local multiplayer.

There are huge slowdowns in 2 players mode, watch out! Use PAL\/EU setting\/region on external emulator.


So yep, what we have is a shoot-em-up - platformer mix with autoscrolling background, though you can speed it up by walking near the edge of a screen, which is a dat too close to the edge of a screen for my comfort. There are pits to jump over, platforms that can screw you up by falling down and enemies to defeat, who sometimes drop a weapon powerup, mostly when you defeat a whole line of common enemies. These powerups are very common, replacing your pea-shooter for a short amount of time, so you switch between them quickly. It actually makes me think of shumps for some reason. They all vary in their use, there are times when you will want certain ones. For example, rocket one that explodes when you release shoot button. Or what look like leaves that surround you, which you will want to avoid unless last level.
Oh yea, and you die immeditly if you contact with enemy. but not with projectiles, which just takes away a bit of your healthbar. Which also slowly loses over time as well, so you better grab all those fruits that appear around.
Also, you shoot fast only if you tap shoot button. Get ready your thumb. And protip: Hold up to hover in air.

Near the end of the stage your hero will enter inside the cave entrance that looks like dragon's head. Does that mean that you are now in Dragon Trap? Nope. Because it doesn't close after you, so it's technically not a Trap. Just a Monster Lair. In this part the game becomes pretty much a shump, as you can fly anywhere on the screen. You just have to survive few liens of enemies and then beat up the boss, which look rather nice and have nice ideas about them sometimes.

Yep, it's a game that doesn't have any strong unique element, but still feels like a thing of it's own. You are aware that the first Wonder Boy wasn't metroidvania either, right?

Mega Drive port was handled in rather, er, interesting way. First, a lot of sprites were redrawn to look more more cute-innocent. Or dorky.
But more importantly, the arcade original had 14 stages total. Mega Drive conversion? 9 stages. Yep, they dropped 5 of them. I guess it does make this an inferior version. But to be honest, I don't mind it, as all 14 stages would feel too long. After all it's an arcade game with limited lives that you have to beat in one sitting. And on default setting I found it hard enough that I would feel stressed\/exhausted by the end. And difficulty is a bit uneven through the game, like desert level seemed to be the hardest.
But then again, it's the kind of game that gets easier the more you learn it. For example, finding out that desert level is easier to beat if you shoot less, as enemies in that level throw beach balls at you if they get hit.
Also, beach balls, wat.

Graphics look quite colorful and are jolly, even if there is nothing impressive. The music is also quite good and memoriable.
Though a thing that I noticed is how similar it sounds to unlicensed (bootlegs) games that came out for Sega Mega Drive. Seriously, did those bootleggers steal the sound engine from here? That, or maybe it's a shared drum sound sample that offputs me.

There are some options included in this game. There is usual sound test. You can change continues amount to either 4 or 6. Lives count between 3 and 5. And you can change difficulty, which actually impacts a whole variety of things. I noticed some enemies were removed on Beginner or some wouldn't shoot projectiles. Futhermore, the health of enemies and bosses changes around. Advanced actually makes it so any common enemy requires at least two normal shots, which might be an overkill, seeing how you can be swarmed sometimes. Recommended more for 2 player mode.

Oh yep, there is 2 player coop on same screen. There is no friendly fire and players don't collide with each other. Curiously enough, characters can stand on top of each other. I guess it can be of some use rarely.
Sadly, game falls with it's head down in 2 players mode. As soon as two players shoot the huuuuuge slowdowns immeditly comes in. It's extremely unstable speed and not much fun.
However, if you play on external emulator, I recommend you to switch to PAL\/EU system. As said, they ran at 50hz. Which means that they have to render 10 less frames or so per second, as far as I am aware, might be wrong. And while game wasn't optimized for PAL system so gameplay speed is slightly slower, by around 16%, it doesn't slowdown as much in 2 player mode and thus you actually get faster and more stable game.