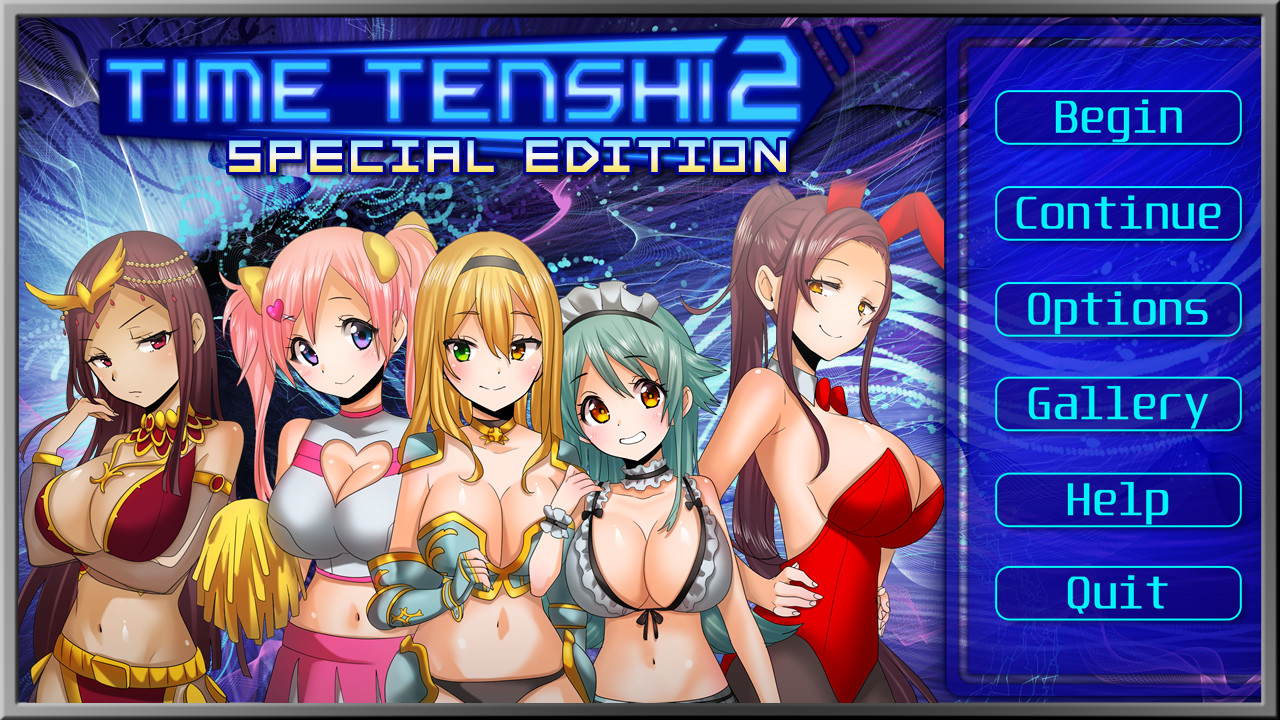 THE GIRLS OF TIME TRAVEL...


Join Rose, Kyo, Tessa and Michelle - the Time Tenshi (Time Angels) - as you enter the amazing world of time travel, made possible by the work of Tensai Shiro, the genius inventor behind the Time Window: mankind's first functioning time machine!

Who will you romance?

Your decisions in choices throughout the story will influence which girls you can accompany in any of the in-depth unlockable scenarios, covering everything from visiting new locations in history... to going on a date!
Think carefully how you answer each choice to gain positive Affinity Points for that girl!

Playing as Kenji, the grandson of Tensai who finds himself surrounded by beautiful, busty time-travelling girls wearing incredible Time Suits, you'll help to save existence itself from a dire future peril!


All of us at Silver Cow Studio have worked really hard to bring you a high quality production, and we're confident you'll really enjoy this Special Edition of Time Tenshi 2!

How far can the limits of time be stretched?

What dangers does the future hold?

And is the mysterious, ancient force... truly unstoppable? 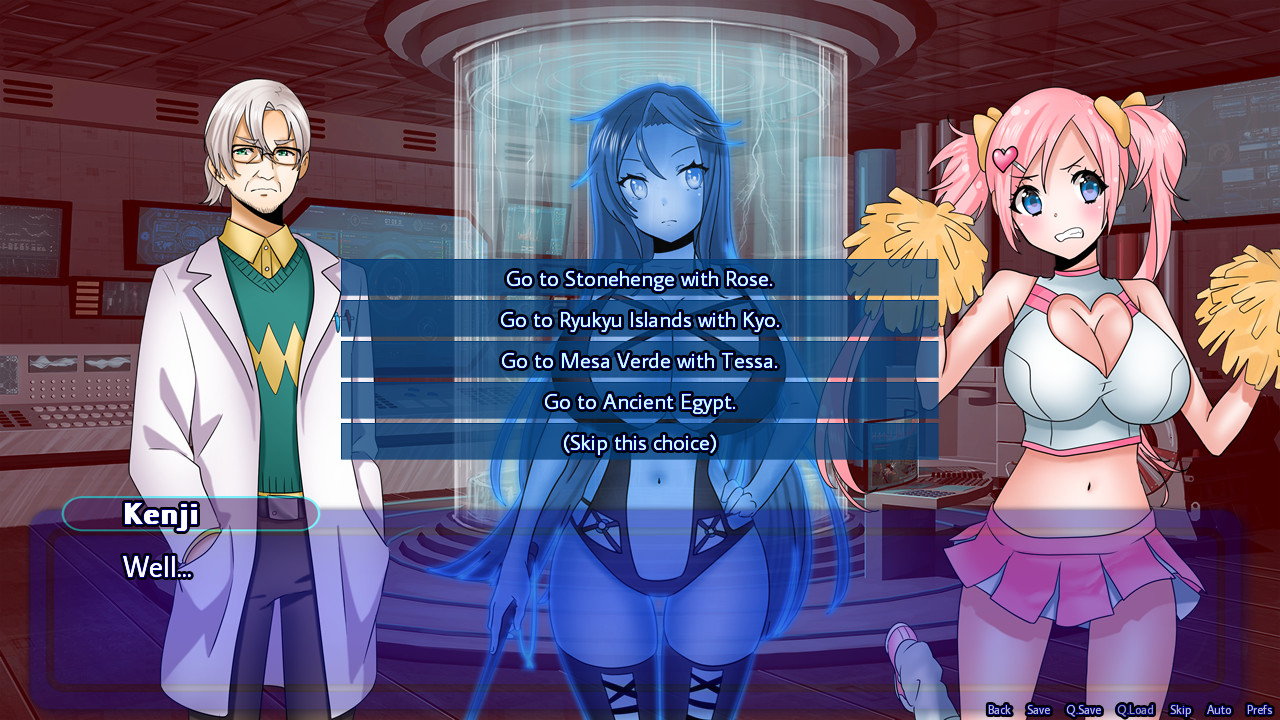 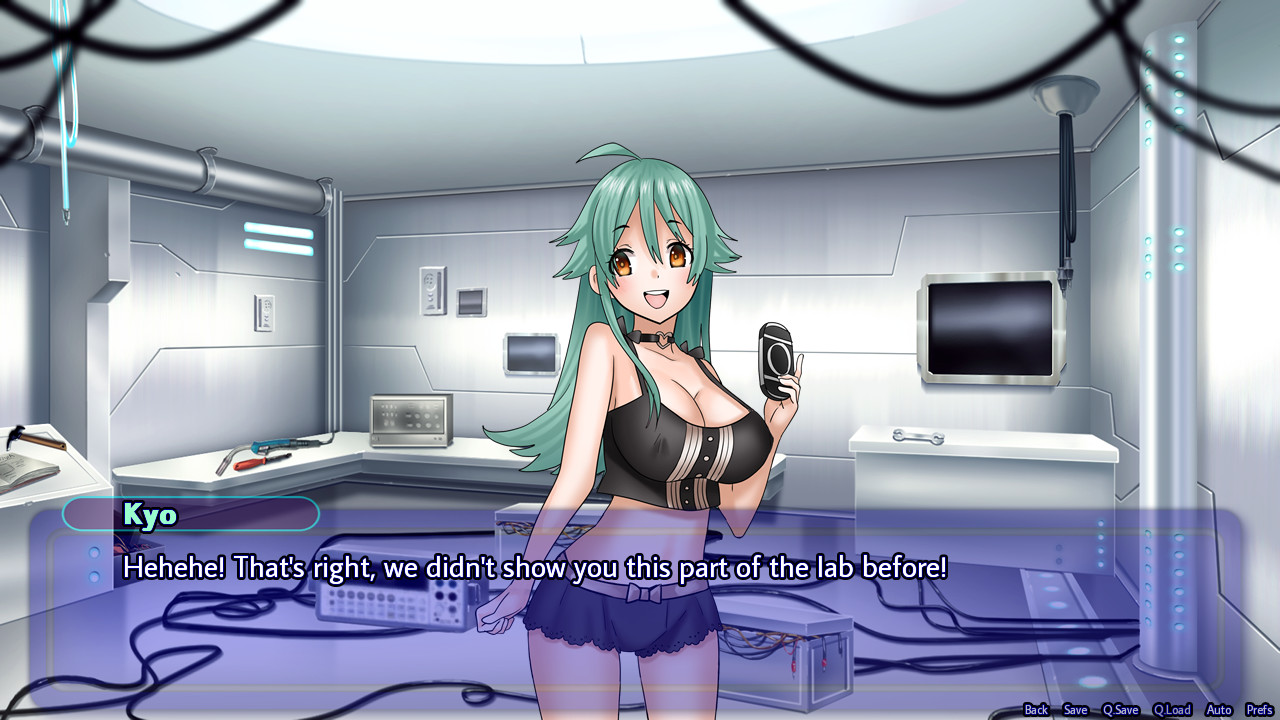 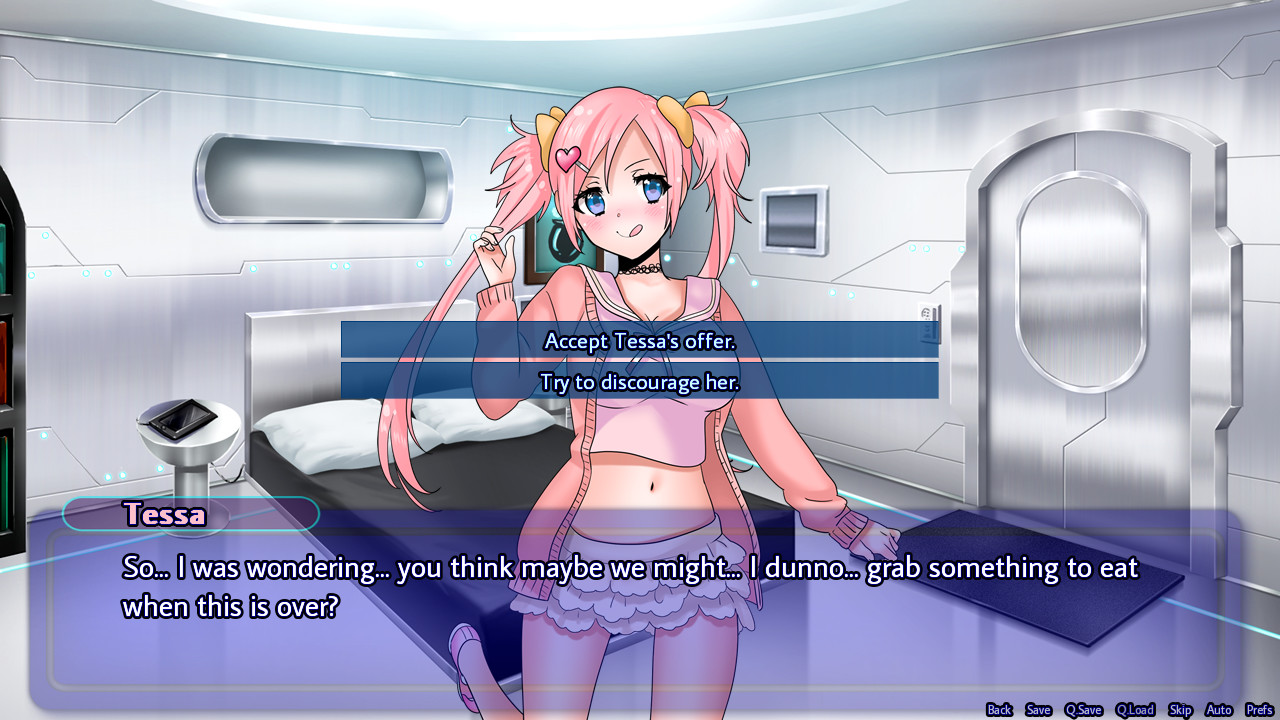 Okay, realtalk for a second? Boobs aside, I love this game, it was a really, really good visual novel and I enjoyed that it had lots of choices presented to the player so this time around I felt more in control of what was taking place in the story (though to be fair, I did test some choices and they play out the same way regardless, but with different effects down the line of the differing girls opinions of you).

I liked that this game was much, MUCH longer than the first one, I think I was only a quarter of the way through it when I started to worry it was going to end, about half way through it I was surprised it HADN'T ended, and for the rest of the time I was so enthralled by the story that I forgot to give a sh*t about how long the game was, which is exactly how a game like this should make me feel, I hate it when a visual novel feels like a drag. Before you think it, no, just because there are overly voluptuous women in this game doesn't mean i'm giving it a free pass, there are plenty of other visual novels out there with the exact same thing but that are unspeakably boring and feel like you're reading a text book rather than experiencing some fantastical adventure.

This game manages to hold the player's attention well by alternating between the current plot, the protagonist's personal struggle and memories, the last game's plot, the protagonist's relationship with the girls he works with, and all of this sprinkled with explanations by any of the given characters, namely the Protagonist's Grandfather, Tensai. Tensai serves as a nice anchor to keep the player grounded in that 'reality' still exists within the fantasy aspect of the game, giving it a better sense of believability, especially when they start spouting legit scientific lingo that, 98% of the time actually makes enough sense that it gets your brain humming about the legitimacy of what they just proposed, in reference to aspects of real-life science, which is fun, and again serves as a reminder that the game's universe isn't something derived exclusively from fantasy; it's easy to say "The Quildiderino causes a Fliogiggy affect which prevents our Wavavik from functioning" and leave it at that, no explanation needed, the player has no way of calling into question what any of that means, and what's more it totally isolates the player from having any sense of relation to the protagonist or story at hand.

Okay, i'm getting a bit off track, here's the TL;DR.

- The Player is given many chances to make a choice which either impacts directly how the story will play out, or the player's relationship with any of the given "romanceable" girls in the story.

- The writing is surprisingly good, if sometimes repetative (looking at you, Tessa).

- The art is very well done, though I think it could have done with more variety in terms of expressions available.

- The protagonist is likeable, and not a complete (key word "complete") numbnuts like most other protagonists.

- The plot is pretty godamned rad, and really gets you thinking if you allow it to.

- The Boobs. They do something. For one thing, yes it's attractive, but for another, they don't act like their size doesn't have real-life properties, as in, the girls actually make mention of the fact that they hurt their back and shoulders orrr that they can negatively affect their center of gravity when trying to fight. #justgirlthingsnoseriouslyifeelforyouguyspleasedontthrowoutyourbacksrealwomen

- There's an actual sense of conflict between Tensai (the Protag's Grandfather) and Tensai's assistant, Michelle (formerly a hero-turned-villain-turned-hero from the first game) and the distrust Tensai has for Michelle, as well as the two's vehement disagreement as to whether their actions will negatively or positively affect time as a whole, if at all, gives a feeling of weight and impending repercussions for one or the other's actions.

- The game feels long, but it isn't a drag to play. It mastered the hard-to-master feeling that most games can't give me, especially Visual Novels. The feeling of loving the game, and wanting it to last, feeling like the game is about to end because it feels like you've progressed really far, forgetting about worrying whether the game is about to end, and enjoying it to the last second.

- As said, there could have been a better variety of art, but more specifically a greater range of expressions for the respective girl's default art (as in, the most common art you see in all the screenshots when they're engaged in dialogue), 'cuz some of the expressions the girls wore during certain situations seemed pretty out of place.

- There are some parts that are a BIT weird, like, weirder than just some ballooning bazongas. Kinda' bordering on fetishy in terms of physical growth.

- Despite the wide variety of choices, I do wish that they felt more chunky. In other words, my particular path I chose, and the girl I decided to romance, it didn't feel assss... Climactic, no pun intended. It felt like the girl I chose wasn't given the same priority as the more obvious cast of girls that you also had the choice of getting close to, but that remains to be seen when I go back to see if the story's finale is at all more satisfying in terms of the whole 'happily-ever-after' shtick when I try another girl's route. Yeah, I like 'happily-ever-after' stuff as well as 'BOOOOOOOOOBS' stuff, i'm a connoisseur of cringe.

Anywho, I think the pros outweigh the cons really. I honestly recommend the game whether you're in it for the aesthetics, or whether you're in it for the story, and I sincerely hope there's yet another sequal.. Boobs. Boobs never change. Great character designs. Especially Michelle :) Already a fan, love the story to. Keep it up, be unique. Go far.. Definitlely better then the original Time Tenshi i loved all of it especailly the story and most in important the plot convience. I hope more gets added to the time window affects. For future plot convience and i hope that we more indepth on the Quantuam Guards in a pvp in the team Time Tenshi. Also i hope Kenji improves more and hopefully we can see him more in Future Time Tenshi episodes. Truly a good story not too indepth not too dark and pretty funny. I surely think we could more DLC in this special edition but thats just my opinion whats does anyone else think about this great game. And probably should get a award of 2018 for being one the best visual novels of 2018. Im also hoping for newer game mechanics if thats possible for this novel.
P.S. i hope we get a DLC regarding the encrpted files that Tessa could speed through and use that one quantum guard for practice in the time window with the 4D lenses.. Even though the fan service is tremendous here, I loved the story as well. No matter what, I had to just play it(read it) through in one sitting as I couldn't just put it away without knowing what happens next. A big thank you to the developers for putting all I like in one game!. This game has awesome huge \u2665\u2665\u2665\u2665\u2665 monster anime girls