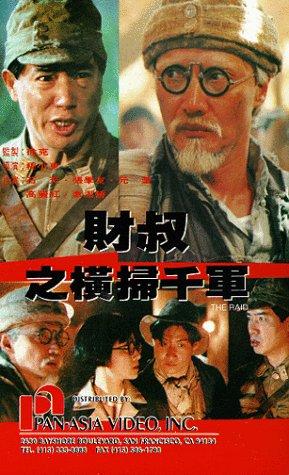 ****very mild spoilers****** Ching Siu Tung and Tusi Hark are so Hit or miss it's strange. As a Team they have worked together on the brillant and super fun Chinese Ghost story series (Siu Tung has sole directing credit but most believe Hark micromanged those films)as well as the the swordsmen series which had a good second entry and an amazing third entry(the east is red). Tusi hark is also the director of the criminally underrated once upon a time in china series and the high octane action film Time and Tide.

When you watch those films as well as his absolutely beautiful fantasy film the legend of ZU you see a master at work. The problem I think is that Hark slams out films from time to time. As many films of pure genius that can be connected to him just as many turds can be as well. Were not just talking about the Van Damme embarrassments. This looks like one of them rush jobs.

That being said I still had fun watching this comic book adaption. There a few moments where you can see hints of Hark's abilities. Mostly those come from the inventive use of comic book art and interesting dissolves. The martial arts in the film are Ok but suffer mostly from not having any real martial artists in lead roles.

As well the film has lots of gun battles which can be somewhat of downer since this is a 1930 period film. After watching films like Time and Tide and the killer these gun battles appear stiff and boring.

The humor gets old fast and is probably lost in translation as is often the case in hong kong films. The special effects, namely the plane is so laugh out loud bad you have to wonder what they were thinking.

In the end this comes down to the question why do you watch hong Kong films? If you can sit back and enjoy a movie without taking it or yourself to serious you might have fun.

Also The character of big nose...played by Corey Yuen(He directs most of Jet LI's stuff)cool cameo for us Kung Fu movie geeks. With THE RAID (1991), producer-director Tsui Hark and co-director Ching Siu Tung (fresh from the "Chinese Ghost Story" trilogy) try their hand at wartime action comedy. In Japanese-occupied Manchuria in the WWII era, a group of Chinese nationalists sets out to destroy a Japanese poison gas factory and their opponents include a Japanese military officer and his girlfriend who has built up a false public image as a Chinese glamour girl. (They are played by Hong Kong star Tony Leung Ka Fai and Eurasian actress Joyce Godenzi.) The Japanese villains align themselves with Emperor Pu Yi (the famed 'Last Emperor' who had been deposed in 1911 but was actually re-installed as puppet ruler of the Manchu-kuo government set up by Japanese occupiers during WWII).

The Chinese rebel band grows to include a local gangster (played by Jacky Cheung) and the film's nominal hero, Dr. Choy, a doctor/swordsman (played by comic actor Dean Shek), as well as a pair of young teenagers, one of whom is the doctor's spear-fighting niece. Since none of these characters is allowed to dominate the action at any given point, the audience never gets a handle on who to identify with.

Considering that the team of Tsui Hark and Ching Siu Tung were also responsible for the wildly imaginative Chinese GHOST STORY trilogy and the last two films in the SWORDSMAN trilogy (SWORDSMAN II and THE EAST IS RED), both masterpieces of 'wire fu,' THE RAID can only be classified as a disappointment. While there are some amusing, farcical moments (including a bedroom scene involving several alternating participants), the comedy seems out of place amidst such a serious conflict, especially when the gruesome effects of the poison gas are revealed, while the action scenes, emphasizing slapstick, minimize the dramatic tension and offer little in the way of the imaginative staging these filmmakers are known for. There's no real point to any of the action scenes other than the need to put on a show. There are no significant martial artists in the cast, so the filmmakers had no fighting stars on the order of Jet Li (from SWORDSMAN II) or Wu Ma (from Chinese GHOST STORY) to work with. According to John Charles' "Hong Kong Filmography, 1977-1997," the film is based on a series of popular "Uncle Choy" picture books from the 1930s. The filmmakers use drawings and animated bits as links between segments.

ADDENDUM (6/17/15): Having watched this again for the first time in 14 years, I was a bit alarmed to realize that the occupying army in the film is never identified as Japanese, nor are any Japanese flags or insignia displayed. The only clue we have is the fact that the character of Kim Pak-Fai (Joyce Godenzi), a Chinese singer and lover of the ranking occupying officer (Tony Leung Ka-Fai), is revealed to be Kawashima Yoshiko who, in real life, was a Manchurian princess who was raised in Japan and worked on behalf of the Japanese during the war. Her fanciful exploits as a Mata Hari-type femme fatale here don't quite match anything she did in real life, as described in the recently published biography, "Manchu Princess, Japanese Spy: The Story of Kawashima Yoshiko, the Cross-Dressing Spy Who Commanded Her Own Army," by Phyllis Birnbaum. Kawashima was the protagonist of two other films, the Hong Kong-produced biopic KAWASHIMA YOSHIKO (1990), starring Anita Mui, and LADY KARATE (1976), a Taiwan-made kung fu film starring Chia Ling, both of which I reviewed earlier this year for IMDb. She's also represented in Bernardo Bertolucci's THE LAST EMPEROR (1987), where her character name is Eastern Jewel and is played by Maggie Han. She was a fascinating, but tragic figure whose story has not yet been adequately presented on screen.