The All Through The Night

Original Title: All Through The Night
Genge: Action,Comedy,Crime,Drama,Thriller,War 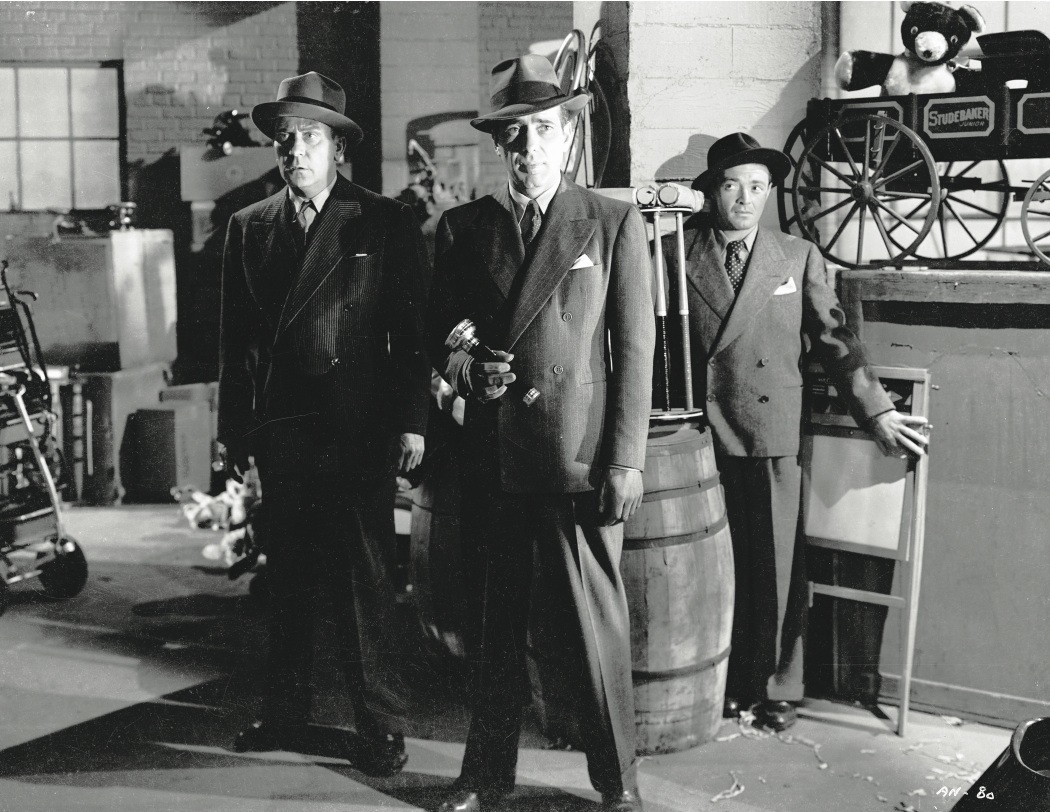 Runyonesque Broadway gamblers turn patriotic when they stumble onto a cell of Nazi saboteurs.
Broadway gambler Gloves Donahue wants to find who killed the baker of his favorite cheesecake. He sees nightclub singer Leda Hamilton leaving the bakery. When her boss Marty's partner Joe is murdered, Leda and her accompanist Pepi disappear. It turns out that beneath all the mystery is a gang of Nazi operatives planning to blow up a battleship in New York harbor.
Bogart: Let's Get Silly!

Mixing up so many genres into a single movie could potentially be a disaster yet I've perhaps never seen a better genre mash up than All Through the Night. I'm astounded at this movie's ability to have a bit of everything and pull it off so immaculately; bouncing back and forth between drama, comedy, action, murder mystery and even film noir. All Through the Night is the closest thing to a Hitchcock movie starring Humphrey Bogart in which an ordinary man gets caught up in espionage and becomes a fugitive for a crime he didn't commit with moments in the film such as the auction scene or Bogart deliberately getting arrested by police directly reminded me of North by Northwest; likewise the movie even stars Judith Anderson in the Mrs. Danvers hairstyle from Rebecca while Bogart's exploits against the movie's Nazi villains gives an urban Indiana Jones edge to the film. Even the movie's final climatic moment had me on the edge of my seat and thinking to myself "how is he going to get out of this?!". One top of that the film gets an additional boast with some truly superb use of shadows and lighting; All Through the Night really exemplifies the unique look of Warner Bros. movies of the 30's and 40's.

I may sound hyperbolic but the more I think about it, the role of Golves Donahue may be the greatest performance of Bogart's career; why you ask, versatility! Just like the tone of the film he is able to continually bounce back between being serious to just downright silly. Bogart has made me laugh during comedic moments in his other movies but I never knew he could make me laugh this side split- tingly hard; from subtle moments such as throwing the reserved sign off a table in a nightclub to the more obvious in which he infiltrates and stalls a secret Nazi meeting. At another point he delivers the line "More here than meets the FBI"; I do love me a corny pun but with Bogart delivering it just makes it funnier. All Through the Night makes me wish he had starred in more comedies.

On top of all that, the character he plays is a momma's boy yet he's still badass! I find this aspect of his character is hilarious in itself. There's something adorable about a tough guy who wears dotted bathrobes and loves cheesecake so much; exemplified even more with his mother being played by the ever motherly Jane Darwell. All Through the Night features a large selection of character actors at some of their best work and even features a young Jackie Gleason in one of his earliest film roles; what more secrets does this movie hold? If I was to find any point of contention with All Through the Night I wouldn't have minded seeing a bit romance between Bogart and Kaaren Verne, but with a film that has this much merit it's hard to complain.

All Through the Night is an anti-Nazi propaganda film and an effective one at that. I find the satire here is on par with The Great Dictator and To Be or Not Be as the movie pokes fun at Nazi ideology. The leader of the branch of Nazi spies is played Conrad Veidt whom there was probably no one better at the time to play evil Nazis. Golves Donahue is also a minor gangster which reflects the attitude of real life gangsters of the time who worked with the government to infiltrate Nazi spies. One scene in the film involves Bogart giving a chilling monologue on how the Nazis will take people's freedoms away in an argument against US isolationism in the ongoing war in Europe; all this however without even mentioning the word Nazi once throughout the film. Another interesting aspect of the film is the mentioning of an actual concentration camp Dachu. Being released in 1941 before the true nature of the camps where discovered, this is one moment I found quite chilling. All Through the Night was released in the US only 5 days before the attack on Pearl Harbor, although Warner Bros. had already long established themselves as an anti-Nazi studio.

By the time I watched All Through the Night I had already seen all of Bogart's major movies and figured I was largely finished exploring the actor's filmography, thus it came as such a delight discovering this obscure gem which satisfied me more than many of his more famous movies. This is type of movie which makes me want to scream out, "Why the hell it this not more will known?!", but then again its moments like these in which I live to be a cinephile. Humphrey Bogart tangles with treacherous Nazi spies in director Vincent Sherman's "All Through the Night," a witty World War II propaganda thriller that takes place before Uncle Sam entered the war against the Axis. "All Through the Night" boasts a terrific, top-notch supporting cast featuring Judith Anderson, Jane Darwell, Jackie C. Gleason, Phil Silvers, Peter Lorre, and William Demarest. Perennial Nazi impersonator but real-life German Jew Conrad Veidt of "The Cabinet of Dr. Caligari" battles with Bogart in this serio-comic espionage melodrama. A year later Bogart and Veidt locked horns again in Michael Curtiz's Oscar-winning romance "Casablanca," and Veidt played more Nazis in MGM's "Nazi Agent" and "Above Suspicion" before he succumbed to a heart attack in 1943. Scenarist Leonard "Mystery Street" Spigelgass and Edwin "Larceny, Inc.," Gilbert have penned a top-flight, lightweight, rollicking, white-knuckler that puts our hero between a rock and a hard place. "All Through the Night" resembles classic Hitchcock thrillers like "The 39 Steps" and "North by Northwest." Our wrongly accused hero stays one step ahead of the police to exonerate himself of charges he murdered a nightclub owner. Anybody who loves off-beat Humphrey Bogart movies will enjoy this humorous hokum.

"All Through the Night" opens with a group of Runyonesque Broadway gamblers sitting around a table discussing the combustible European predicament. Mr. Alfred 'Gloves' Donahue (Humphrey Bogart) interrupts their heated conversation. One of Gloves' minions, Sunshine (William Demarest of "Escape from Fort Bravo"), explains what they've been doing with toy soldiers and tanks on the table in front of them, "Just showing how England can win the war." An amused Gloves chuckles, "I'll arrange a conference between you and Churchill." Sunshine points out, "Don't you think it's time you got your mind out of the sports section and on to the front page." Gloves dismisses Sunshine's suggestion, "That's Washington's racket, let them handle it."

Gloves' problems start when Louie (Phil Silvers) runs out of Gloves' favorite cheese cake from Miller's Bakery. Gloves swears by Miller's cheesecake. When Louie tries to substitute an inferior brand, Gloves busts him in a heartbeat. Later, Gloves' mother 'Ma' Donahue (Jane Darwell of "The Grapes of Wrath")begins to worry him about Mr. Miller's disappearance. When Gloves stumbles onto Miller's corpse in the shop basement, things really begin to click. The NYPD is suspicious about Gloves from the start, but they don't arrest him until they find one of his gloves next to the body of a dead nightclub owner.

Everything hinges on finding a young vocalist Miss Leda Hamilton (Kaaren Verne of "A Bullet for Joey") that was seen with Miller before he died. As it turns out, Franz Ebbing (Conrad Veidt) and his second-in-command Pepi (Peter Lorre of "M") are planning a 9/11 style terrorist attack not unlike a similar act of sabotage in Alfred Hitchcock's own "Saboteur" with Robert Cummings about Nazis blowing up a ship in New York harbor.

Jane Darwell of "The Grapes of Wrath" is hilarious as Gloves' presumptuous mom who constantly interferes in her son's affairs. She gets Gloves into real trouble when she follows Miss Hamilton to the Duchess Club, night spot run by Marty Callahan (Barton MacLane of "High Sierra"),and Marty summons Gloves to get his mother off his hands. Lorre is particularly nasty as Ebbing's right-hand man. One of the greatest running gags in "All Through the Night" concerns Gloves' flustered chauffeur Barney (Frank McHugh of "Bullets or Ballots") who has just been married and cannot convince Gloves to let him have time enough to consummate his marriage. The Production Code Administration cautioned Warner Brothers about a lot of subversive dialogue with regard to Barney's situation. Apparently, some kind of deal was struck between Jack Warner and Joseph I. Breen over the salacious content of the dialogue. In the opening scene, for example, Sunshine argues that they can catch the Nazis with their Panzers down, a comment that drew the wrath of the Production Code, because of the implied sexuality in the remark. Nevertheless, the line made it into the film. Despite its racist content, there is a howler of a scene when Gloves' African-American valet Saratoga (Sam McDaniel of "Three Godfathers") delivers with supreme straight-faced solemnity to Miss Hamilton that "Things ain't as black as they look." Sherman keeps things moving in a dead heat as Gloves struggles to elude the police and get the goods on Ebbing and his dastardly bunch. Another hilarious scene occurs at an auction with some incredibly funny dialogue that sounds more like gibberish than actual words.

"All Through the Night" runs a close second to Raoul Walsh's Errol Flynn actioneer "Desperate Journey" as one of the best pre-World War II thrillers.