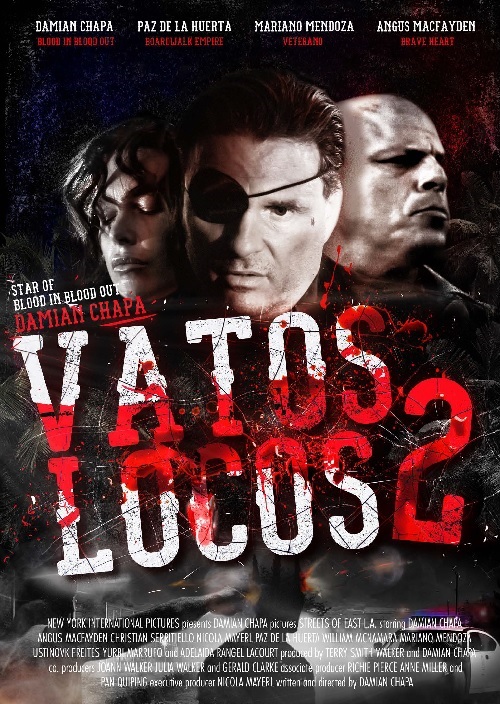 Chicano gangster Micky Solis finds that his family has been slaughtered by the Chinese mob. His whole life force turns to finding the killers. A slick lawyer (Angus MacFadyen) leads Micky to a "nun" (Paz De La Huerta) who shows him who the killers are that took his family from him. Micky unleashes a war of bullets and emotions on the family until each one dies by the same sword they wielded. The only thought on Micky's mind is REVENGE: VENGANZA.
I did not see the first film but read the quick information. Asians vs. Mexicans in East LA. In this film Mickey Solis (Damian Chapa) the Irish Mexican finds his family killed by the Asians and he gathers up some Mexicans to go after the Asians. That is pretty much it.

The acting was bad and the dialogue trite. The sound had an indoor echo due to low budget. Solis shows up to talk in the daylight, they talk inside and it is dark out. They shoot the passengers in a car, the windows are up and intact. Special effects were bad too. At times the film approached "so bad it is good" status, like the opening shootout with guys 6 feet apart, one behind a loveseat while the other is behind a small coffee table...his back sticks up above it. And the boring scene of the lawyer giving us history lessons.

The beach walking scene was a major WTF as our hero finds a book, "The Art of War" and converses aloud to his dead family. Is this supposed to be a low budget Irish-American art crime thriller? It was bad all around.

Guide: F-word, brief sex. No nudity. Filmed in English This film is horrible. Yet... so good! Its barely a film. Besides the fact that it was probably filmed with a cell phone, the direction, dialogue, editing, cinematography (if you can call it that) and overall production are so horrendous that it barely comes together as a film. But...

This is the most fun I've ever had watching a movie ! haha In the vain of Birdemic and The Room, this film is just balls-out laughter from start to finish. Definte guilty pleasure crap fest. Its terrible, but man.. is it fun!