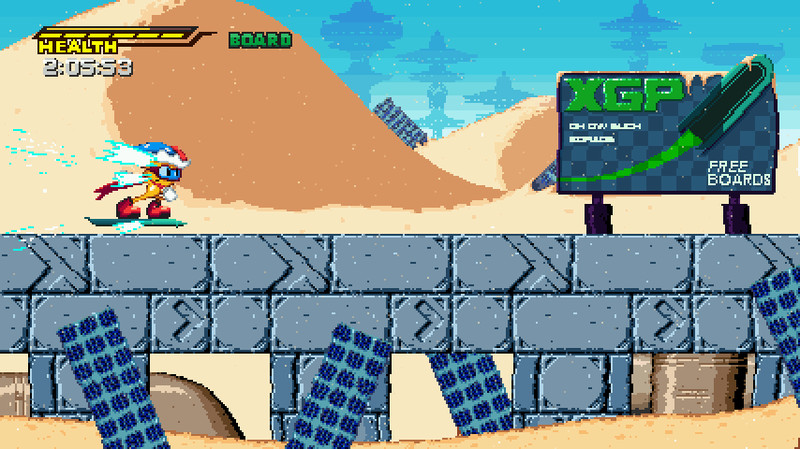 Spark the electric jester is an action/platformer video game heavily based on best classics from the 16-bit era from both sides of the aisle.
You play as Spark, an electric jester frustrated by the loss of his job! On one beautiful day, robots decided to take over the world. Seeing as Spark’s job was taken by a robot, he decided this was the perfect opportunity for his revenge! Spark will have to travel through the world and be engulfed in high-speed thrills and tons of action against the robots and the one who has taken his job. 1075eedd30 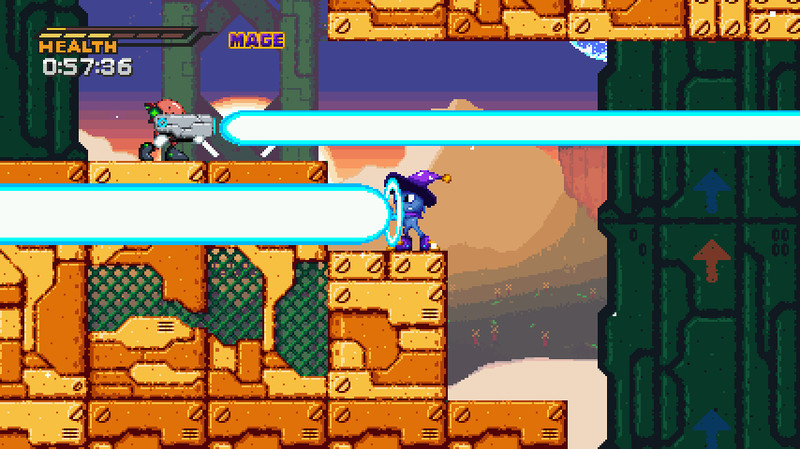 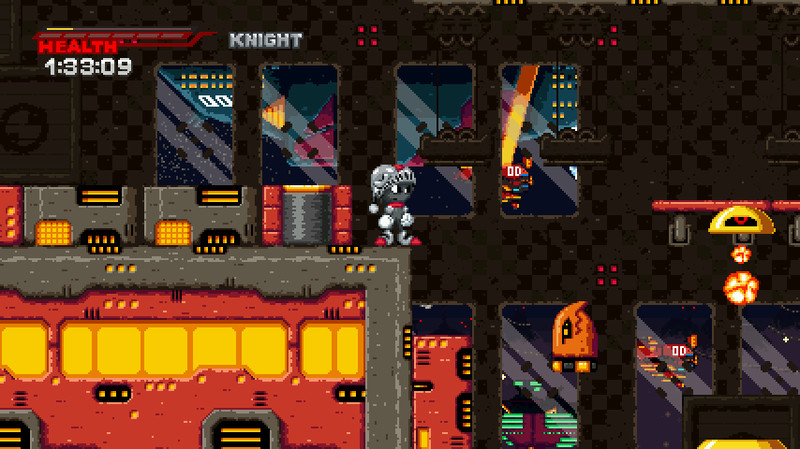 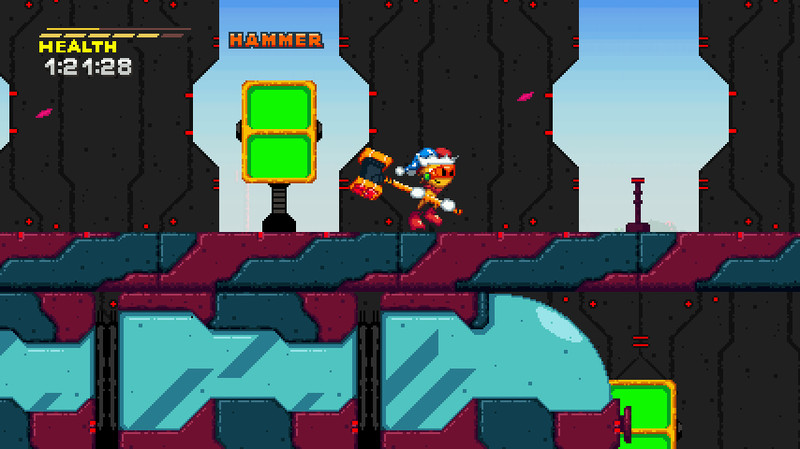 
I really wanted to like this game more, but it just wasn't meant to be. The graphics are fantastic, as is the soundtrack, and the costumes\/powers are a fun idea, but the zones just aren't that engaging. There's not much to collect or any good reason to explore, and aside from a few fun and challenging boss battles the game remains very easy for the vast majority of its 7-hour length. You've got infinite lives and health is almost never an issue (again, with the exception of some boss battles). To exaggerate a little bit, you could just keep running forward while spamming the action key, an approach that would quickly get you killed in a game like Sonic: no need for the player to feel engaged in any way, and it's only in the final two zones where you feel like you have to put some work into staying alive. More challenging modes are unlocked once you finish the game, but I had lost my interest by then. Also, the controls feel way too slippery for a platformer. (Note: This would be a "neutral" review if such were a possibility.). This game is good. If you like classic sonic games, you will like this game because it is *better* than the classic sonic games. Also that music made me bust.. It's interesting. Even though Sonic was just as popular in the early 90's as Mario, Mega Man, Castlevania, Metroid, Contra, Final Fantasy and Street Fighter 2, there are very few indie developers that have tried to update the Sonic formula. While there have been countless attempts at the listed contemporaries.
Even Sega themselves don't seem to be able to update the franchise effectively, seeing as their only Sonic game to be widely considered good in the last 20+ years is by a fan they hired to make a game.

Spark takes a whack at it and I think they did a very fine job. Though it twists the Sonic formula liberally (there is some Mega Man X and DMC concepts mixed in) the game has a very similar feel to Sonic. It's got the speedy play, loop de loops, springs, pinball bumpers, etc. These all work well without the cheap surprises some of the Sonic games are know for.

The main game has a character who can hold 2 of a large pool of weapons that all attack differently. There is also a lot of wall jumping and air dashing, this is where I see the similarities to Mega Man X. It also has a larger focus on boss fights than Sonic generally did and pretty well all the boss fights are a lot of fun

As far as level design, there are a few that are not as interesting but there are some very good levels as well. They all tend to follow the Sonic level design philosophy with the huge levels with multiple paths and they have quite a bit of verticality.

It also has a pretty great sound track that does sound like Sonic. Visually, it looks like a Genesis game and it looks good... except the cutscenes, which look like they were drawn by a middle school kid who was told to draw something like Sonic but not Sonic. It's weird to see the in game graphics look so competent and then see the poor art pop in when it tells the story. Speaking of the story, it's about as relevant to the experience as you'd expect for a game like Sonic, that is to say, it's nonsense.

Another thing that is very impressive is that once you finish the game, you are given the option to play again as a different character. This character plays very differently, so differently that the levels are all redesigned in order to work with this character. I personally found the second character to be even more enjoyable than the first.

If you like 2D platformers and action games, I would recommend this, even if you are not so hot on Sonic.. This game has criminally flown under the radar. I\u2019m only about an hour and a half in to the game, but I\u2019m confident it won\u2019t somehow collapse in quality. If you like sonic , or 2d platformmers in general you will probably find a lot to love here. Though the presentation isn\u2019t mind blowing, the gameplay does not disappoint, and the soundtrack is pretty mind blowing in its quality. From doing a little research online, there is also a ton of content here for the price. Can not recommend enough.. i enjoy this mostly remind me more like sonic & kirby together 2D platform race to the finish with weapon power ups game of the year. I have so much love for this game. The character powers, outfits, level design, story and music is all cute as hell. 10\/10.. This is the best Sonic clone imo. I know Freedom Planet exists but Spark has a huge focus on melee combat which appeals to me a lot. Stage design is fun, like older Sonics it doesn't focus on going fast 24\/7 and forces you to slowly handle some platforming. It also incorporates Kirby like powers found in clear crates. These change your attacks and abilites from speed to jump ability and dashes. This differentiates it so much from generic Sonic clones but this isn't the only trick up the game's sleeve.

A flaw in the Sonic games was enemy design. You touch an enemy, you're hit, killing momentum and platforming. Pretty much every platformer of the time did that but Spark handles enemy design in such a simple but impactful way: touching enemies doesn't hurt you but if their attack animation touches you then you take a hit. Helps the fast paced nature a lot and keeps the momentum going. This also means bosses can have more varied and animated patterns, and the boss design is easily my favorite part of the game. Some great patterns here, plus they all look amazing. Also very long so far, about 14 stages in and I see no end coming up.

I'm always up for some OG Sonic but my preferred genre is more action platformer like Ninja Gaiden and Spark combines both genres so perfectly that it's a crime how so little people talk about it. Freedom Planet has some higher production values but from a gameplay perspective Spark holds up much better imo. It has the diverse range of powers, nonstop level design, creative enemies and stage mechanics plus amazing bosses. Plus all the character designs from players to enemies and bosses are way more creative and interesting here. If you want beautiful graphics, a great chill soundtrack, great mix of the Sonic and side-scrolling action genres then you have to pick Spark up, especially for #8.