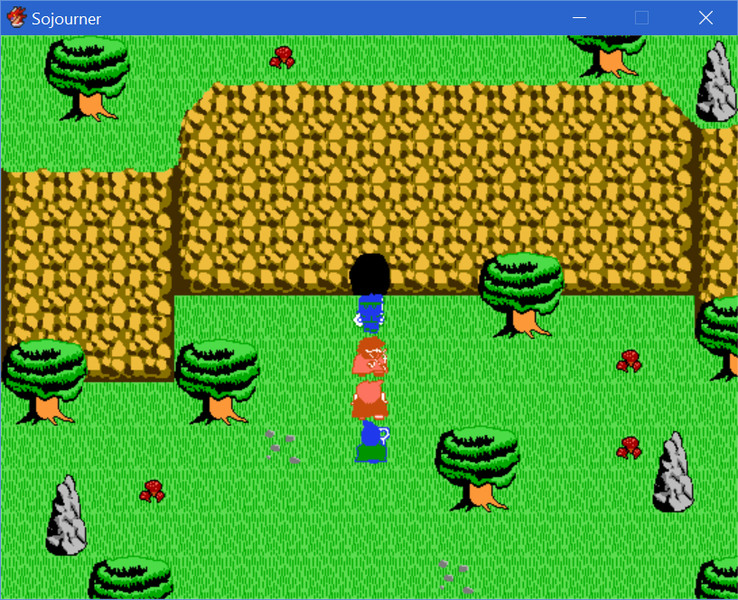 Simultaneously a love letter to and a parody of classic role-playing games, Sojourner is the retro RPG that the world has been craving, but just didn't know it. By gracefully mixing modern gameplay elements with a familiar retro aesthetic, Sojourner features everything that you loved from the 8-bit RPGs of your childhood and leaves behind everything you didn't. Drawing heavy inspiration from NES classics like Mother (Earthbound), Dragon Quest, Final Fantasy, and Legend of Zelda, while bringing in an original style and quirkiness all its own, Sojourner is a glorious blend of the old and the new, making for a very playable, very fun adventure for anyone who is a fan of the classics or simply a fan of RPGs in general. 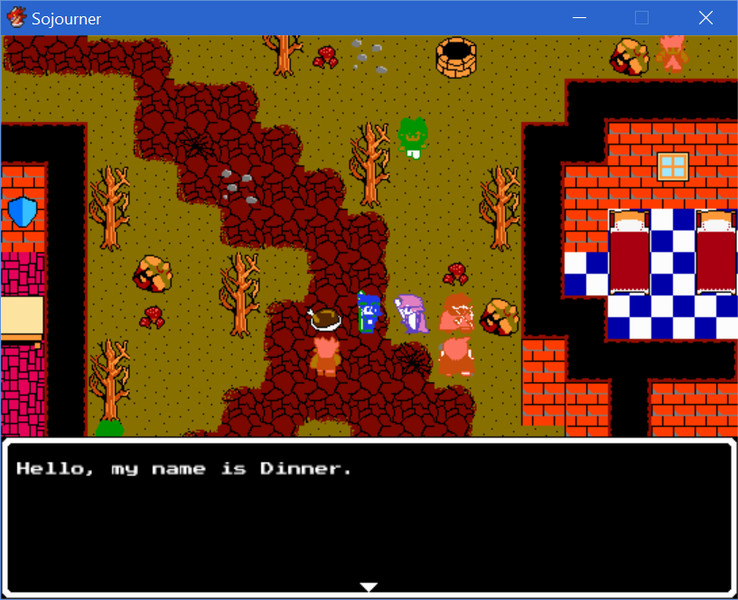 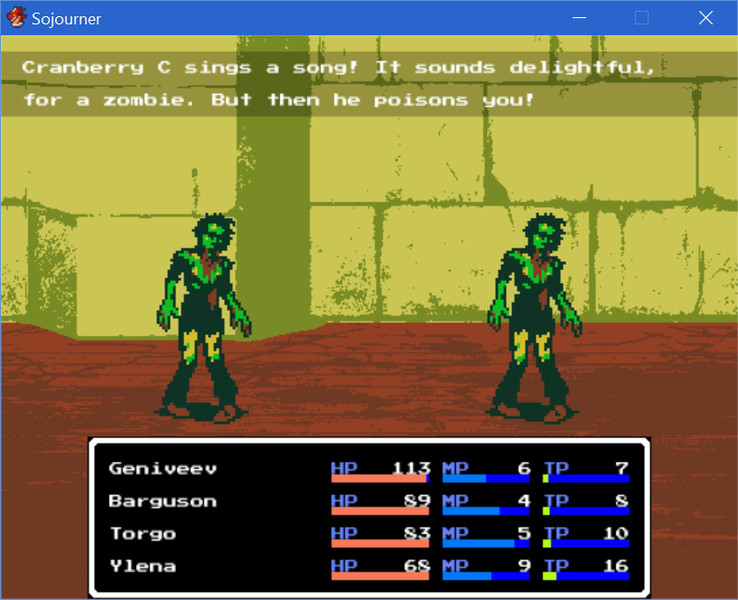 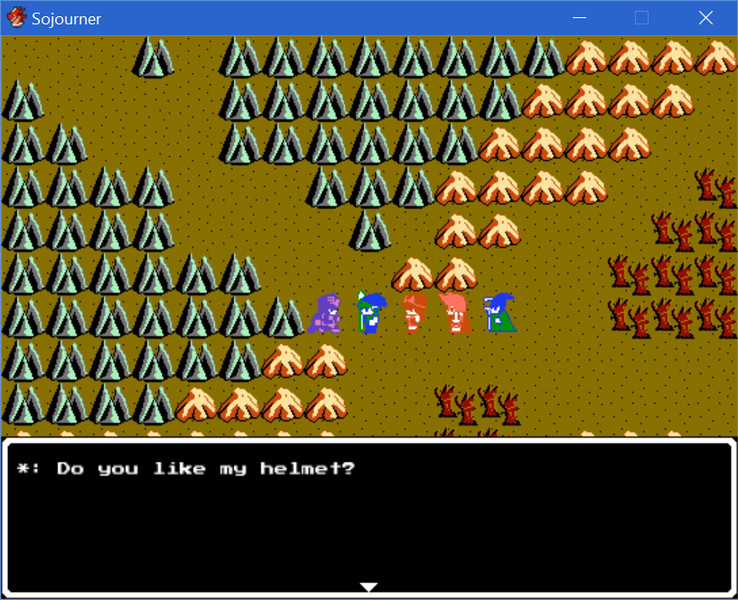 
When I first started playing Sojourner, I was expecting a fairly typical jRPG made from RPG Maker. Instead I got a rather charming and earnest RPG with humorous writing, good gameplay depth, and a fair difficulty pace for newcomers and jRPG veterans alike. It's hard to believe the game was made by one man for the most part, and it turns out he's a really nice guy as well!

I even listened to him on some indie spotlight podcast or something, and Mr. Squirrel was quite inspiring. Maybe I'll try my own hand at making an RPG Maker game some day because of him.

The only real complaint I have is that a few of the enemy sprites look a bit odd for some reason, but doesn't matter much compared to how well written the game is.

The game is good, probably better than Mother 3. (says someone who's never played Mother 3). This surely is a throw back to early days of Dragon Quest

The Class combination is very good one but if you can keep the progress of formal class it'll be better.
But overall this is a retro RPG with a good system and good selfaware humors.. The definition of a hidden gem, Sojourner could easily be missed in the crowd of games on sale. If you did, you'd be missing out on an absolutely heartwarming, 4th-wall shattering, and just straight-up interesting JRPG. With plenty of humor and humility, the developer riffs on the classic formula by introducing a unique party system, allowing for great customization. It's paired with pleasant graphics and a great soundtrack that clearly has a lot of love and effort.

More people should know about Sojourner, because it's fun and wonderful.. So this game is pretty great. The music, and the graphics are done in the style of the old NES games so many of us Millenials loved. Yes, it's an RPG Maker game, but it isn't one of the bog standard ones you find littering the store these days. :) The developer did the work to make the game actually look like a oldschool RPG but play like a morelate 90s one. I appreciate this myself because while I fondly recall those days, I seem to remember those games lacking quality of life additions that later games had.

So. I bought this game the moment it went on sale and finished it in 3 sittings. I am a fan retro RPG's and based off of the description I could tell that this game would be something special.

The game plays with familiar themes and video game tropes in a way that it felt like I was having a conversation directly with the developer about our collective video game history.

The writing is funny and feels honest and truthful while playing on ideas of morality and responsibility in a fantasy world setting. There is much to explore with easter eggs everywhere.

The mechanics are interesting and the playstyle is customizable so that I had to do a fair amount of strategizing to defeat the final boss which actually felt like a huge accomplishment.. If you loved playing Final Fantasy, Legend of Zelda, or other such games on the early Nintendo systems you will love this.

There were always two things about particularly Final Fantasy type games that I didn't like as much (that I've heard plenty others complain about as well):

1. SO MANY RANDOM MONSTER BATTLES OH MY GOD. They are less common in this game and there's a Pokemon-esque item that keeps monsters away for a bit. Inexpensive to buy in the shop and makes my life so much better. Even better, once you've played a bit, it gets BETTER. Eventually you will receive an item that allows you to turn off random encounters until you wanna turn them back on. Amazing. Perfect. Wonderful. Yes. This makes me particularly happy because there are a lot of fun hidden things in the big world and it's nice to be able to go looking for them without having to go through all those encounters!! (I would say, definitely turn encounters back on enough to level up, but it's amazing to have the choice.)

2. If you stop playing for too long and don't take copious notes while playing, you'll come back and have no idea what you were doing. Sojouner gives you a fun Telepathy Ring to contact the queen at any time to remind you about what you were trying to do. I haven't had this issue anyway because I have been binge-playing this because it is a load of fun and not so frustrating (thanks largely to the ability to turn off encounters when I don't feel like battling a load)... so I guess that's another feature that helps with that issue!

I'm at the very end of the game (I'm pretty sure) and have played for about 13.3 hours total (not in one go). I feel like there's a bit more to be done and this boss battle is kicking my butt, BUT when I get frustrated with that, I can go on a fun SOJOURN (heheh) to another place to train up, explore, do a side quest, and\/or get more fun items.

I used to (and really still do) love those old RPGs, but they really did frustrate me so much. Sojourner fixes a lot of what frustrated me while lovingly poking fun at the flaws and quirks of old games. It has some really lovely messages put in, loads of fun extras to find, and a wonderful sense of humour. Plus it's only $4.99, y'all! You can't beat that pricing! Seriously though, you guys should play this thing.. When I first started playing Sojourner, I was expecting a fairly typical jRPG made from RPG Maker. Instead I got a rather charming and earnest RPG with humorous writing, good gameplay depth, and a fair difficulty pace for newcomers and jRPG veterans alike. It's hard to believe the game was made by one man for the most part, and it turns out he's a really nice guy as well!

I even listened to him on some indie spotlight podcast or something, and Mr. Squirrel was quite inspiring. Maybe I'll try my own hand at making an RPG Maker game some day because of him.

The only real complaint I have is that a few of the enemy sprites look a bit odd for some reason, but doesn't matter much compared to how well written the game is.

The game is good, probably better than Mother 3. (says someone who's never played Mother 3). Good game with awesome 8-bit colors. Recommended getting it!


Anniversary Sale!!!:
Specifically, the 2-month anniversary! Most people do something special to celebrate the 1st-year, 5th-year, or 10th-year anniversary, but not me! I'm just happy and proud that Sojourner got released to the public a couple months back. If you haven't picked it up yet, this week is the time to do it.

At $1.99, this is an absolute steal. Except if you actually stole it, you wouldn't spend any money at all. It's a pretty easy game to pirate. But please don't pirate the game. Or if you do, you can send me a donation later to relinquish your guilt. Or you can promote the ever-living crap out of it; though, I would love if you did that whether you stole the game or not.

Also, happy Rosh Hashanah to all the game's Jewish fans, as well as to the Jewish people who have never heard of the game.. Massive update released! Version 2.0!:
Hey friends, I'm so happy to announce that Version 2.0 of Sojourner is out now (and your copy of the game has probably already been updated). Some big, much-requested changes have been made, and the game is extraordinarily better for them. Here are the changes from this latest update:

The version 1.1 update of the game is now live. In order to get the update, you may have to uninstall and reinstall the game-- but don't worry about your save data: it won't get erased when you uninstall. If you are worried, though, you can easily copy (CTRL+C) your save file (most likely located at C:\Program Files (x86)\Steam\steamapps\common\Sojourner) and paste (CTRL+V) your save file somewhere safe.

Here are my scruffy notes of what has been changed. Except for one game-breaking bug, this is mostly stuff that no one will ever notice.

Version1.1 Changes:
[FIXED]-Players who got Monk as the starting class would become invisible when they tried to add any new party members.
[FIXED]-Using the B button to back out of the "adding a party member" or "changing class" screens doesn't work properly.
[FIXED]-Finding previously-visited hidden areas on the overworld is nearly impossible. Now there is a glowing X that appears
[FIXED]-If you activate Infinity Repel, and then warp, it gets turned off-- but the game will say that it's still on. You have to use it twice more in order to get it to actually turn off again.
[FIXED]-Weird gray boxes around the list of places you can teleport to.
[FIXED]-One secret area had a tile that wasn't working properly.. Version 3.0 is out!:
Yes, the update that very few people were asking for has finally come out! I figured that, for various reasons, quite a few new folks have purchased the game recently or are trying it out for the first time, and they ought to have the best experience with the game possible.

Here are the changes in Version 3.0:

I wasn’t actually expecting to ever update Sojourner again, especially because I am hard at work on my next game. However, I have been learning a lot, and have been aware of a few of Sojourner’s flaws for a long time. It wasn’t toooo much effort on my part to update the game.

So please enjoy these improvements, and look forward to hearing more about my next game, which I’ll be revealing… eventually.