So Much Blood Activation Code [pack]

So Much Blood Activation Code [pack] 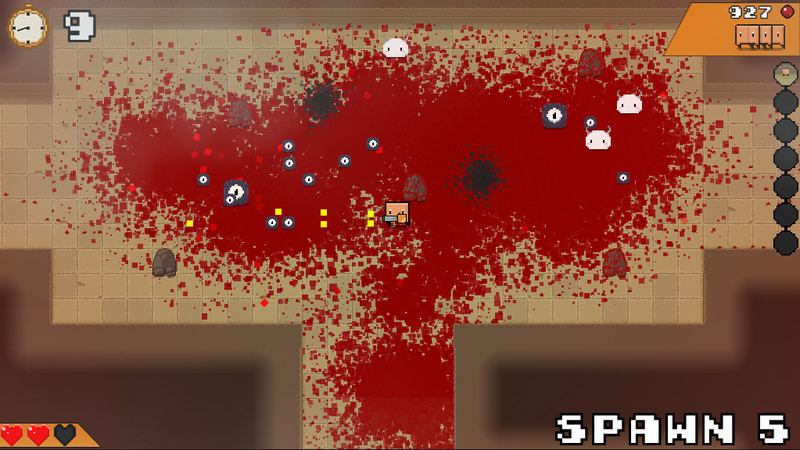 So Much Blood is an action-packed side shooter filled with countless challenges, baddies, and bosses! Supercharge your armor, discover new powerful weapons, and kick some ass, as you fight through treacherous hordes of enemies. Can you survive the bloodbath?

Try not to lose your shoes when you get thrown into a chaotic world without any kind of direction. Suddenly surrounded by dangerous enemies, your instincts set in with only one goal in mind: survival. You start out with a base set of Tier 1 weapons: the 'Pistol', 'Ray Gun', and 'Shotgun'. With the shopkeepers help (Greg) you may choose to upgrade your tier of weapons or invest in a set of armor. The overwhelming wave of enemies forces you to maneuver your way around this hazardous game world in order to reach safety. Choose your playing style including a rush strategy, grind strategy, and/or choosing a defensive or offense class for your player. Be careful as you new and improved enemies will continue to attack you, making you rethink your every move!

The game has a shooting mechanic not like most games, with the ability to only shoot left and right in a top down world you are forced to use the game world to your advantage. You'll need to figure out on your own the best fighting strategy to use. Blood is a serious part of our game, for every kill you achieve the blood splatters spawned what we call 'Blood points' or bp. Use these blood points as a shop currency created once in every new zone. 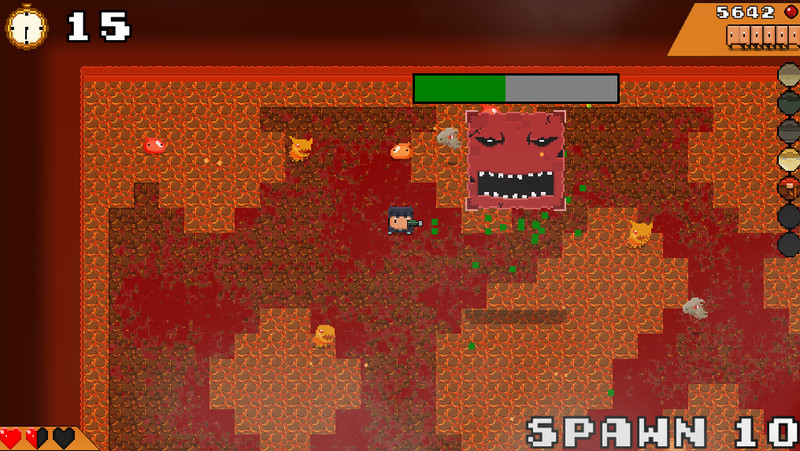 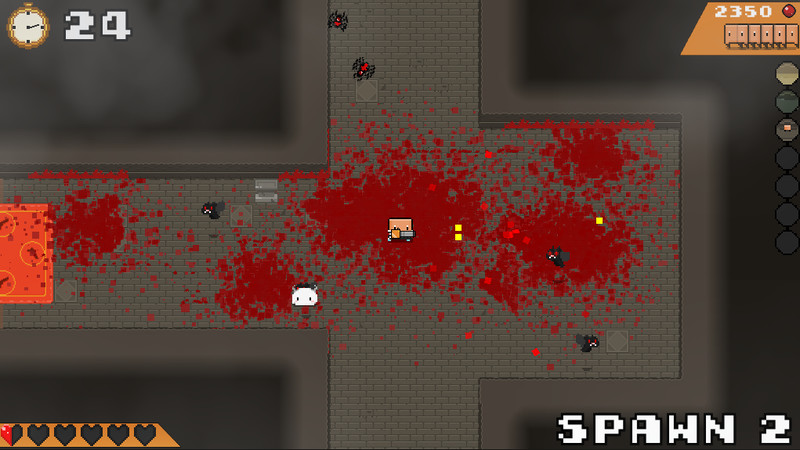 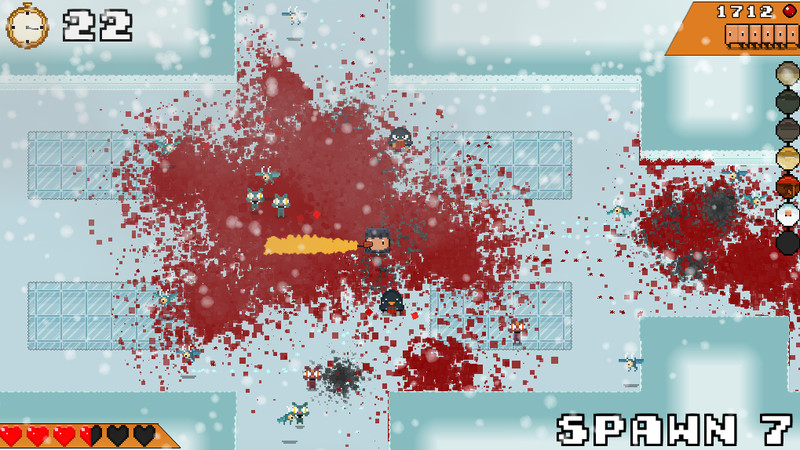 
The first time I started the game, the first thing that hit me is the music. The music is good. The game is addicting, I've played for one hour straight and didn't stop. The levels or stages have different feels to them. All the bosses are fun to try to beat. (Then lose all the lives) When you die you don't lose everything, (ex. points) whick makes it feel like every life lost has did somthing good for me. The shop is done extremely well. It's easy to navigate.

The music gets old quickly but you can easily turn it off and play your own music. The level design is bland. However since the levels are randomly generated, there is always a new level every time you start a new game.

Overall I give the game a 8\/10. The gameplay, levels, shop, and most obviously blood make the game addicting. This is a game I will always remember, because of the experice you have while playing it. This game it worth the money to give it try.. I don't know what to say about the game. It is fun but I get annoyed after a while, just the fact that you can't shoot up or down. Good graphics and all but the looping sounds of the weapons are horrible when the you face a wall. But after all great effort. I have only one recommodation if the player can't look or down make it at least that the player can use the arrow keys as well.. I bought this game because I like GM:S games, because I use it myself.
Also the youtuber makes nice tutorials on youtube, so I gave this one a hit.

I requested a refund after 4 minutes.
... and played this game for one other minute just for this review... ( TRUE STORY XD )

It has no azerty support, so I had to do Shift+Alt just for this game.
I had no idea what was going on, because it fires from itself and only left and right.

I feel really sorry for the devs, but I rather spend my 2.99 euro's on something else.

I was originally going to buy the game to support the developer... now I'm addicted to it.
I love everything about it!

Great work, I hope you make more games in the future!. So Much Blood is.. severely disappointing. I was pretty excited for this game, but then I played it.

The game is inherently flawed in design. You can move in eight directions, but you can only shoot left and right. This makes traversing and dodging enemies really difficult for no reason. The enemies themselves are practically useless, but some of the game's "mechanics" make them worse than Hell to deal with. This wouldn't be so bad if you could either shoot in multiple directions, or if the game was horizontally based. In that there was no vertical room generation, you just move left or right. But then that would make the room generation even more bland. So with that said, the easiest way to fix the broken mechanics would be to completely change them.

On top of the two-directional shooting, you cannot control when you fire, or even lock direction. If you want to move left but fire right, that's too bad. You are constantly firing, and turning around automatically makes your direction of firing flip, as well as the bullets that have already been fired flipping. (Which is completely nonsensical and allows the player to kill things that are literally in another room, through a wall)

And for my biggest grievance with the game, enemy spawning. When I played the game, I must have had enemies spawn on top of me at least a dozen times. It is absolutely infuriating<\/i><\/b> to take damage from something you cannot prevent, especially when it is a third of your health, and when the only way to recover health is to navigate the horrid maze of a level and spend your hard-earned grinding points at a shop.

I have given feedback and advice to the developer multiple times, but he always seems to discard my criticism and try to explain to me why it works for the game, and how the whole game is designed around the poorly executed mechanics. "You can get armor that prevents damage for a few seconds when an enemy spawns" is not a proper workaround for enemies literally spawning on top of you, and making you take unpreventable damage.<\/i> That should not be a thing. If anything, have two or three seconds of invulnerability base, and add a few more seconds with the armor. Or at the very least, give a spawning icon, akin to Enter the Gungeon, so you can see exactly where enemies are spawning before they telefrag you.

This armor that makes it unable for enemies to harm you when they spawn costs 1000 points. That might not sound like a lot, but it's at least ten minutes of grinding the same boring enemies over and over again.

From what I've heard from the game, there is only one track. One really generic, repetitive track that got old really fast. I found myself disabling the audio within 20 minutes. There may be more music later on, but the game is so boring and grindy that I couldn't bare to get far enough to hear a difference. (I played up until Zone 2.)

The dev added gamepad support, but it doesn't really seem like it was tested that much. Turning around with the joystick makes you stop firing for ~0.5 seconds. It doesn't seem like much, but when you can only fire in two directions (and you're constantly firing anyway,) you definitely should not stop firing when turning around.<\/i>

This game has many, many flaws that could easily be fixed if the developer would just listen to criticism and understand that it's not antagonizing, it's feedback. And this doesn't even scratch the surface, the GUI is really ugly, you cannot skip the unreasonably long introduction cutscene, the bosses are giant, overhyped sponges, the game uses at least four fonts, and some of the art looks placeholder, namely the shopkeeper.

If I could get a refund, I would. But it's been too long, and thus, I cannot. I whole-heartedly discourage you from purchasing this game, at least until the flaws are dealt with. But seeing how the updates have been going, it doesn't seem like that will be happening any time soon... I really hope the developer reads this, takes the feedback seriously, and at least tries to change things. I want to like this game, I really do. But in this state, I cannot bring myself to enjoy it.