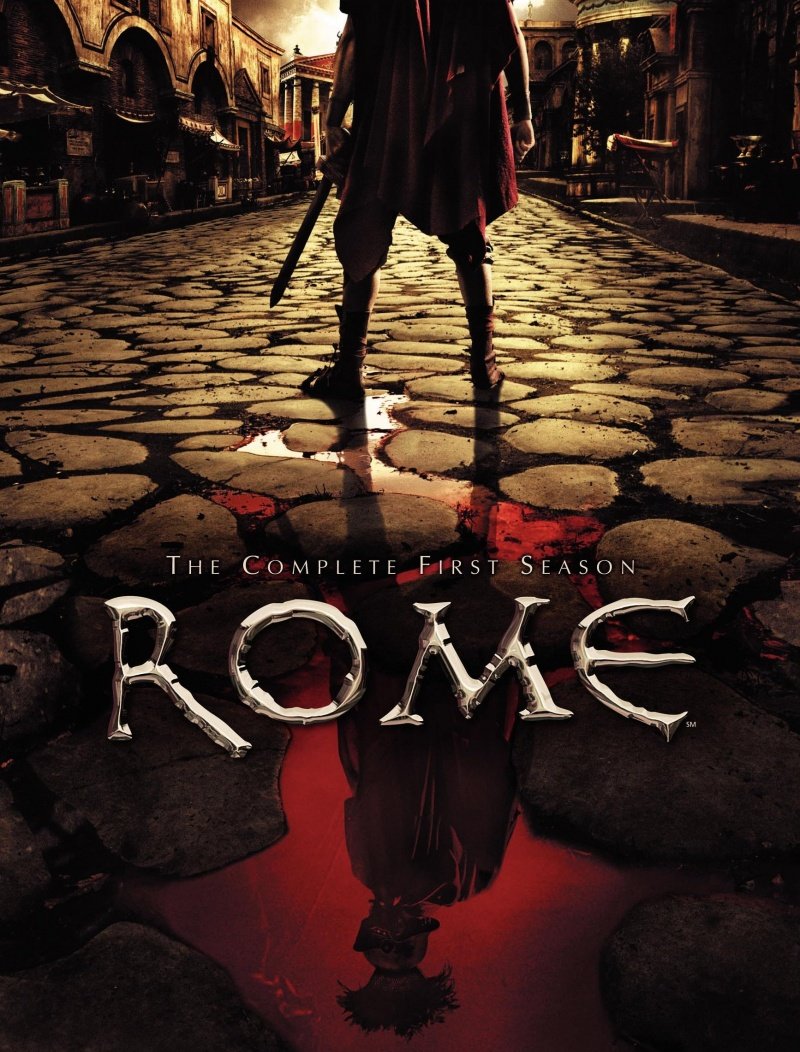 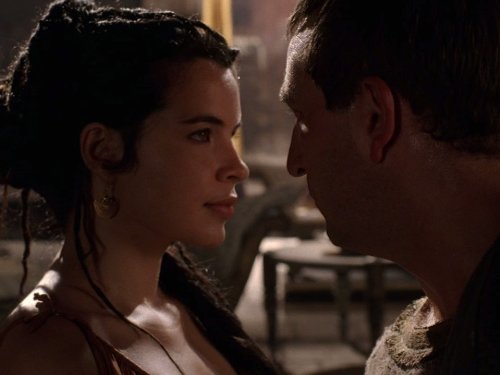 In this British historical drama, the turbulent transition from Roman republic to autocratic empire, which changed world history through civil war and wars of conquest, is sketched both from the aristocratic viewpoint of Julius Caesar, his family, his adopted successor Octavian Augustus, and their political allies and adversaries, and from the politically naive viewpoint of a few ordinary Romans, notably the soldiers Lucius Vorenus and Titus Pullo and their families.
A down-to-earth account of the lives of both illustrious and ordinary Romans set in the last days of the Roman Republic.
I just bought the season one DVD and watched the first two episodes. I am now officially hooked. I particularly like Kevin McKidd and James Purefoy as Vorenus and Marc Antony, respectively. This series is so rich in detail, it's as if you're watching a movie. The acting is superb and I really appreciate the "in your face" depiction of battles and bedroom scenes. "Rome" depicts the ancient city in all of its glory, debauchery, and intrigue. Those Romans sure knew how to connive to get ahead!!! The costumes and sets appear to be very realistic. Rome is not shown just as a beautiful city of marble and stone. The show also takes you into the back streets and alleys where many of the common people lived. All of the characters have their flaws, which again is true to life. I know they are currently filming season two and I can only hope for a season three. Kudos to HBO for this fine drama.
I Claudius was maybe the best miniseries ever. Now, there's Rome, and it's even better.

I agree with another reviewer, that quibbles about historical inaccuracies, such as accents or how old so-and-so should be, are silly pedantry. I've been a Roman history buff ever since my own high school triumvirate of Caesar, Cicero and Virgil, and I say that this historical fiction is both exciting AND quite accurate with the important stuff.

So far, every player has been terrific, in particular Ciarán Hinds as Caesar and Max Pirkis as Octavian. Julius Caesar was perhaps the most complex "great" figure in history. Was he a great populist, trying to champion the people against the Optimates, or was he an ambitious demagogue, who was using the Roman mobs to attain the imperium? Hinds depicts this complexity perfectly, while projecting a steely will that is shared by Caesar's emerging protégé, Octavian. Thanks to Max Pirkis's brilliant portrayal, we can already see the no-nonsense pragmatism, ruthlessness and brilliance that will propel this boy into becoming the greatest despot in history.

And what about that dissolute Mark Anthony? We can already see Actium in his face. And with Atia, I think Livia (as depicted in I Claudius) and Messalina have met their match.

And midst the struggle for mastery of Rome, we see the struggle of more common folk just to make a living. Rome makes the parallel stories of the Optimates and Centurian, now Prefect, Vorenus and Legionnaire Pullo a perfect vehicle for comparing the travails of different classes  their love lives, social lives, how they treated the servants, how they practiced their faiths, how they fought. Seen from these different perspectives (which we did not get with I Claudius), we get a three-dimensional view and, for me, the closest to feeling like one is actually there of any historical fiction ever produced.

And look at the production values. Is it any wonder, when we see who's behind the camera  Michael Apted and John Milius  that we have an immaculately crafted work?

By their commitment to quality of production and integrity of story, HBO and BBC are demonstrating what television can be. This is a wonderful, wonderful series. Anyone with a love of history, drama and spectacle should be devouring it with delight.
Sadly, no. The popularity of the show was enough to greenlight a second season, with an option for three more seasons afterwards. Seasons three and four would have revolved around the war between Octavian and Mark Anthony in Egypt, with season five focusing on the rise of Jesus in Palestine. However, due to the show's enormous costs, the cancellation was announced midway through the production of season 2. This forced the writers to end the Octavian-Mark Anthony story arc in the second season. The necessity to cover two seasons worth of history in a few episodes explains the large jumps in time had to be made at the end.

Due to the very solid receipt of the series, HBO executives later expressed some regret in the cancellation. Writer Bruno Heller is quoted as saying that he is still interested to give the series a proper wrap-up with a movie. (source: http://www.reuters.com/article/2008/12/01/us-rome-idUSTRE4B00VV2008...

For those interested in further viewing: the events in Octavian's life, concerning his later career, succession and death, are depicted in the classic series I, Claudius which starts in 23 BC (Rome season 2 ends in 30 BC). When Vorenus and Pullo learned that Erastes had taken his children, they storm his hideout and kill all of Fulmen's guards. When they confront Fulmen, Pullo says "Tell us where the children are, you might yet live." Fulmen scoffs at this because he knows what kind of man Vorenus is. Erastes admitting he sold the children into slavery wouldn't have boded well for him and Vorenus would have likely killed him anyway. So by lying and saying "I fucked them, I killed them and threw them in the river.", he is essentially killing Vorenus in turn. Had he told the truth, Vorenus would have had the hope of finding his children, knowing they were alive. But by lying and saying they were dead, would rob Vorenus of his will to live. As the creators of the series have always stated, they aimed for authenticity rather than accuracy. They enlisted the help of several historians and did quite an effort to recreate the Roman world, culture and habits into its tiniest details. The depiction of daily life, politics and warfare in Rome is therefore quite accurate, aside from some small issues (such as house decorations etc.) that still cause some controversy among historians.

The main story is also generally true. There was a long feud between Julius Caesar and Pompey Magnus that ended with Pompey's defeat, but Caesar was subsequently killed by his former enemies. In the vacuum of power, several groups kept fighting for the rule of Rome, which finally ended with the defeat and suicide of Mark Anthony and Cleopatra. The makers did, however, afford themselves quite some artistic licence with several historic facts and events, for the purpose of dramatic storytelling and to avoid unnecessary complexity.

The series greatly condenses the timeline of events and simplifies or alters both the politics and personal lives of people involved. For instance, Atia is depicted as a scheming, power-hungry vixen, which is quite contrary to historical evidence. She also lives through the entire series, whereas in reality, she died a year after Caesar, and was not present during most of the time depicted in season 2; Octavia, Atia's daughter, was never married to (and never divorced) a man called Glabius (as seen in season 1); she was married to someone else with who she had 3 children, all born after Caesar's death; the battle of Pharsalus was in reality preceded by the battle of Dyrrhachium, in which Pompey's army managed to defeat Ceasar's; The battle at Phillipi was not fought in one day; Cassius committed suicide during the first battle; Brutus was not killed either, he committed suicide after the second battle (although singly walking into the enemy's army could be considered suicide; his death by multiple swords was probably made to mirror Caesar's death); Brutus' mother Servilia did not commit suicide, she died a natural death (actually about a year after Atia's death); Mark Anthony already had two children with Cleopatra before he was married Octavia; he left Octavia to reunite with Cleopatra and have another child. Many of the real events have been moved in time to fit the time frame of the episodes better. For instance, Julia, Pompey's wife and Caesar's daughter, had already died years before the time depicted in the series; the siege of Alexandria already started before Caesar's battle with Ptolemy; and Cleopatra committed suicide 11 days after Mark Anthony's suicide.

Some accurate character traits known from historic sources made it into the show. Caesar was indeed of noble birth, but very popular with the commoners, also due to his habit of bribing people and being extremely merciful towards former enemies. Also correctly depicted is his brilliance as a general, being able to win several battles while being vastly outnumbered. Perhaps the most accurate characterization is that of Marc Antony, whom history describes as being a noted carouser as well as a brilliant general, and loyal ally to Caesar. His antagonism towards Cicero is also quite true; Cicero would described his disdain for Anthony, and wondered how someone of noble birth could be such a vulgar man.

Aside from altered facts, the writers inferred several facts for which there is no historical evidence (but technically no evidence against either). For instance, the secret relationship between Octavia and Marcus Agrippa, Mark Anthony's affair with Atia, the intensifying rivalry between Atia and Servilia, the incestual affair between Octavian and Octavia, Octavia's sexual relationship with Servilia, Servilia's active role in Caesar's assassination, Caesarion's escape from death, etc. The scene where Octavian helps cover up an epileptic seizure of Caesar's, which his mother mistakes for an affair between the two, is a combination of historical speculation that Caesar was an epileptic and an accusation from Marc Antony that Octavian had been Caesar's lover.

A completely fictionalised part of Rome is the entire Lucius Vorenus/Titus Pullo subplot. Vorenus and Pullo really existed, they are described by Caesar in his book De Bello Gallico (About the Gallic War) as rival officers. Everything aside from that (personal lives, historic roles, interaction with real persons) was created by the writers as a means to involve common men in the rich history and culture of the Roman Republic. The writers also invented Julius Caesar's slave Posca, his friendship with Caesar and his forced marriage to one of Octavia's friends.

The timeline for the series begins in 50 BC, when Caeser's term as consul ran out and the events of the story begin. They end in 30 BC, with the death of Mark Antony and Cleopatra. In the show this timeline seems to be greatly condensed. Despite the main action taking place over about twenty years none of the characters except for Octavian, who goes from a teenage boy to a man, and Caesarion who goes from an infant in season one to a pre-teen in season two, seem to age at all. Roughly 10 years pass in the two seasons of the show.