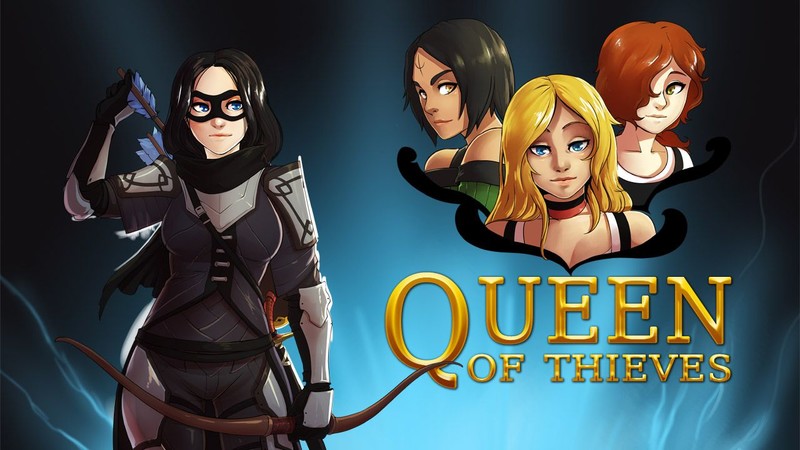 For a long time, the three sisters Joanne, Kira and Thalia were on their own, living their separate lives. They believed their mother Arianna, the Queen of Thieves, to be dead, executed twenty years ago in the town of Ahkra by the villainous Lord Raul Capello.

One day, their father Lysander calls them to Ahkra. He has big news: their mother, and his wife, could still be alive! At least, that's what a mysterious figure is telling him. They seem to be the only one who knows what's really going on, and they’re willing to help the sisters, for a price.

They'll need to follow in their mother's footsteps, robbing from the rich to meet the increasingly outrageous demands of their mysterious benefactor.

At the same time, they'll meet new people, who might become more than friends:


The game features simplified RPG combat and gameplay, beautiful manga artwork and an original soundtrack with a theme song. 7aa9394dea 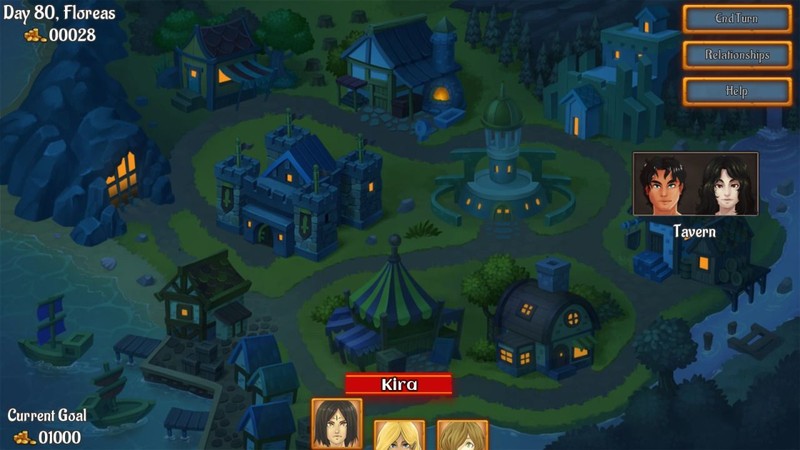 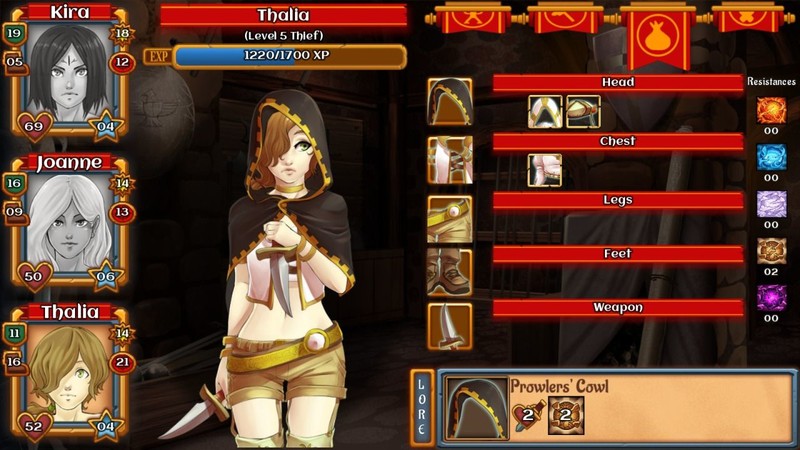 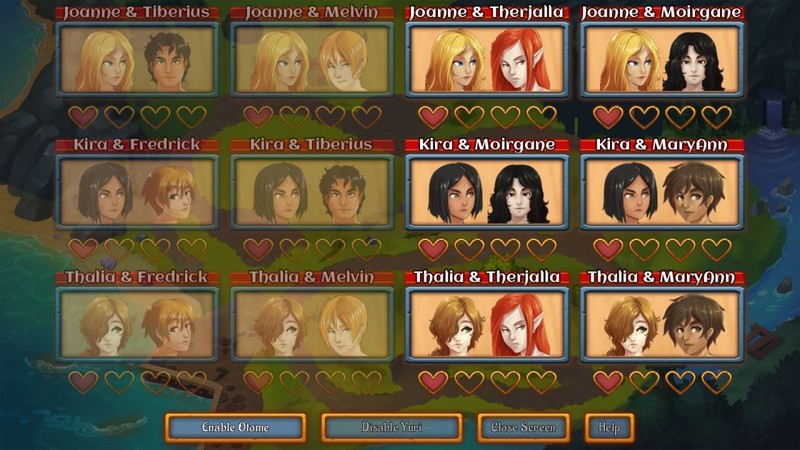 I constantly see a lot of people trying to compare this game to Loren the Amazon Princess- to be honest, I don't think that's really a very fair time. I mean, I'm having trouble comparing it to anything else they put out.

Long story short: A father calls his three daughters back to town from thier jobs from all over Aravorn, and hits them with surprising news: thier mother, who they thought to have been long dead, could still be alive. But the only way for them to figure out is to break into houses and get the money needed for the next piece of the puzzle, offered forth by a random hooded figure.

To be quite honest... it's not the best work from Winter Wolves, and I've got hours into things like Loren, Roommates, and Amber's Magic Shop to back that up. There's not much meat on this particular bone story-wise; and to be honest? Some of the goals you'll need to hit are kind of, well... they'll make you frustrated in a hurry once you've seen every relationship cutscene in the current step. I don't know if the step of the game puts a cap on the romance plots- if they don't, you're just better off picking your three partners and maxing those relationship points. for the bonuses.

I will give WW many kudos for making both straight and lesbian routes to romance, and for the ability to turn either or both off if they don't interest you, but I have to ding them on locking bonuses behind each one. Capping off each relationship gives you a bonus of some kind- maxing out the healer, for example, gets you half-off of all healing items. The blacksmith gets you half-off weapons, the waitress halves the time for thieving activities, and so on. If you stick to just lesbian or just straight relationships, you're depriving yourself of the opportunity to get the other three bonuses. Why not just make six of each and then let someone make a menu selection or something- present both of them during the first part of the game and let the player choose which one to put in charge of something?

Also, each love interest can only be romanced with one of two sisters.

The majority of the game, however, will be spent staring at the same screen- rubbing houses, and you'll be here for hours on end. You get four hours to spend every night- you can just randomly pickpocket people for chump change, you could scout out new houses to break into, find out info about a specific house, or you could get on with the break in. The only problem is, though... each of these options take up certain amounts of time, with variables- and you need at least two hours left to do a break-in each night. You can choose between three kinds of houses- merchants (easy), nobles (lots of $), and military figures (lots of XP). You creep through each house, selecting an entrance to try and get in silently, and then walking through the house casing rooms and stealing as much jewels and gold as you could get your hands on.

With luck, you'll end up with a few hundred gold and a few gems per house you hit. The only problem is, though, you'll need to do a LOT of grinding for the goals- on an ever-increasing scale, you'll need to make 1k, 5k, 15k, 25k, and 50k per "chapter" to advance the story, as well as be a particular level to survive the fights. Some of the latter chapters just started to drag on and on and on once all the other side stuff was finished- you can happily fast-forward shop days, though, but I would just go day by day until you clear all the romance stuff, and are of level to get stuff done physically, and then I would gun through multiple shop days to raise up money for supplies and gear to gain the most advantage I could.

The saving grace is that there's no time limit- you can take as long as you need to to finish the game, and can spend multiple years just grinding for cash as needed before moving the plot forward.

In the end, though... it just feels like there's not really a whole heck of a lot here. It's simply nightly grinding to raise XP and money, staring at the same screen. It would have been so much better if there's been more to this game- I mean, let's face it, something like Amber's Magic Shop managed to cram in so much more.

Does that make it a terrible game? No, it's still a Winter Wolves game, so I'll reccommend it; but I can't say that I would recommend this one as the first WW game someone should own, or even the first venture into Aravorn one should own.

I'd say buy this game if you like other WW stuff, after you've dropped for Loren, and then if it's on sale. It's still good fun, but it's not $25 good. If it gets under 20, pick it up then.. is fun. :-). Now let me start off by saying I am a huge fan of this genre (visual novel w\/ RPG elements) and of the developer, Winter Wolves. However, I cannot recommend anyone this game unless it is on sale. It seems that as the developer starts chugging out more games per year, the quality of them keeps dropping. None of his latter installments can stand up to the original Loren The Amazon Princess.

Cons:
_The writing is so bad. It's bland at best, atrocious at worst.
_The plot makes little sense, while the ending is very rushed.
_The gameplay is repititive; even more so than the one of Amber's Magic Shop, a crafting game with no combat system, and that says something.. Totally worth it! :). Not so much a fan of the rpg part of the game.
The main story always recommends a certain level (5-10-15-20-25)
And by the time I hit 20 I was really bored with it, and then of course it turns out you still need to grind to lvl 25.
At that point I just quit, and started a new playthrough in "visual novel" difficulty.

You only get to choose between 5 weapons for each character, and 5 armor sets (including the one you start with).
So after you get one of those, literally nothing changes for combat anymore.

Story-wise I was just disappointed that there was no comment when going for all 4 romance options for 1 girl.
And likewise if 2 girls were courting the same partner...nothing.
. so 3 hours in and i have to say i'm finding this game fun if simple my one issue is that it's a pain in the\u2665\u2665\u2665\u2665\u2665to level beyond that the romance can be turned off or you can have it set to one type of pairing (yuri\/straight).