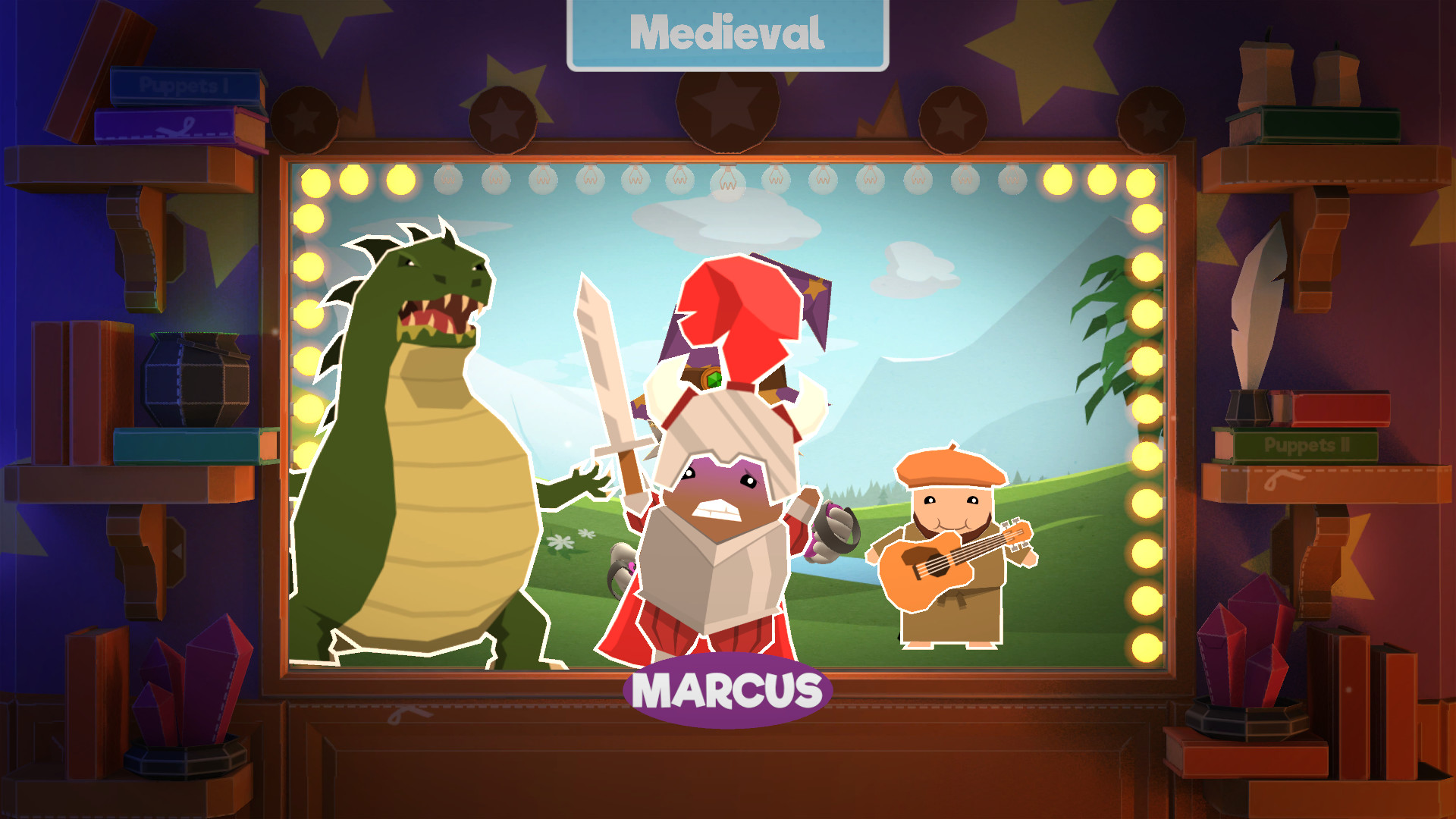 Act for your friends, try to make them understand what’s going on, but most importantly - make them laugh!

Right now you get:


Puppet Fever is local multiplayer party game where you take turns as the acting star of a virtual puppet theatre! Find yourself a friend or sibling, no additional controllers or headsets needed. Together you will become digital puppet masters. 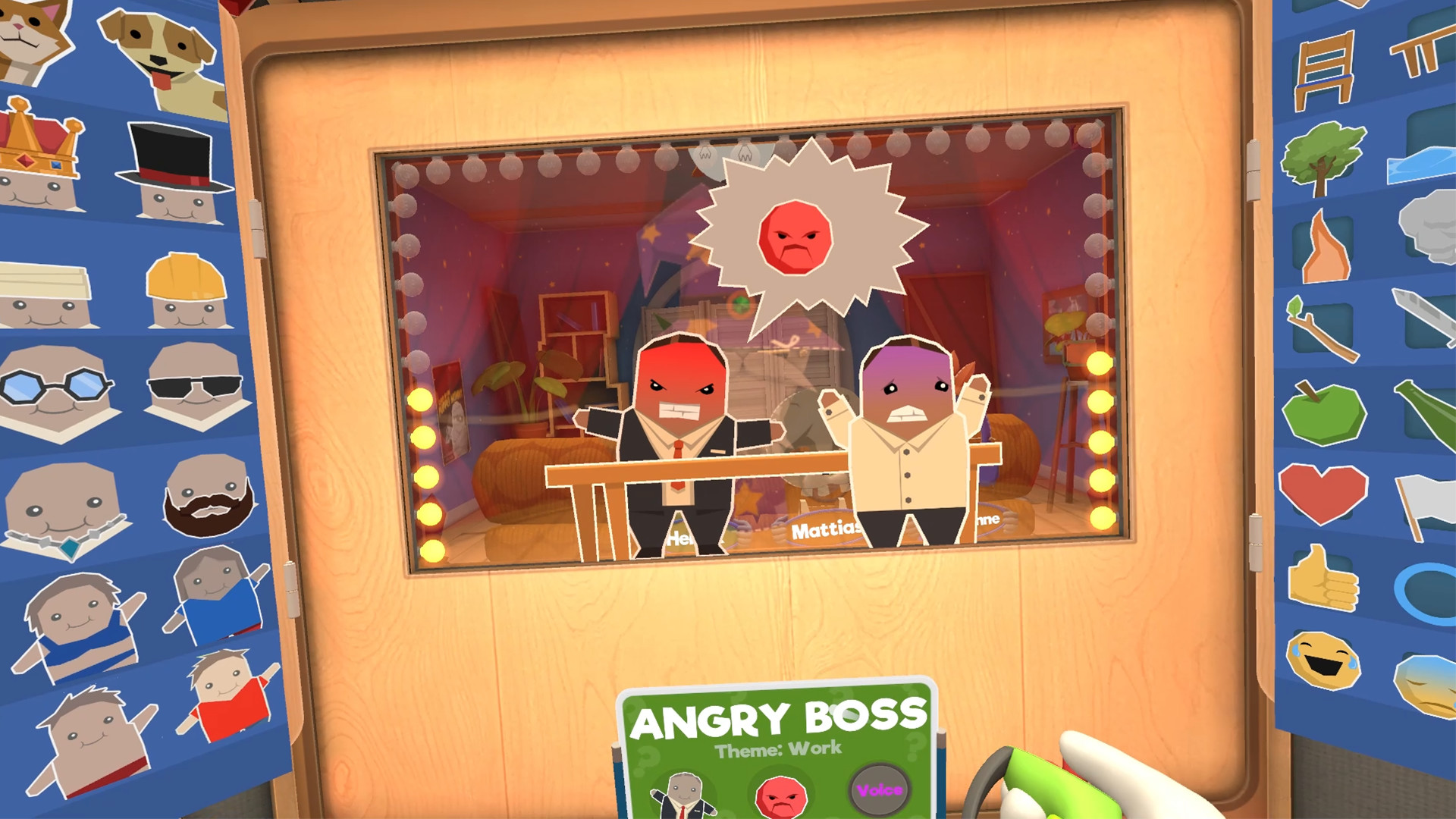 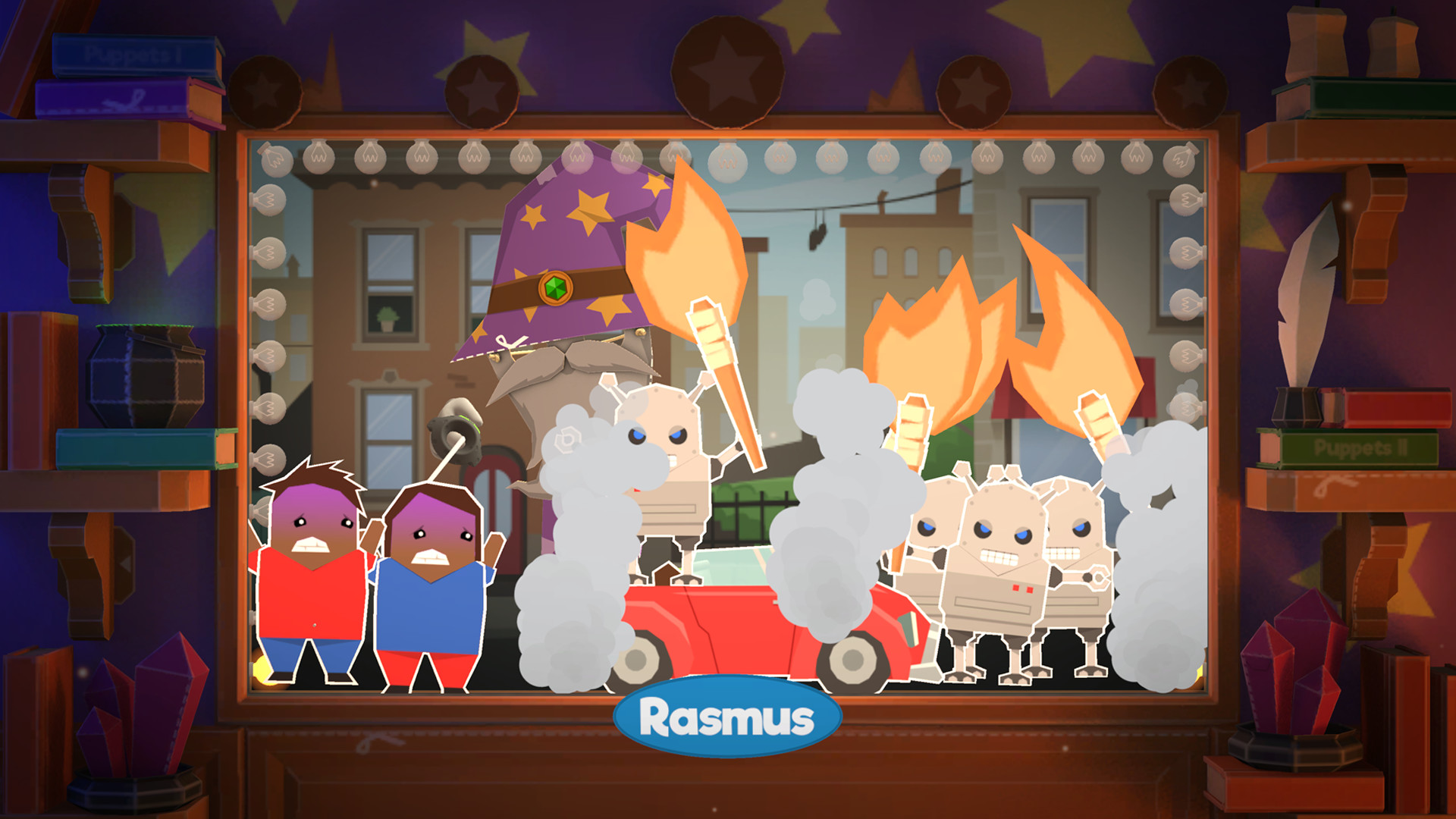 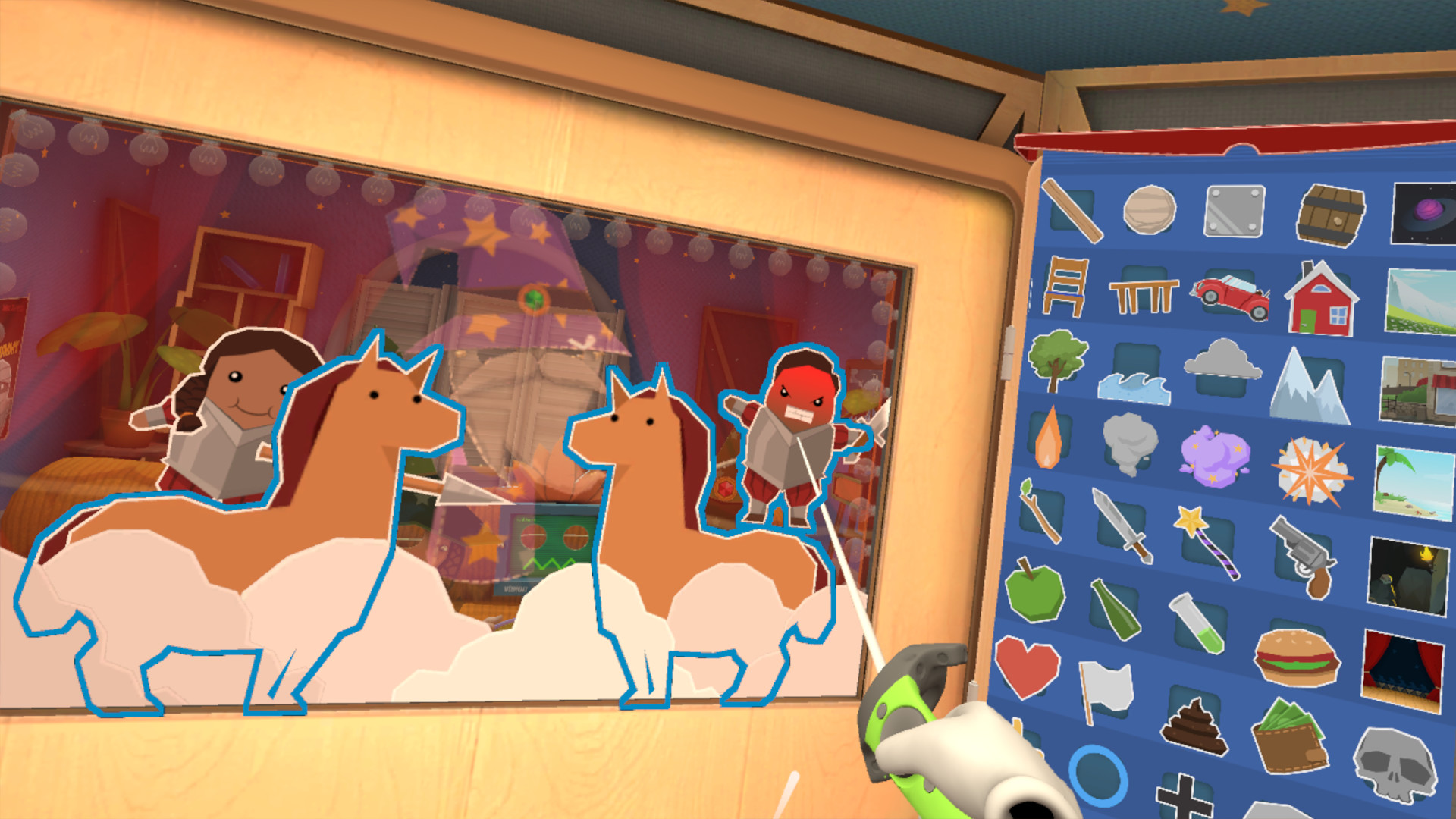 
Easy to play local co-op puppet theater! Supports hot-seat local multiplayer matches with the spectators viewing on your monitor - while the VR player sees their avatars viewing the show :) You try to puppet-mime the clue you've been given, if anyone shouts out IRL what you're acting out, you throw the card to their avatar for the point. Very simple concept but more highly polished than the majority of VR titles out there - surprisingly so!

The only improvements I can see that the game could use are more puppet options/interactivity/combinations between multiple puppets, and the possibility of more clue variety. Some of the clues are too easy and you can guess in a couple of seconds, like movie names - while others are quite obscure like certain emotions/feelings. But despite that, great game - does exactly what it sets out to do. Lots of fun in a group of 4.. http://www.hardcoregames.biz/puppet-fever/

this is a virtual reality only game so you need the hardware, this one would be a good choice for the kids to play. Fun! Played for about an hour straight with my fiancee, who rarely plays VR; and she seemed to really enjoy it. Think it'll be fun with a group over as well. Can't beat the price right now for under 4 bucks if you're looking for a decent local co op VR game.. Super-cute little sofa co-op concept. It's essentially just charades via puppetry, with some handy computer magic sprinkled on top. Adding dress-up and emotions to your little protagonists in the 90 second limit is all good, and then bouncing them around a set or dancing a handy prop is all suitably daft too. There seem to be a decent amount of interactions between the entities (I accidentally blew up my 'car advert' with what I thought would just be a cinematic explosion).

All of the game functionality (awarding points, handing over) is pretty slick, although it could probably do with even more manipulations within the scene itself (changing item / clothing colours etc). But I suspect given how cheaply I got this, and with the last update being in June, that dev has probably stopped now :|

Rating: 3.5. This game is quite a bit of fun... while the content lasts. Definitely worth buying on sale (<$10), but I question the full-price value unless/until customization options are present. If you plan to play with different friends, though, it's replayable. I bought it at 75% off and it was absolutely worth the price of admission. How much would you pay per hour of fun when going to an arcade? If it's more than a dollar, you've bought this game on sale. Definitely recommended when on sale.

Pros: Super-easy to pick up. Nice asynchronous play with other players in the room. Very cute, family friendly, fun all around. Good for 2-4 players.

Cons: Unskippable intermissions. Monitored audio cuts out when the headset sleeps, i.e. when you take the headset off, which it requires to move to the next player or during intermissions. Limited card selection. No ability to customize or even purchase additional content, so limited playability unless you're frequently showing it to new friends. Player limit is, well, limiting, but I suppose you could do teams.

TLDR: Buy if a sale drops the price to under $10. I got mine for under $4.. Interesting game and looks beautiful in VR, could be better if player can create their own words.


v 0.7.5.a Text hotfix:
- Fixed a bug with text not being displayed when playing on a 4k resolution. 0.7.1 Update: Mixer Chat and dedicated Puppet Master!:
Changelog:

- Added Mixer chat support in VR, play over livestream!
- Mixer chat does not yet support emotes, but we're working on it.
- Added dedicated Puppet Master mode (no player swapping, perfect for livestreams!)
- Expanded options in game setup.
- Feedback on some menu buttons.
- Tweaked scaling of some puppets.
- More frequent intermissions during long games.
- Added additional info signs regarding controllers.
- Changed the font on info signs in order to improve readability in VR.. Free Weekend and launch!:
We are still alive!
Puppet Fever is soon coming a point where we will exit Early Access and launch 1.0! We celebrate this a bit early with a free weekend, so make sure to tell your friends to try it out!.