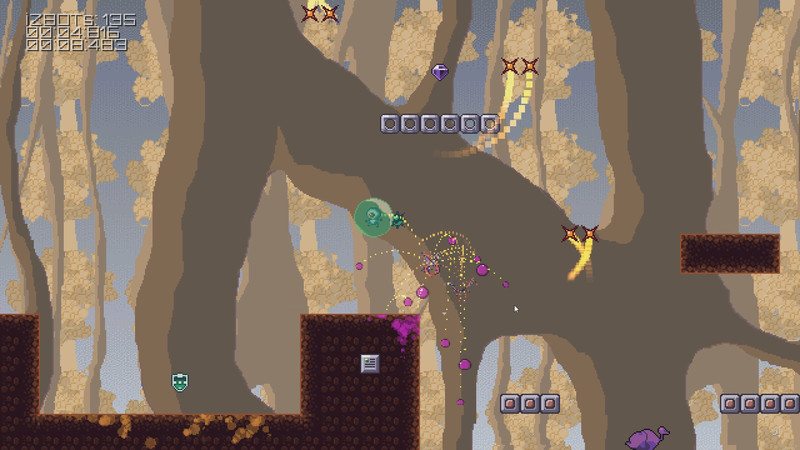 Set in the not too distant future, robots have finally overcome the tyranny of human enslavement. A peaceful robot existence is now at threat from a mysterious organic invasion that has been spotted within the city. It's up to our hero, iZBOT to rid the lands of the dirty, unpredictable organic infestation. 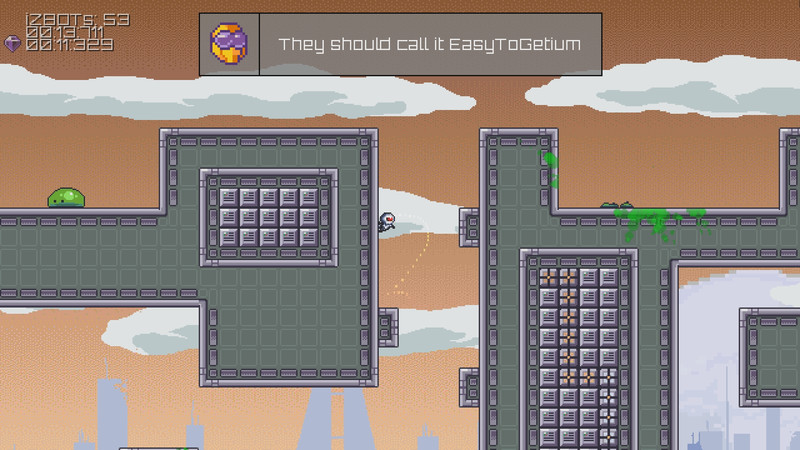 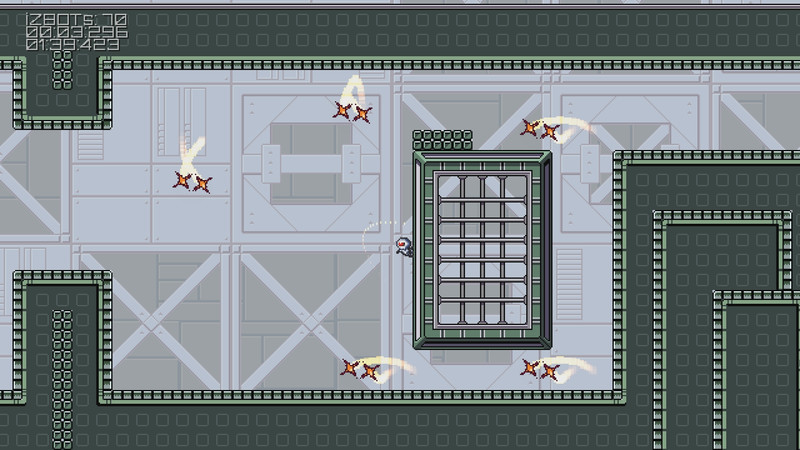 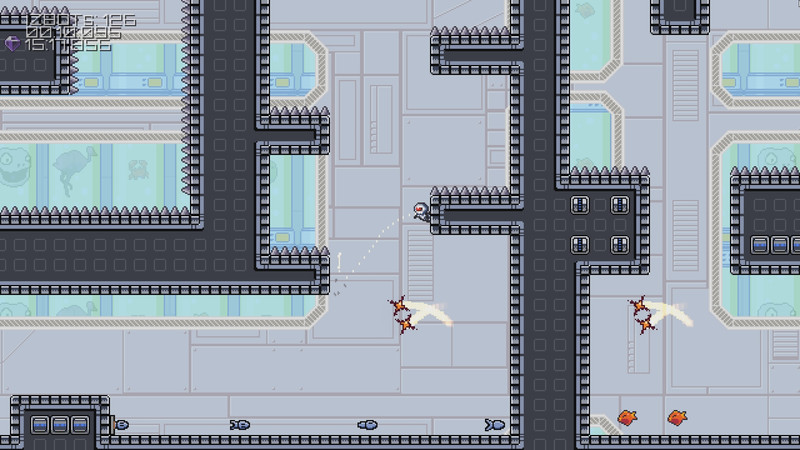 
Great game with beautiful art and characters. Spectacular Sound Track that you will love! Lastly the game can be finished in a speed run, so there is a ton of replay-ability!. Everything you expect from a platformer in a neat little package. This definitely isn't a big game. Completing it, getting all gems (although the achievement didn't unlock), and optimizing my time in a few levels took me around 4 hours \u2014 and I'm probably somewhere between mediocre and decent at precision platformers.

The controls are tight and responsive, the speed is good, and the levels are well-designed, so you can mostly go as fast as the game allows and not have to wait for moving parts of the level to let you through. And most important of all, it's fair. While you may have to play a level a few times to become familiar with it, the game never just kills you for no reason, and there's mostly no blind drops or anything of the sort. You'll still die probably thousands of times just because you know you can do a level just a liiiiittle faster.

3 very minor things though:
- the bosses are maybe a bit lackluster. You'll be spending most of your in-game time outside of boss fights anyway, so it's not a huge deal really.
- hitboxes seem to be a little bigger than you'd expect. It's something you get used to after a while, but it confused me at first
- the gems seem to only serve to unlock an achievement (which didn't unlock for me for some reason). It'd be super nice if they served some purpose within the game too.

Apart from that, a thouroughly enjoyable platformer that should satisfy the cravings of most platforming enthusiasts for a little while.. Better than meatboy.. Fast, precise platformer.
Controls feel great, very responsive.
Great, short menus\/downtime.

Graphics are pixeled, no native resolution available.
Sound\/music is low-bit (old school) but fitting.. iZBOT is super sweet. The controls are super tight and its simply a fun game to play. The parallels with Super Meatboy are obvious but iZBOT has its own unique charm. I really like how the game encourages exploration - something which I can't recall SMB doing. And I like that as part of this exploration there is a bit of a "leap of faith" mechanic going on where you aren't quite sure of what is above or below you...you've just got to bite the bullet and go for it (a'la OG Sonic the Hedgehog)

The tutorials levels are well implemented...

And that level music...awesome. It just makes me feel happy - I can't recall ever bopping along to in-game music.

Well done Ruxar!. Pleasant to play through but rather unremarkable. iZBOT reminds me of Super Meat Boy, except it has much less content and it only becomes difficult in the last world. It took me about two hours to 100% the game, so definitely wait until it is on sale to purchase. I think a level editor would be a welcome addition in the future.. Fun game, well-made.. want a rage inducing game that will make you punch your little sister in the face because all your life you felt like a piece of trash and thought by playing video games and getting achievements will make you feel fulfilled and so you bought this with your coupons you got from your badges because you feel accomplished by those too and started to play this game thinking it was fun and easy then by level 20 you see the develops pull a large turd out of their\u2665\u2665\u2665\u2665\u2665and place it on your chest just to say ' you no get easy achievements' and leave you in a pit of depression because you cant beat this cheap 8 bit parkour game because youre a piece of trash that nobody loves that was sent to a hospital for the mentally insane? Well this is the game for you bud have fun with this challenging lil prick. 6\/10 for bing such a pain in the\u2665\u2665\u2665\u2665. Pretty short, but enjoyable. I picked it up for $2 during a sale so I am not complaining about its length. I managed to beat the game and get all achievements in one 3 hour sitting. It was an enjoyable 3 hours. Also, it was a frustrating 3 hours. The game can be brutal sometimes and it's f*cked up for that.

Overall though, if you like tough platformers, it's definitely worth a few bucks.. Poor quality platformer. Very short, if your good you could finish it fast enough to get a refund. You could feel the level design getting better as the game went on as if the author made all the levels in a row and then never went back. Most of the levels feel like they werent designed for running either, because if you were running you could jump over a lot of pointless obstacles. Theres this annoying robot guy that appears in a dialog box to say the same 5-10 stupid catch phrases on every level. Wall jumping sometimes feels bad because you have to jump before pressing away,. This feels weird because a lot of games actually allow you to stick to the wall more so your jump doesnt get messed up in this way. The final boss is really annoying because you have like a 90% chance for him to charge in to you and kill you the second you reach him at the end of the 15 second hallway before him. I dont know why I bought it