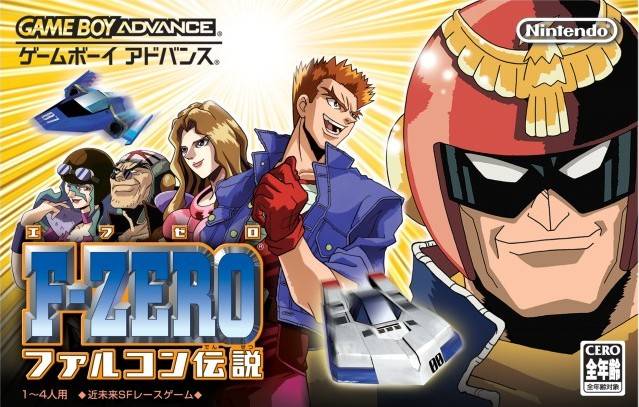 Based on the classic Nintendo series, GP Legend tells the story of Rick Wheeler, a detective who wakes up from a cryogenic sleep from an accident while pursuing an escaped villian named Zoda. He discovers that he is alive in the year 2201. He ends up competing in the F-Zero racing tournament where many beings from across the galaxy compete. He also joins the Mobile Task Force, a special police force that investigates crime in the F-Zero circuit. While Rick is competing in the races, he's also to capture a dangerous villian named Black Shadow and his Dark Million Orginization. That organization also was responsible for cryogenically evolving Rick's old enemy Zoda, who is the other reason why Rick's on the team. Sometimes, he'll have an encounterment with the legendary racer and bounty hunter named Captain Falcon.
While DiC has taken Nintendo and Sega characters to Saturday morning cartoons successfully, 4kidstv tried to do just that with F-zero, with the well-known captain falcon, but the story doesn't revolve around falcon. it actually revolves around a detective who was shot while pursuing a criminal in the year 2048, and was frozen for many years until he awoke in the distant future, where he met some of the people who run the F-zero races. he himself gets his own machine, and soon ends up in pursuit of the man that shot him.

4kidstv didn't promo this show much, because they knew it would bomb. many video game characters have found success, like Mario bros and sonic the hedgehog, on the boob tube, while shows like Kirby; right back at cha, Donkey Kong, and this one haven't.

If this show was promoted more, and maybe moved to an earlier time slot, it probably would have shown as much success as Sonic X, Shaman King, Winx club, and Bratz have in the past few years. however, 4kidstv dubs all their stuff, because most of the stuff they show is imported, and their line of voice actors is quite limited, while DiC wasn't.

Bottom line, stick to the games and you most likely will never see this again. 4Kids is notable for their cheesy voice actors and novice dubs. They practically ruined One Piece. So, the best choice is to go to the source of these shows: Japanese dubs. I'll admit, I liked Kirby and Pokemon. But 4Kids didn't do as good of a job as they could've with F-Zero.

F-Zero Falcon Densetsu (a.k.a. GP Legend) is a cool enough show in the Japanese dub. It goes into a little more detail, has better character development, and a cool story going on. Partially intended as a TV reboot, F-Zero may have slight differences from the games. However, that does not derive from the aforementioned qualities and it's notable great animation. The animators tried hard to make this look cool, and they never disappoint. The races are usually a little thrilling, and the character development helps bring more story to the show. Sure, it's no super-awesome chase scene like in carsploitation films, but it's got enough to keep you paying attention to some action, and a story. It could use a tiny bit of work, but nothing about the Japenese dub is "bad." It's just not a masterpiece. It's good, not amazing. However, it does please fans of the video games and it lasts for 51 episodes in the Japanese dub, and that keeps me busy.

If anyone's worried about similarities and differences between the games and the shows, that does not play much of a factor in the enjoyment of the show since many fans of F-Zero are pleased with it. I've been on F-Zero pages, and they like the show enough to translate it themselves on YT for people who want to watch all 51 Japanese episodes instead of the only 13 English dubbed episodes. 4Kids is lame.

F-Zero is no ultimate spectacle, but there's more than enough in the show to watch it. Likable, occasionally mysterious with a few great twists throughout (little or big, I'm not revealing any), F-Zero is mostly well-crafted, well-animated, and representative of the games enough to please fans.