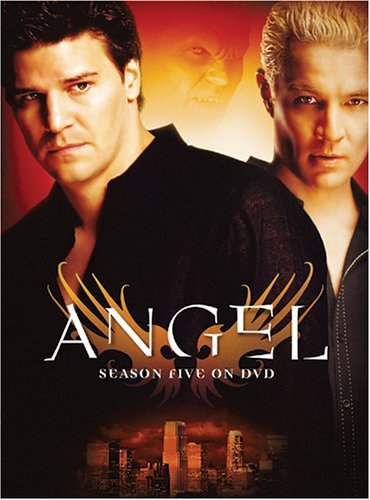 Fred faces technical and budgetary setbacks in her project to make Spike corporeal. Meanwhile, Spike is beset by grisly apparitions that only he can see.
Spike keeps disappearing into a hell dimension, the team tries to help, but they're distracted by ghosts. Spike discovers the source is a powerful ghost wizard who is tormenting Spike and Team Angel. They must find a way to defeat the ghost, but how do you defeat someone who is already dead?
HELLBOUND

The Good; Great villain, some great Spike stuff and an all round great premise

Best line; Angel (to frozen in time Pavayne) "Don't worry I had them give you a window"

Jeez, how did they get away with that? Gory as hell, how did this not get an 18 rating?

Subverting the cliché; Gunn and Wes always assumed Spike was going to hell

Captain Subtext; Apparently Spike materialises beside Gunn in the toilet and makes remarks about his penis. What sort of remarks? Claire suggests that Fred and she hold hands if Fred is lonely. Pavayne describes Spike as a 'Little Nancy still crying for his mother', well he's got the last bit right as 'Lies My Parents Told Me Proved'.

Questions and observations; Of course the term Reaper is another supernatural series and he too sends souls to hell. Mercedes McNab guest-starred and at one point the devil goes 'Ooohhh Buffy' when handing Sam a stake to recapture an evil soul who thinks she's a vampire (because there are no vampires in the Reaperverse). Spike refers to the King's English as he's seen 2 Queens in his time (Victoria and Elizabeth 2nd) and 4 kings (Edward 7th, George 5th, Edward 8th, George 6th). Spike calls Angel 'Liam', he knows his backstory. Angel likes Spike's poems, did he continue to write AFTER he became a vampire? Spike suspects that it may be the First Evil tormenting him which seems logical. Spike also says he's been a ghost for months which gives us some timeframe. Love to have seen Lee or some of the other casualties from WR&H over the years as Reaper's puppets. In many ways I think they try to cast Fred as the team glamour-puss but she doesn't really cut the mustard in that regard, Amy Acker a beautiful woman but just doesn't compare to CC, Buffy, Faith etc. Very Christian idea of hell. Eve is actually quite heroic here. Very little Lorne, he's really sidelined this season even if he's now a regular. The fate of Pavayne is very reminiscent of the fate of the 'Family of Blood' in the Dr Who ep of the same name (possibly the best ep ever?), both it and Torchwood drawing a LOT from Buffy and Angel (Angel sunk to the bottom of the ocean by his son, Capt Jack buried alive by his brother). So what happens to Pavayne AFTER the fall of WR&H at the end of the season? When Pavayne says that 'There's hope for you yet boy' when Spike has the choice of being human or rescuing Fred does he mean good Spike or evil Spike? Presumably Fred told Spike about Angel's Manilow obsession?

Marks out of 10; 9/10 very strong ep, great villain, truly creepy and excellent performance from JM Let me begin by saying that no one "dies" saving the world and then gets sent to hell. No way am I buying that. In fact, I don't see why vampires deserved to go to hell at all, since they don't have souls. How can anyone be blamed for something that happened when a demon was inside their body? It's like blaming Cordy for Jasmine. Once Spike and Angel got their souls back, I think they should be right back to where they were standing sin-wise, when they were sired and lost their souls in the first place. Plus, redemption isn't about evening out the number of people saved vs. the number of victims you've killed. It's about feeling remorse and trying to do good, even when you don't have to. It's about forgiveness. I think that's Angel biggest problem: He can never forgive himself. He can forgive everyone else (Wes, Darla, Conner, Faith...) and he even help them see the good inside of themselves. But he can't let go of his own past and it weighs on him every day. Honestly, this is an excellent episode that highlights Angel's feelings and cures Spike vanishing into hell problem. I highly recommend it.

"Hell Bound" revolves around Spike. He's being sucked into hell, he's being haunted by other ghosts, and something called The Reaper is after him. While Fred works on a way to re-corporealize him, Spike does what he always does in times of trouble... He goes to Angel and picks a fight. Angel is more than willing to share his own gloomy views of their afterlives. He says that both he and Spike will wind up in hell. Spike is unhappy with that idea and he becomes even less happy when Team Angel stops being able to see him.

It turns out that Wolfram & Hart is haunted by a 18th century serial killer named Pavane, who stays out of hell by pushing other ghosts in. Spike is his next victim, but Spike's not going without a fight. (I especially like him shouting at the ghosts that he wants to see Pavane and not his "flunkies." It's the exact same phrase Angelus used back in season four. I think a lot of Spike's tough guy talk is just stuff he's learned from his grandsire.) Anyway, Fred finds a way to re-corporealize Spike. Before they can use it though, Pavane attacks Fred. Spike shoves Pavane into the corporealizing machine to save her and so Team Angel can capture Pavane. But that leaves Spike a ghost.

There are some good parts to this episode. I like how hard Fred is trying to help Spike. When Angel asks her why she's doing all this she says. "Because it's the right thing to do." That sort of Champion-thinking is fading at Wolfram & Hart. Also, I think the ghosts haunting Spike are really creepy, but also sad. Pavane got what he deserved after sending them all to hell. And when Team Angel does the séance, I always end up smiling at how bored Angel and Wes look... But still they sit there. Finally, I love Angel being listed in 4 of the "Dark Soul" entries in that book.

On the down side, Fred seems to think that Spike is flirting with her in order to get her help. I disagree. It's not manipulation. Spike's just like that with women. Heck, he even flirted with the ghosts haunting him, calling the crazy, chanting, armless one "Love."

Like I said, I just don't believe that Spike and Angel would go to hell, though. (Especially not poor Angel, for goodness sake! He's practically a vampire saint.) I think that Pavane tricking people who THINK they DESERVE hell into going in his place. That's why when Spike suddenly took control down in the basement, the portal to hell disappeared. Because it was a trick to get people to surrender. Pavane even says something like he's choosing "dirty souls" who know they've sinned to take the trip. He's trying to make Spike feel the weight of his soul by bring up his past crimes. He mentions Spike's mother (who Spike feels guilty about siring) and tells Spike that his soul's all stained with red or something (which could be either from Spike's victims' blood or from the BTVS season six episode "Seeing Red," depending on how you want to read it. Personally, I'm going with the "Seeing Red" interpretation because it opens up a cool new subtext of how Spike only got his soul in an effort to win back Buffy, not because he wanted deep spiritual redemption. But I digress...) Anyway, if Pavane can convince people that they deserve hell, than he can manipulate them into taking his spot for awhile. Their own guilt helps send them there, which is why he said that Spike's conscious would weigh him down. It's also why he can't just open another portal during his fight with Spike and suck him into hell against his will. Spike has to give up or it won't work.

My favorite part of the episode: Angel and Spike sitting side by side on the couch bickering about which of them dislikes the other more. Finally Angel mutters, "I did like your poetry" and Spike retorts, "You like Barry Manilow." Not only are they really funny and cute together, but the scene also tells me two new things about their past. (1) Spike kept writing his terrible, sappy poems even after he became a soulless vampire. Which kinna ruins his evil image and make me smile because it's just so... Spike. (2) Spike and Angel must have hung out together in the past 30 years or so and discussed Barry Manilow songs together. I'm curious to know what they were doing and where they were when that happened. I wish we'd had a flash back.