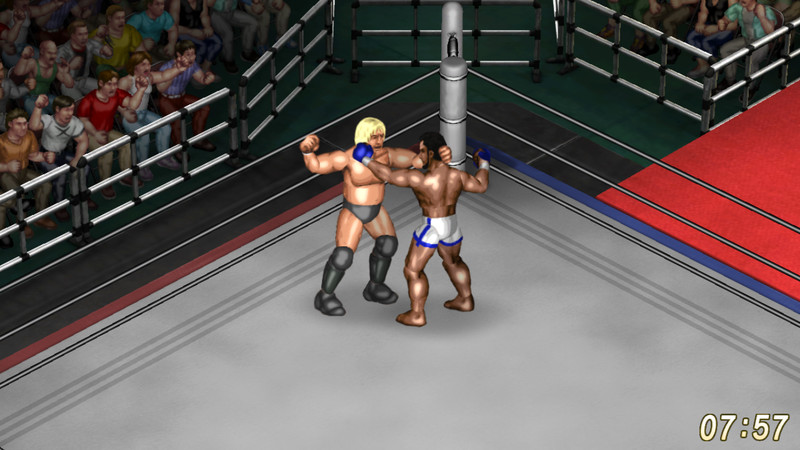 All Spike Chunsoft revenue will be donated to TAKAYAMANIA, a foundation established to help support Mr. Takayama and his family.
Mr. Takayama was paralyzed from the neck down from a wrestling accident during a match on May 4, 2017. b4d347fde0


This game is not without its flaws, but this is overall the greatest wrestling video game of all time.
-Insanely in-depth edit making is possible here, amazing guides exist by long time fans that can help you get the most out of the custom logic and detailed guides on how to make your favorite wrestlers\/celebrities\/your own creations\/etc, I personally have learned so much from some of those guides
-Improvements over FPWR, including many fixes to fatal flaws in Returns' gameplay
-A great Workshop that is basically a monument to the greatest FPWW creators and their masterpieces
-DLC that adds game modes, moves, and badly needed edit parts
-A very toxic but very talented modding community that has added some much needed, incredible additions to the game that Spike Chunsoft probably doesn't have the time or budget to officially ever get to. The real problem there is that if you have issues, the mod creator will only help you if he feels like it, or deems you 'worthy' of his assistance...the dangers of using mods for any game though. Except it has been admitted by him(in recent threads no less) that some of his mods are managing to affect non-modded users in regards to the Steam Workshop. Perhaps Valve themselves should step in and police this if Spike will not?

Speaking of the mod community...to those on the fence about buying, please try to ignore most of the negative reviews brought about by the lead mod creator(not affiliated with Spike) of FPWW 'Cunzilla' and his pedo followers (their old website 'Arena' literally had a pedo operation behind the scenes shut down by FBI, something they all tried to hide from the general public before they were exposed by a buzzfeed writer) who justify their actions with an admitted agenda to tank the game's sales. Their logic being that if Spike Chunsoft stops working on it, they can mod it without the devs periodically updating their game and screwing up mod 'coding'. Despite that group and their cult-like devotion to some angry nobody clearly on the spectrum that spends over 5000 hours of his time 'modding' this game despite having a supposed education, family, and an obviously special needs child...there are still the long time true fans of this game that enjoy this latest installment for what it is and applaud the devs for their efforts here in re-animating a franchise we all thought was dead forever. While the mods do add some great things, the positives are greatly poisoned by the fact that the creators of those mods have used Steam forums as well as their own forums elsewhere to taunt, harass, and terrorize the actual devs and those who support them. It's a pathetic, toxic, vile group, and a shame so much talent lies in the hands of those with such a deep lack of character and obvious self hatred.

**update 4-30-19: An open letter to CZ and 'View69er': Thanks for reading and flagging my previous review View69er, but you missed the other 3. To be fair, it had to be difficult to see the screen while you typed your plea to Steam with your tongue so far up Cunzilla's hole. And as you both already know...I have never messed with you and your friend's live streams or posted any bad stuff on your discords. Now granted, it's no secret how much I deeply despise you and your pedo buddies...your bullying, hypocritical, immoral ways have made me sick for years now, but there's apparently people out there that ACTUALLY hate you guys(perhaps that should worry you both, looks like you two have made enemies with some very disturbing folks over time if the forums are any indication). I myself don't have the energy or desire to waste time with endless forum sniping with you guys outside of this Steam review, and it only takes me a few minutes to type this. It does get old to be accused of secretly being every single random username that has a beef with you, and it looks like they are many. And obviously some are the both of you stirring up fake conflict, posting fake accts in your own discord to make it look like 'IT'SRMP'. Why do you think I'm so dangerous to you guys? In reality, I'm not, I'm just a guy who released some as you describe 'crappy edits' years ago(but you still use them for some reason), and I have the guts to stand up to you, I don't use your mods and don't care if you ban my user ID in your coding. Why keep my name alive in the FPWW community? Maybe 10 people remember who I am? I only made edits in the first 3 months of the game. So needless to say, it's perplexing to see you all stalk me and constantly type my name every day in your Discord(yep I lurk, despite your scummy convos, you guys sometimes drop valuable FPWW info from time to time so I check in. Good luck finding out who I am but I've released a few edit parts you all I bet have used, and no I don't need to use your custom parts mod. I simply overwrite existing part IDs I dont use w Unity..which could solve some people's memory issues your custom parts mod has if you'd only tell people abt the alternate method). Once again, I'm not going to waste any more of my time directly addressing you guys in forums no matter HOW hard you try to bait. I've already exposed you guys to the devs and the world, and more than enough people have seen it and know what you guys really are. They only need look at your Discord comments most days to see who\/what you really are. Im sure the devs know what you guys had going on at Arena too, before the FBI shut it down and hit your patsy.

And to let you in on a little secret, a few of your close buddies in your discord\/CC actually know me well enough to know I'm not responsible for the stuff you all have accused me of(2 in particular post every day in your discord and play along w the narrative for fun lol), it's amusing in a disturbing way though. Apparently I'm the 'baba yaga\/boogyman' of your little Fire Pro Community. How do either of you have the time? Maybe instead of hate, go outside, enjoy 'real life'. Maybe spend actual time with your family or something, go get a job maybe to support that family instead of begging for money from the community. This game shouldn't be your life. In closing, I used to post things saying the most outrageous stuff, knowing you guys would jump on it no matter how obviously silly it was lol, I don't even bother anymore and haven't for some time. You guys are like the one neighborhood dog we all see that runs after EVERY car that drives by. It stopped being fun for me to poke at you guys over a year ago when it was clear how ill you guys are. Feel free to spend the next month of your time dissecting my review here in your discord, with your impotent anger and empty threats like always.
It's sad that you both are such big reps of this game, it's got to make the devs sick to see it. They probably can't wait to be rid of the game, and never know of the likes of you ever again. Such a shame out of a dev team that started out communicating so much with us and was so excited, only to get to where we are now, and its obvious as to why.
In the beginning, the devs were committed to giving us ANYTHING we wanted in this final installment of FPW, including edit tools for parts\/moves, they even said that they planned to. But instead, they lumped ALL of us FPW fans into being garbage and not worth the extra time\/effort, all because of you and your friend's toxic, horribly negative interactions with them over the last 2 years. It's not mods that ruined this game or its potential, it was you and your actions.**. My only regret - not buying it on release day.