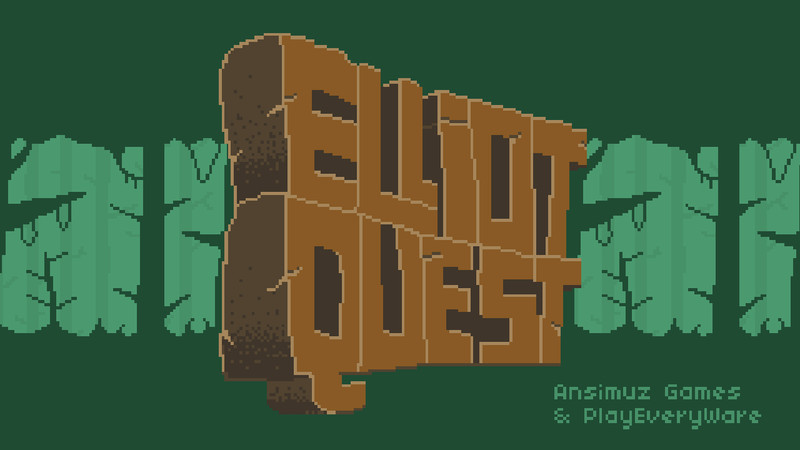 Elliot can’t die—but he’s still running out of time. In Elliot Quest, the victim of a rare curse must find a cure before he’s transformed into a demon.

After Elliot’s wife disappears, he falls sick and attempts to take his own life--only to discovers that he can’t die. Plagued by nightmares and growing weaker by the day, Elliot seeks out a local Sage, who tells him that he’s the victim of a rare curse. A demon called a Satar is slowly consuming Elliot’s vitality.

If Elliot can’t find a cure to the curse before it’s too late, he will become a Satar. His only hope is to ask for the help of one of the island’s Guardians, who have kept the Satar from taking over Urele. Elliot can’t die—but he’s still running out of time.

Elliot Quest is an adventure/RPG where players explore the mysterious Urele island in search of an ancient demon. With 5 dungeons to conquer, 16 bosses to defeat, and countless treasures to discover and hidden areas. Well-balanced gameplay easy to pick up but challenging to master. 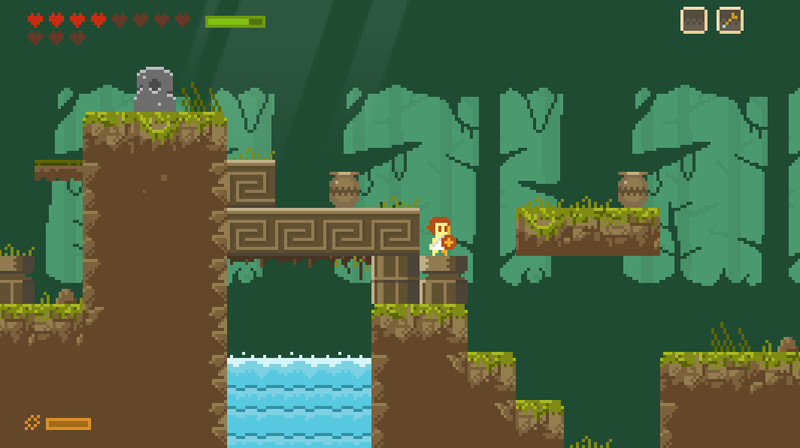 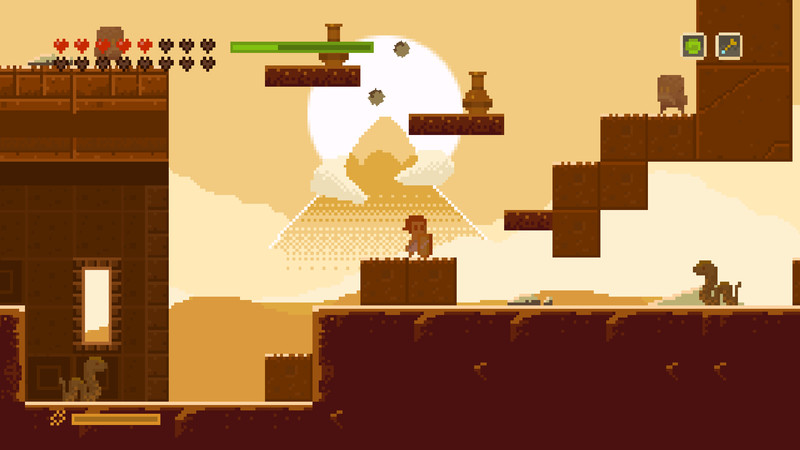 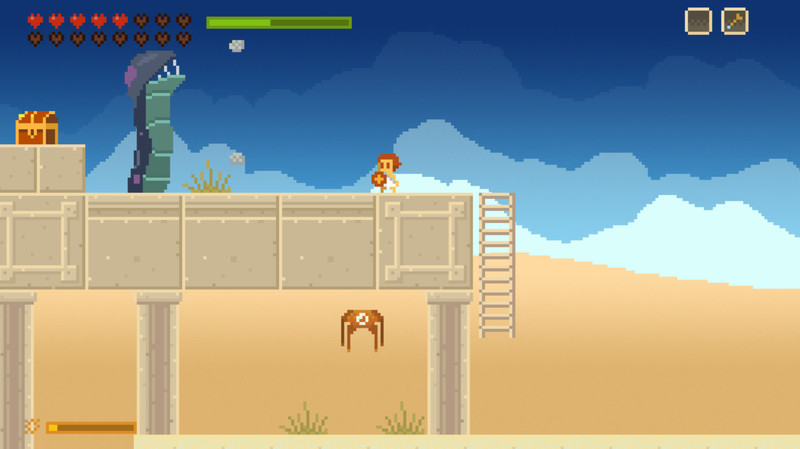 
Elliot Quest makes it no secret that it wants to be like a number of classic NES-era gems.

It accomplishes its goal extremely well.

I'm a big fan of the Metroidvania genre, and Elliot Quest delivers. Apart from discovering new areas to explore, it's deeply satifying to find alternate uses and effects for the items/spells you collect. Not just as a puzzle soliving element, but also the way certain spells will completely overpower certain enemy types (fire on a blue slime~).

Visually, it does a great job with pixel graphics. More specifically, it does a fantastic job with colors! The palette range is varied, giving each and every area a unique feel from the others. Off the top of my head, I can't think of any color that isn't used in full array.

This isn't to say it's without flaws - there's the occasional glitchy moment or questionable game design, and the story is so loosely presented that it feels like nothing more than a means to progress the action.

However, these errors are far and few between. At the time of writing, this game is an absolute steal at %50 off. Even at full price, it's more than worth it.

And in classic NES fashion. You might want to make notes and sketch out your own map~. This game is horribly underrated and deserves a lot more praise and attention that it gets as this is made what seems to be one person entirely.

With all the nostalgic refrences littered in the game and the design as well as level flow that is very similar to the NES hard 8-bit days, nobody who this developer inteded and made this game for would complain about it's shortcomings (which it's shortcomings are not of a technical or gameplay nature, but more of the opinion of somone who wouldn't appreciate the overall low-fi quality of the game or the ambiguous way the game unfolds); the only people who I can see wouldn't appreciate this understated masterpiece is someone who never actually lived the NES days and played games like Zelda 2 or the original Metroid and beat them in the 80s, so for those of us who have very fond memories of those days will feel right at home with this gem.

Pros:
- Engaging gameplay and very well thought out Metroid style level design and ability acquisition
- Variety of enviornments and enemy types
- New Game + mode with extra difficulty
- Tons of opptional collectibles and secrets that I still haven't found
- Optional extra hard dungeon for the completionists out there
- Vague nuanced story that is wide open for interpertation

Cons:
- Doesn't give much direction on where or what to do
- Level cap system is low and comes as a surprise if you haven't specd your character correctly
- Vague nuanced story that is wide open for interpertation (I put this here because some people hate this style of story telling)

At the end of the day, if you stumbled on this page and are considering this game it's probably because you would enjoy it; it's a shame that I have never seen this advertised or recomended anywhere and I personally bought this game in early 2015 after scouring the internet for Metroidvania titles to hold me over till I found my next obsession and since I have never seen this come up on Steam's main page or seen any major publications praise this game despite SOOOO many of the games I own, play, and research are similar to this.. Context: at time of review, 10 hours in. just at the 3rd dungeon. Spending most of my time trying to hunt down the various secrets/powerups I can get to w/ my current kit.

A Fun but Very Hard metroidvaina, which takes a lot of cues primarily from Zelda. LOTS of secrets & powerups to hunt down, although most of the majority of them are just gold drops.

There is a leveling system, where ea. level you allocate a point to strength (range), wisdom (magic), vitality (health), agility (fire rate/move speed), or accuracy (random crit chance). Game works on a save point system, die or quit & you restart at the last save point you touched. the Savepoints give you a base amount of hearts/mana... and the only drawback to dying is you lose current xp to next level. Developers obviously expected you to die somewhat frequently, and then retry ala platformers like VVVVVV.

There is also a morality system, based on a limited set of choices you make thru the game (save this kid, partner with this evil guy, do/don't rob this temple). It's pretty low key though; and you can pretty much ignore it for the most part.

The game is light on explaining its mechanics, while the basic function of most of the items is pretty straightforward, you'll need to experiment a bit to figure out everything they can do. That could be a plus or a minus, depending on your preference, if you hated Dark Souls cryptic item descriptions, you might hate Elliot Quest's lack of almost any direction too.

Graphics are obvious retro-pixely, but they're clean and attractive looking. Think classic NES style, but with more detail. Music is ok, but not spectacular and the 1st level is a very obvious rip off of a Zelda theme.

Bottom line, if you like metroidvanias and don't mind a bit of a challenge, give it a go.. This is a very good action-adventure game, it has a great amount of exploring(very similar to Metroid), Zelda-like dungeons (but in side-scroller format), good puzzles, nice art and fun battles.
Elliot Quest has everything of a good action-adventure game.. My real name is Elliott and I have red hair IRL. 11/10. Fun little retro-feel game. Not a whole lot of direction from the game or controls, however it was simple to figure out on my own. The music is fun and game overall looks really good. The game was not laggy and controlled very well.. This game has terrible controls and rips off Zelda sound effects and music left and right. The game is trying to be a Zelda 2 clone which I guess in that regard it actually does a decent job.

If you really loved Zelda 2 or wish to play frustratingly hard game from the NES era then maybe this game is for you… but for anyone else not so much.

I couldn’t stomach the game for longer than the min review time. The sprite art work is pretty good and the music is mediocre. Like I said if you are looking for a NES style game or a Zelda 2 clone then this is your game.
. Fun little zelda II kind of game! Sidescrolling platformer levels with an overworld map that links them. Secrets and treasures to discover, tools to collect, and bosses to fight. Music and graphics are nice too! Loved it, and the price is right.. I want to like this game, but I can't. It has nothing to do with the presentation or story, but with how horribly broken it is. Maybe this only affects the linux version, but the controls consist of spacebar, directional keys and D, with no way at all to change it. This is simply not a control scheme that works. Controller support is also almost entirely lacking, with only a handful of keys mapped to my logitech pad, not including movement, and again, no configuration at all. There isn't even a way to display it fullscreen. Sorry, but this gets a thumbs down from me until it gets fixed.