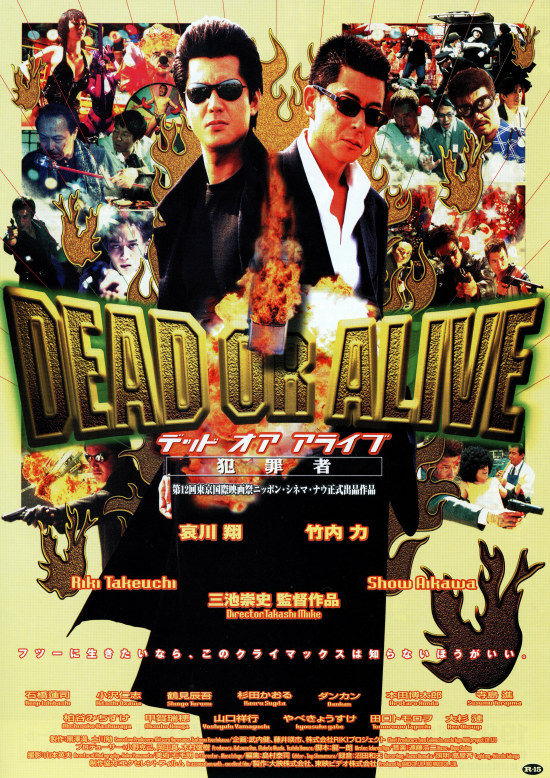 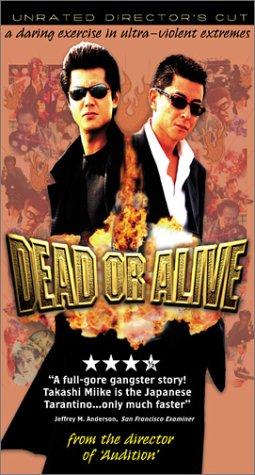 A yakuza of Chinese descent and a Japanese cop each wage their own war against the Japanese mafia. But they are destined to meet. Their encounter will change the world.
In Japan, after a massacre of Japanese and Chinese gangsters, the tough and persistent Detective Jojima is in charge of the investigations, while dealing with a personal family problem. His daughter needs to be submitted to a surgery and he needs to raise twenty millions yens urgently. He finds that the Chinese descendant Ryuichi has associated to a Taiwanese drug dealer and is eliminating the competition. In the end, their confrontation becomes a personal issue for both.
The first in a trilogy (with the three films being linked through theme rather than story), helmed by the maverick-badboy-powerhouse- extraordinaire-director Takashi Miike, wrestling this great cinematic apocalypse of a gangster film with seeming ease. Miike is one of the most prolific directors working today with a cinematic output of 50 films in 10 years. The difference between him and someone like Quentin Tarantino is that whilst QT gives us one film every third year or so, with each of them being meticulously crafted from a great mountain of gold, Miike shits out flawed cinematic gems three times a year. In 1999 he made Audition, DOA and Ley lines. All of them are terrific with Audition being a flawless masterpiece.

This Miike gem boasts, what one could easily argue to be, an opening and ending greater than any other openings and endings of any other films. The opening is a nearly 7 minute non-stop roller-coaster of drugs, corpses, strippers, hookers, assassins, gay sex, gore and an exploding belly filled with noodles - all scenes being energized by an awesome soundtrack, constantly pushing unconfined adrenaline through the screen, into our minds. In the midst of all this ongoing chaos we are being told a number of different narratives, setting up mood, atmosphere and theme. The ending is, just as the opening, mind-numbingly great. It is more unpredictable than the ending of Paul Thomas Anderson's Magnolia (released the same year) with what I would say being very similar to DOA concerning reason and effect. We follow the two Miike regulars as the two lead characters of the film - Riki Takeuchi as the violent gangster Ryuuichi faced up against Shô Aikawa as Detective Jojima. Any further explanation of the plot is in not needed since the film is not about plot, nor is it about characters, it is about whatever an uber experimental, taboo breaking, mad, avant- garde genius is willing to fill the screen with. Rootlessness, homosexuality and boring stretches of not much happening are only some of Miike's trademarks, making their mark in what is one of his most (if not his most) Miike-esque films. A lot of the scenes are not to be taken literally since they are exaggerated metaphors. Though, you could take them as they are, making the film funny and insane instead of earthshakingly beautiful and profound. The more you bring to it the more you shall receive. Reminds me of Alejandro Jodorowsky's take on his own film El Topo: "If you are great, El Topo is a great picture. If you are limited, El Topo is limited".

For those who hate the film I think the great critic Elvis Mitchell put it best when he called it "a soulless compilation of cheap thrills." In his review of Audition he writes: "His most recent film, Dead or Alive, was a crime drama catalog of shock effects by a man capable of showy and empty gestures, all reflexes. This film is the polar opposite, where every note is thought through and worked out."

I think that there is more to the film than what Mr Mitchell makes of it. Most Miike films tend to get boring only to wake you up with something utterly out of this world bizarre and/or breathtaking scenes of extraordinary beauty. So the films of his that are not exclusively story driven or expertly paced are not meant to be taken as such. You are meant to immerse yourself in the world that he has created, be it a boring scene or an eventful one.

It's an experience where you are being given the opportunity to watch all of the conventional cinema get clinically destroyed, left for dead, re-assembled, shuffled around, stepped on, burned up, eaten up, turned into excrement, used as fertilizer - giving a beautiful flower of transcendent cinema the strength to flourish, putting said flower on a podium only to be misunderstood by people who were expecting something easy to digest over night. Miike doesn't do easy nor does he do conventional. He makes self indulgent silliness mixed with hardcore art-house-exploitation. Always intelligent, always witty (mostly dry) and never afraid with a camera.

The film is brilliant and as always with Miike, extremely polarizing. Even if you were to hate it I'd be surprised if you were to regret having seen it and even further surprised should I find out that you wouldn't want to check out some of his films in what is an overall outstanding oeuvre.

Miike is my favorite director of all time (so I'm biased, but whatever you think of most of his films, Audition is still a masterpiece) and if I haven't convinced you to go see this piece of his I'll make one last try with a quote from the great Miike analyst, author of Agitator – The cinema of Takashi Miike. "I'd met Japanese director Makoto Shinozaki (who wrote the foreword to my book) during the festival and he recommended I should go see Dead or Alive, because, and I quote: 'The last ten minutes will kill your mind.' That was no lie, because I haven't been the same since." - Tom Mes.

No lie, upon watching this film, your mind will die. In a good or in a bad way, I say who cares? at least you watched something challenging, and that is always worthy of praise.

9/10 Directed by Japan's newest phenom, Miike Takashi, DEAD OR ALIVE is the story of two hitmen looking to make one final score in order to financially assist family members. Director Takashi took a half-baked action script as a dare to do something fresh with it.

Takashi pulls out a lot of visual tricks, but I found most of them to be pretentious, confusing and distracting. (Kind of like the people who can't stand Guy Ritchie.) He's so over-determined to be different and to shock you that there's noting left to root for. The most acclaimed aspects of the film are its first and last 10 minutes. The first 10 (a series of executions intercut with a striptease) are shockingly graphic, but it feels like exploitation, not refreshing ideas. Everything feels cheap and dirty and the editing style is obnoxious. The final 10 goes ridiculously over the top, but again does so only to prove that it can. There are some good moments but overall it's highly underwhelming. While the whole is diverting, the ending's utter repudiation of reality seems like pissing on the audience; -- we feel like we've been suckers for bothering to care about the characters at all.
In the US an edited R-Rated version was released alongside the uncensored Unrated version.