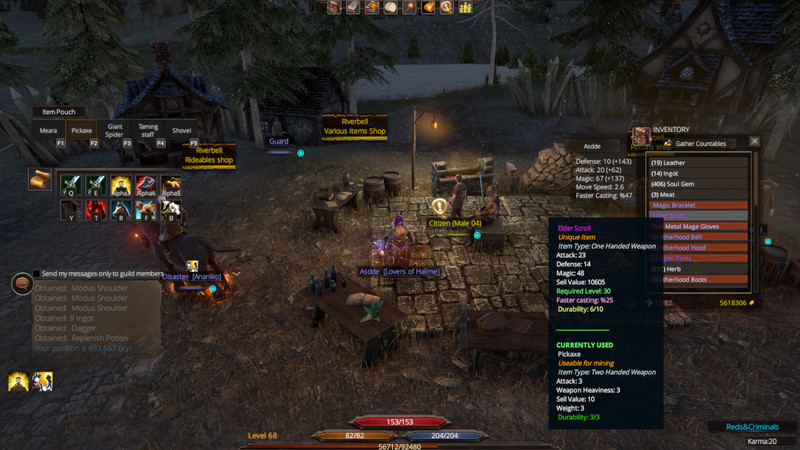 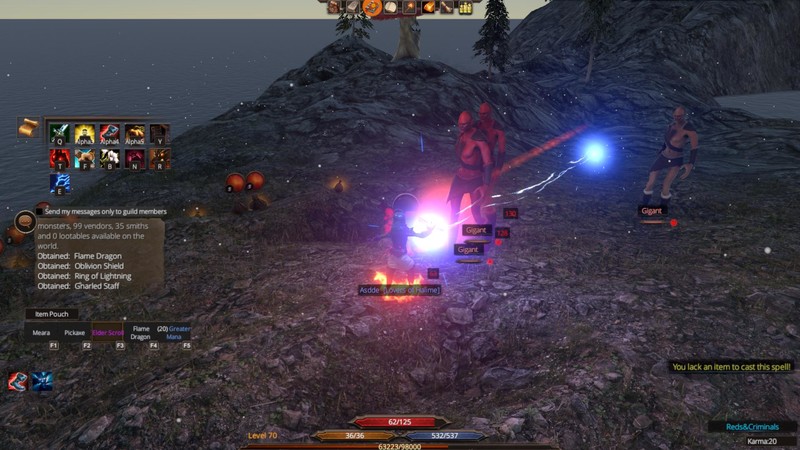 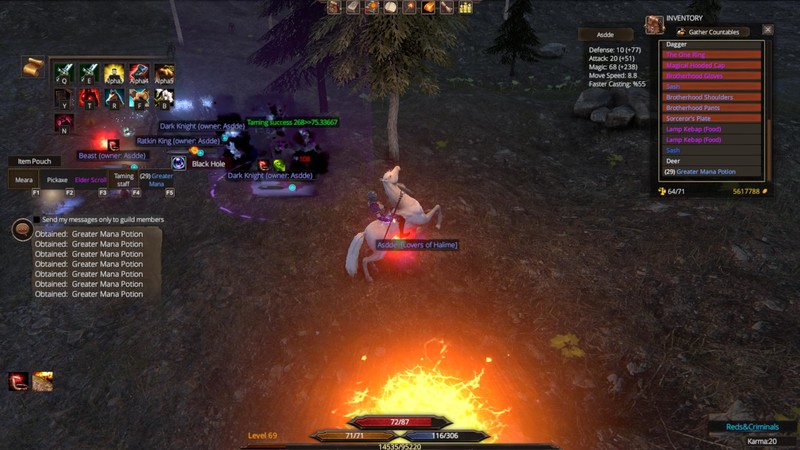 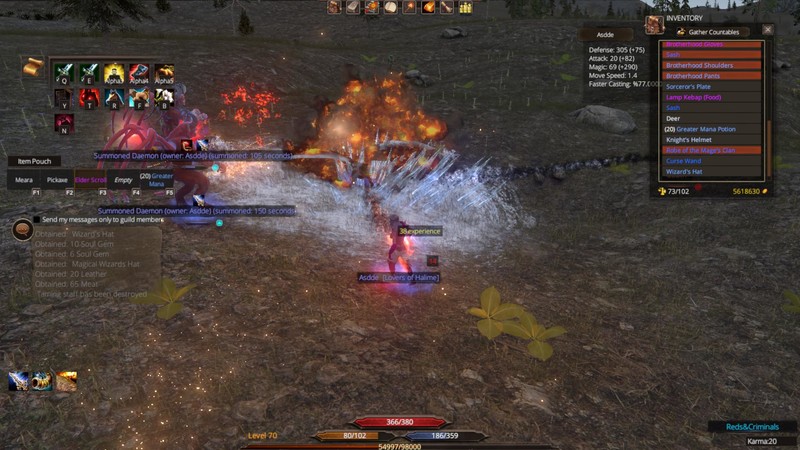 Before saying anything about the game i must note that the game seems to be still in early alpha state of development.
if i can describe the game in one sentence i would say "full of bugs and lack of several key features".

Pros
Big zone to explore (i ssume there will be more in the future or this is just the first island)
Lot of equipment items
Lot of mounts
Open skill choice (you can chose to use any skill starting at level 1)
It seems they are giving you the power to name the map zones (runebook)
It feels nice just go and kill whatever you find (you found a turtle? go ahead, kill it, it may drop a dark lizard mount if you are lucky)
The game is still on development

Cons
The battle system is not good enogh (or maybe not good at all depending on the player)
There is no map so you have no idea where you are and how to find things
Really hard to find out how dangerous is an enemy (usually the level is not displayed)
Server disconnection (i got disconnected several time god knows why because is not my ISP)
The interface is really bad (and i am being nice about it)
Is not sandbox but either have something to follow (no story, literaly the quests mentions you as a hero, god knows why, and expect you to kill or collect something or both, and usually they are bugged and are unable to complete)
No ingame bug report system making even harder to colaborate.
Almost no players (should be fun to play with friends)
Could be more but i cant remember everything i saw

The game is not expensive, you could try it without espending lots of money like many other games, so if you have doubts about the game just try it and if you dont like it remember that steam lets you get your money back before the first 2 hours of gaming or 2 weeks of buying.

Hope this help you decide.

EDIT:
After some more hours of gameplay I finally finished exploring the entire map, it is not huge, is not even big, could fell big at the beginning but is really small, most of the land is empty, no monsters, no trees or something else.
Found a "secret" location (you can only access through the (I think) only usable door\/portal in the game, inside was an enemy named "Satan" and it was impossible to kill for me at level 70. It was kind of disappointing, I was hoping to find a portal to another place or something, maybe I need to kill Satan first.

Anyway, I recommend the game only because it could be better in the future.. Great game for it's price. Vast lands to explore, monsters to see, lots of skills, cominations and some different options.
I do think that this game offeres lots of potential.

<-Pros->
#New MMORPG game to explore.
#Very cheap to try it out.
#Ability to affect the product and help to find some issues.
#Lots of items and effects, many skills and cool features to try.
#Huge and vast map.
#Can host own servers.
#Global ranked server.
#Pvp, although I haven't tried it yet.

<-Cons->
#Still in early access, yet you can contribute to the project to help it grow.
#Still lacks some features that help you want to explore more lands.
#Need more players so the vast map can be fun, because the current npc system doesn't make up for that space.

In this state, I found myself to actually enjoy this game, it's very unique.

Currently, there are many changes that can be made, such as the tree rendering distance, I find that on ultra graphics, I still see too little of the details further away. Maybe put it a step up? Like Ultra-high or something.

Also, the main problem I have with this game is the exploration, exploring is a pain because you're gonna have trouble getting to areas because of the character stopping at areas. Also, the characters cannot drop. You can't fall at all, so trying to fall, you won't be allowed to do that. Trying to go down a mountain? You can't do that, you have to go around, through the enemies.

The last problem is night, Night looks very very bad. Change the sky from brown to black, also while on a ship, the islands look very blue-ish, change this too.
Honestly, the lag is the last of my issues. At this stage, I'm still having a VERY fun time on this game, I find it a great time wasting tool, just focus on what I've said, and your game could outstand many others on early access.

I'm recommending this mainly because of the cheap price, if it were $10 - $20 I'd probably say no. But at this price it's worth it, get some more work done, and maybe it could be worth around $20, I hope this helped.

CONS:
Small community
No narrative
Graphics aren't all that great. (Not the worst mind you, could be better however)
Can't talk to NPCs
Bugs aplenty

6\/10
Eh. The game will get better as it grows.. Bought this game back when it cost something. Server always ran badly and the only active players were PvPers. The game itself is really bad but if you can endure the bad gameplay you'll be entertained for a few hours maybe. The developer started a new game, turned off the servers and made this one free with local servers. I will never purchase from this developer again.. I'm on an azerty keyboard.
I can't even rebind the keys.
I couldn't go any further.. Game has decent mechanics, it allows for some pretty good build customization. Taming in particular is quite nice. The world is a bit sparse though at the moment.

I don't particularly care for this type of open world pking, fortunately there aren't many people on since you're pretty much guaranteed to be jumped by higher levels as soon as your newbie protection wears off. This is only problematic since gear permanently breaks after losing durability and there's no way to repair them yet. For some though I guess this could be a plus instead. It's not for me though so I won't be recommending it.. Very good start to a MMO, you pick your own skills want to advance in, magic or combat stuff, its your pick. each level up, you get a point to put into what you like, Stats atm, are raised defaut, but is lots of bonus weapons to aid you in your stats needed. i went as a mage\/healer, and its been fun so far. give game a try, you wont be sad. well worth the cost they asking.