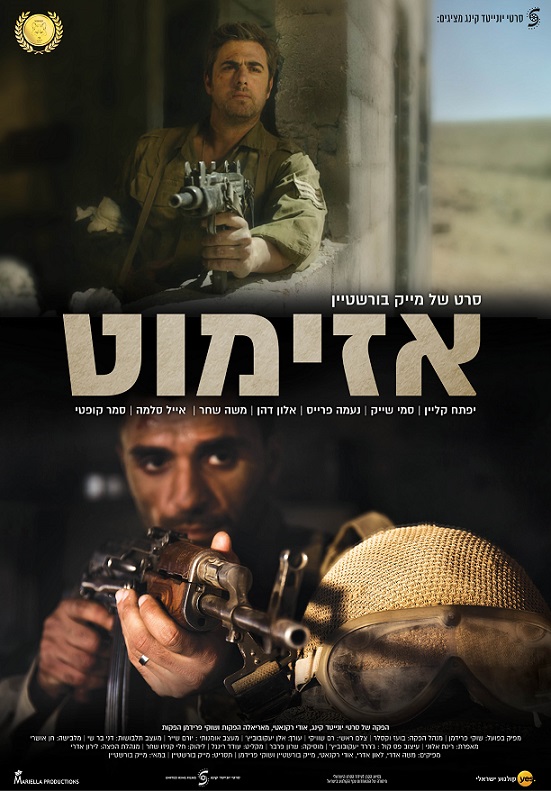 At the end of The Six Day War of 1967, two soldiers, an Egyptian and an Israeli, encounter each other in the Sinai desert. Two soldiers - one goal: Survival.
Richard Stellar The Wrap August 22, 2017

It was the 'summer of love' in 1967 when Israel repelled a concerted effort of its Arab neighbors to drive it into the sea. What took Moses a generation to achieve was about to be ripped apart by a blistering phalanx of artillery, air power and troops. It was an ambush. A 50 to 1 imbalance putting Israel into a role it's grown accustomed to. This time, the underdog served the combined armies of Egypt, Syria and Jordan a stunning 'David vs. Goliath' defeat. In 6 days Goliath was brought to his knees. Had God planned this war, he would have reserved the 7th day for a day of rest. If God had made a movie of it, it might look like Azimuth.

The movie was made, but not by the almighty –the son of Yiddish actors, who got his start in Yiddish theater took on the task, and at 71 years old, his first foray into directing yielded a movie that should be a precursor to every diplomatic mission to the middle east.

Azimuth, directed by Mike Burstyn exposes conflict and salvation as it communicates itself between two soldiers: an Israeli and an Egyptian – deadlocked in an abandoned UN outpost, during the ceasefire that ended the 6 Day War.

"Azimuth" is not a war movie. It is more like a dance – a pas de deux in time to the staccato riffs by Messrs. Uzi and Kalishnakov. The final scene seeps into your consciousness. When asked how he directed that scene, Mike claimed it was 'beshert' – a word that means 'destined'. In those final seconds, the movie combines cinematography with divine intervention, and makes it all look real.

"The metaphor is that at the end, the whole idea that we can survive is that we cooperate, or we are going to die in the desert."

I pondered what Mike was saying. An American could not make this film. There was a certain yiddishkeit that was both damning and forgiving of the world, and it glistened in this movie. I remembered it with the kvetching and moaning of my parents. Complain that you had no shoes until you saw a man that had no feet – a question of relativity that Burstyn uses as the subtext that escapes its subjugation and envelops the audience in empathy. You care for both characters, because in their isolation it's difficult to remember who they are fighting and what for. It becomes about two men, who fight for all of us.

Burstyn's professional career recently saw him play a Rabbi in Tzion Baruch's 'Juda', an Israeli vampire dark comedy that is playing to rave reviews in Israel that hail it as 'fun, trashy and entertaining'. Hardly a vehicle for an entertainer who got his come-uppance playing borscht-belt nightclubs.

But that seems to be Mike's modus operandi – go for what is unfamiliar and turn it into art. For Burstyn, his grasp has extended his reach for most of his professional life. However, how did this storied career that included live theatre, cinema, his own Dutch television variety show, and the winner of two Israeli 'Oscars' for his screen portrayal of Kuni Lemi (an Israeli Forrest Gump) prepare him to write, co-produce, cast and direct his first feature film at the age of 71?

"The 6-Day War changed the middle east, it changed the world, and at 71, it changed me. I didn't think I was mature enough to direct, but I had this story that I decided to do something with. I wrote a first draft and showed it to my neighbor who knew what she was talking about. She said 'it was amazing', and thought that the first draft was enough to submit to an investor."

I asked what the investor's reaction was.

"He said 'Mike, this is something that we have to do. It's a message that we need to get out to the world, it's a message of hope'. When you ask 'what is this movie about?', it's about 'hope'. This movie is about hope."

It dawned on me why the UN outpost was abandoned. With the 50th anniversary of the war approaching, the metaphor of that abandoned outpost was relevant. When it comes to Israel, the UN is an absentee parent out on a bender. Mike Burstyn might think the movie is about hope, and to those who live in Israel with a gas mask within reach and the steps to the nearest bomb shelter part of muscle-memory, then yeah – I can see that. What is beautiful about art like 'Azimuth' is that it may indeed be as Mike described it, but doves do not fly out of exploding grenades. Azimuth bleeds for humanity

Azimuth, written and directed by Mike Burstyn. Starring Yiftach Klein and Sammy Sheik. Score by Sharon Farber. For Azimuth, the obvious comparison is 1968's Hell in the Pacific, which was about an American soldier and a Japanese soldier stranded together in the context of World War II. The big difference is that the conflict that frames Azimuth-- the Arab–Israeli conflict-- is still going on, so that a certain tether keeps the story from taking up full residence in the realm of fable. Some distancing is achieved, though, by the use of music that carries the sound of a previous cinematic generation. The credits mentioned Rachmaninoff.

Unlike the opposing soldiers of Hell in the Pacific, those of Azimuth quickly discover that they can communicate well in English. It could happen, but it's a little unlikely. More unlikely is their almost cartoon-like ability to weather hostile fire and endure pain through much of the movie. But if you suspend disbelief, you can enjoy some fine acting, especially by Sammy Sheik, and a suspenseful time. (How much time the events take is uncertain, but apparently it's intended to be not much more than the screen time.) Although the message is a familiar one, the audience is kept guessing as to how it will be punctuated.