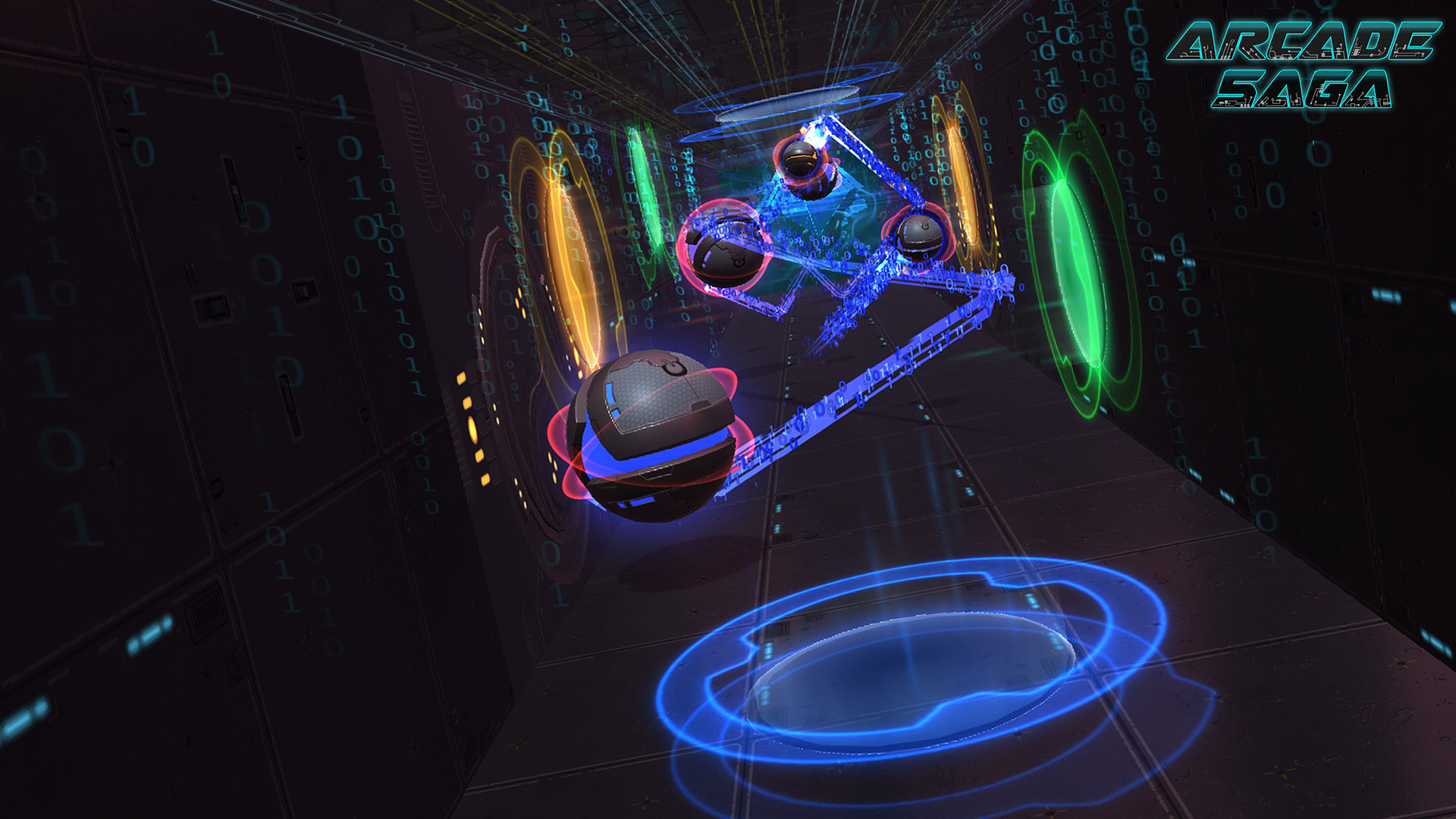 Can you take down all 4 bosses, across all difficulty modes? Or try your hand at PvP to see where you rank in the worldwide leaderboards.

Arcade Saga allows you to take the role of a newly sentient being and battle for survival against A.I. Overlords determined to destroy you and your free-thinking. Through 3 different futuristic sports—Fracture, Smash and Bowshot—you'll harness your reactions and strategic thinking to shoot and dodge viruses, break firewall bricks and spin data-balls past the Overlords and their minions. You will need to use your reflexes, wits and changing strategies to survive.

Futuristic and action packed, this compilation game uses 360⁰ gaming, motion controls and positional audio with a nod to Arcade games of the past. Leaderboards for all allow you to gauge your progress against friends and family. 7ad7b8b382 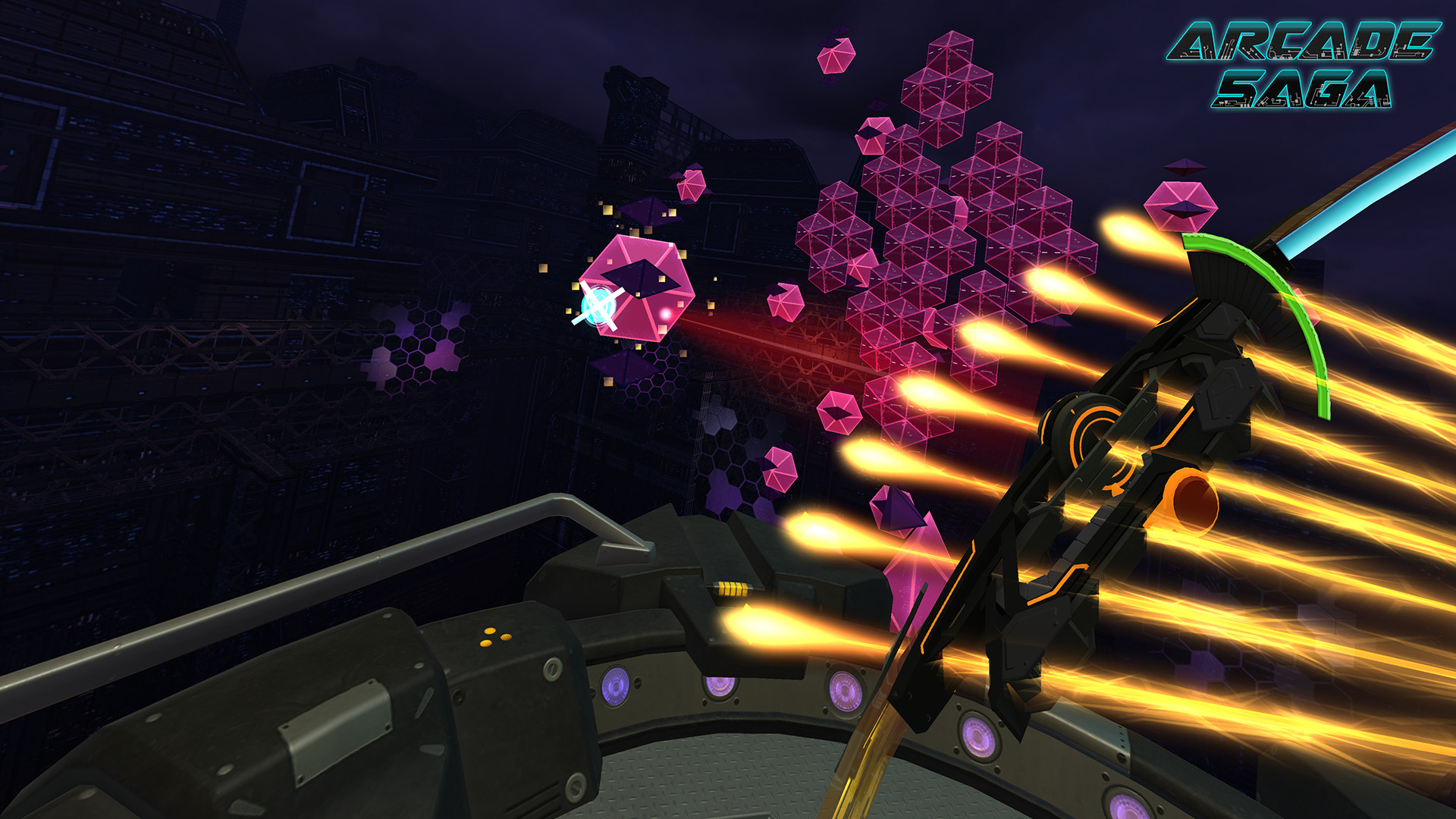 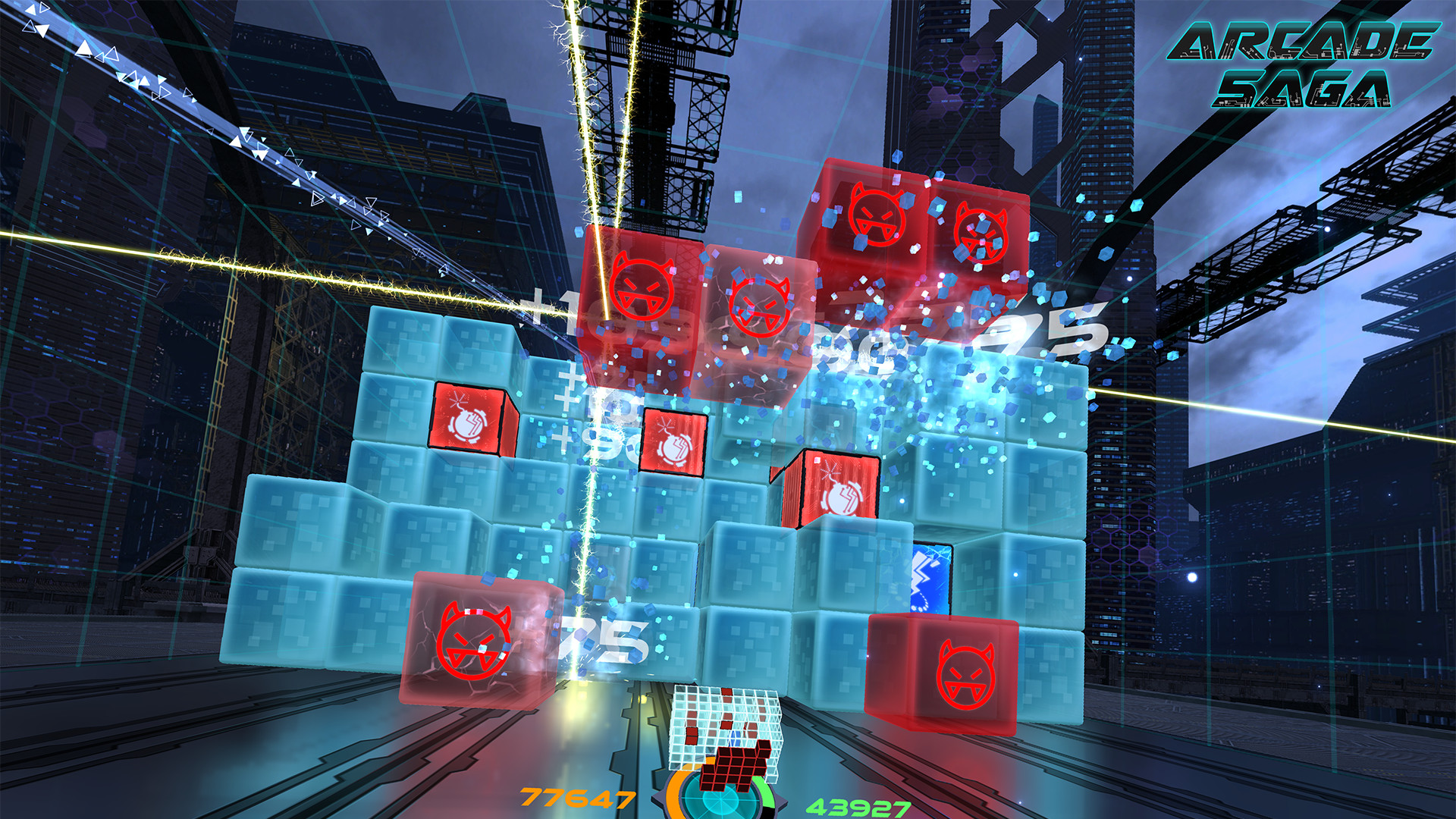 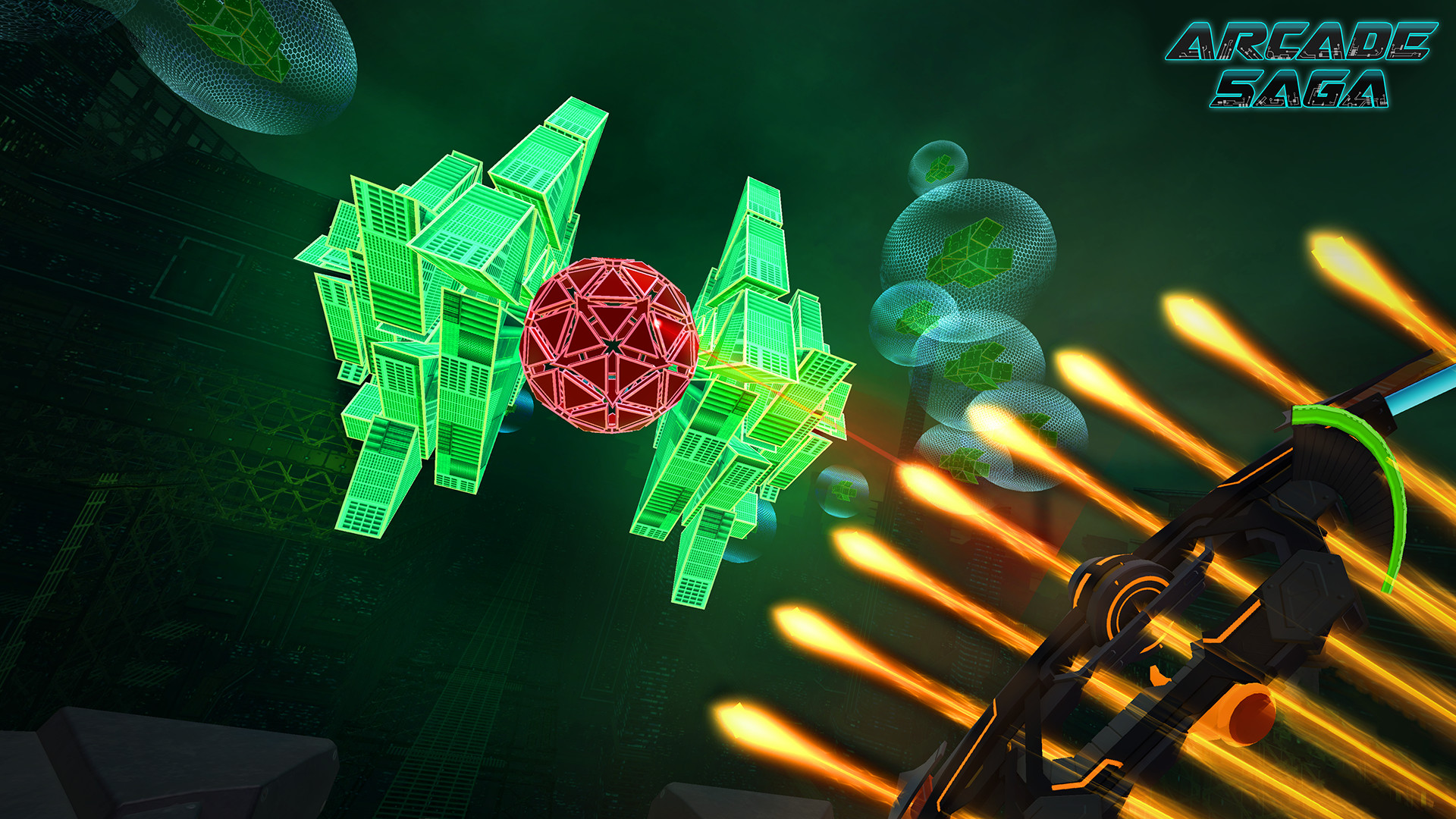 From the graphics, to the music, to the power ups and achievements it truly feels like you are stuck inside an arcade game. There is voice acting, a small 'plot', well done tutorials, and three games to choose from which helps keep you from getting bored.

Thus far it has been a blast. It shows off the Vive system fabulously and really feels like a AAA game. I highly recommend getting it if you are a fan of the old classic arcade game feel, albeit with a modern twist.. I love VR and have been so excited to see it grow, so I've been happy to buy a lot of less polished games for the sake of experiencing something new and supporting new studios doing VR. I was excited to see this because I imagined it as "first party" content. Something polished and worth waiting for.

Wow. No. I was very wrong. This is probably the least polished and least fun game I have played on the vive.

I bought it one of the first days it was out and all the reviews were glowing. "The kind of game that sucks you in" "You will want to play for HOURS." "The sound and visuals are top notch". It sounded perfect.

I would be disappointed by this game if it cost even $5 because of how unfinished it feels. Free VR games have felt better. I look forward to each level ending to give me relief from having to play these games.

The three games are incredibly simple and, more importantly, not fun. In all of them the physics feels so sloppy and floaty that it's hard to predict how to actually play\/move.

Bowshot is fast and chaotic but feels like you're just being assaulted by so many things that it's a race to (your) death. I would pick The Lab's archery game ANY day.

Fracture has just the most insane physics, and to 3-star the levels, you have to destroy EVERY block. That isn't hard in a regular "brick breaker" game, but in this one you're standing in a room with block floating 100ft above you trying to hit a 1ft diameter ball at it. Not at all satisfying. I would guess that maybe I'm awful at this game, but even doing what seems to be terribly I'm in the top 100 global scores so...either no one is playing, or no one is winning.

Smash is a little fun...it's like Holoball but worse. The physics again are weird and floaty, the impact of the balls feels off, the randomness of the powerups is bizarre. And it all takes place in what feels like a futuristic sewer pipe.

That brings me to my next point. The visuals? Garbage. Muddy textures, no shadows, poor reflections, static background. It's really about as poor as I've seen in any VR game. The sound too makes me embarrassed for the creators. The voice of the main AI sounds like an announcer at Chucky Cheeses and they call themselves the "We" which, in that high pitched enthusiastic voice, is impossible to take seriously.

All in all, I have not had any fun in this game, I am disappointed by what they delivered, and I feel faily lied to about what it was. The $30 price tag is outrageous for this type of game, but I can only hope they use those funds to make something more.... I own yet VIrtual Sports, from Vive Studios, than is just excellent (best VR tennis avaliable for any system by a big margin). I ever watched at Arcade Saga because of his many features, and especially progression and powerups. Something didn't convince me 100% for the full price, but during Summer Sales with a big discount I can't say no.

There are three (simple) games with ton of levels and a good polishing, but all of them are so so to play. It looks a sort of medley between Holoball, Holopoint, Racket NX and Cyberpong. From the quantity side is a winner, but still get old fast.

Let's hope than the next Vive Studios game (even Virtual Sports has two disciplines) won't be a collection of something, but just a single and full featured game good enough to be sold alone.. First of all, I got this game on sale. If I had paid full retail price, I wouldn't have recommended this game. However, I do recommend this game at $5 or even $10. Each mini-game runs smoothly without any errors. There are power-ups and bonuses that enhance and add variety as you progress (along with added difficulty) and, of course, there are leaderboards. The main benefit is that you will get a workout (for those who hate to exercise otherwise). Not all 3 mini-games are of equal value however. Also, if you have a friend, you can PvP (you probably won't find a game otherwise but add me as friend if you want to PvP).
Here's my review broken up:

1) Bowshot 9/10. This is the real gem from the "arcade saga." A lot of fun. Very fast action, you have to move around to avoid shots and quickly shoot back and/or powerup your shots. 360 degree moving targets, shooting at you so you have to keep moving, you get the idea, very challening and unlike some reviewer said, the LAB bow mini-game is NOT more fun LOL. I don't know any other bow game that is this fast paced and makes you move around as much as this with enemies everywhere. There's prettier graphics on other shooting games, but not one that will make you move as fast and shoot as fast as this.

2) Smash 7/10. Very fun, you get a nice workout. Reminds me of Ripcoil (Oculus) or Holoball. The graphics aren't as good as Ripcoil, but it has more variety in the gameplay. I like the small hallway, as it means you can focus more on small movements to return serve. So it's more about strategy and timing than moving physically fast.

3) Fracture 4/10. Very much like Boom Ball Kinect (almost exactly the same) or RacketNX (RacketNX is way more fun). It's hard to control the swing of the bat to make the ball go where you want. Very frustrating. Just not too exciting even if it was easier to aim. You move the least in this game as you mostly just swing (you can summon the ball close to you to hit it)

So 2 of the 3 games are fun and even the last one is not bad for a change-up. Definitely buy on a deep sale.